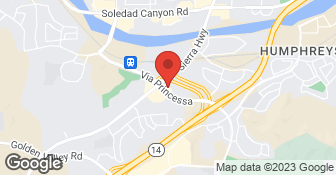 They were terrible. We won't be using them anymore. The way that they portrayed themselves was that they were a company that had satellite providers, but when they came, it was just like anybody off the street cleaning the windows. They had a language barrier, and when the job was done, they made it more expensive than they originally said it was when we made the appointment. I wouldn't recommend them, and I definitely won't use them again. It ended up being between $200 and $300 and they didn't do a good job. There was a language barrier so if we wanted them to do something that they said they would do, they said they didn't understand. They were there on time. They said they would clean all the external windows, and we have 2 story windows, and windows on the walls, and when we wanted them to go ahead and clean the windows on the 2nd level, they said it was not included.

They told me that they didn't work in the N.Phoenix area.

Description of Work
When I actually called, to set up my service, roughly 8 months later, I was then told that they didn't service my area, of N. Phoenix, though at the time of my accepting the offer, it did not show that they were {only} located in Santa Clarita, Calif....Had that been the case, then I obviously would not have chosen their business, in the first place.

Excellent work. Will be using him again this year.

Description of Work
Cleaned windows inside and out, including a skylight.

Nothing exciting here, the gutters were cleaned as promised.

On time. Polite. And hard worker. Made sure I was satisfied before packing up.

Description of Work
We purchased a big deal from them. It was $85 for four hours of deep housecleaning.

The cleaners removed the window screen but while cleaning them, they destroyed my windows screen. I have very high windows and the cleaners left behind water marks all over, did not look very good.

The young guy who did the work was prompt and professional, but not well trained. He power washed my patio BEFORE blowing the leaves and sticks off my roof, so all the debris landed on my just cleaned patio, and he didn't follow up to clean it off. He forgot to do the garage door and was all packed up when he asked me to inspect, so I just let it ride.

Failed to bring ladders to wash windows and then used our patio furniture instead.

From start to finish this company was professional, easy to talk to, no arm twisting, up front about everything. There were no surprises (other than the washer being prompt, working so hard, doing such a good job). It could not have gone better. Perfect!

Description of Work
Three story townhouse, windows were washed inside and out, along with the screens. After showing up on time, the window washer worked non-stop for many hours and worked hard, despite the 100+ degree temperature outside. He gets an A+ for the work he did.

I thought that was false advertisement and wasn't happy overall. They only do one side of the window and count it as a window on both sides. I guess it was okay for window cleaning.

Description of Work
They did window cleaning service for me.

This was not good. They came in and did not do a good job. Their attitude was like they did not want to be here. They kept calling for additional cleaning.

Description of Work
They did external window washing.

It was good! they were professional and did a beautiful job.

Description of Work
Clean our windows

they were late beyond the window they provided. Nothing was done.

After purchasing the Big Deal, the provider contacted us promptly and was helpful in explaining the service. They explained that an additional area we wanted to clean would cost a reasonable amount more, on top of the Big Deal, which seemed fair. They arrived on time. The wood was turning green before the service, but looked perfectly clean and new after the service. Our only concern was that one thin wooden banister was nearly broken following the treatment, which we understand can be common with power washing.

Very professional, showed up on time and did a great job!

Description of Work
Cleaned outside windows.

They came on time. Did the work fairly qiuckly & well. Left no mess. Some of the windows were very high, 2nd story, and they looked great. This work was done on a special offer but hey seemed to do all as if it was regular cost.

Description of Work
Washed all exterior windows and screens.

Everything worked out great. He mostly did high, very hard windows like skylights and very high windows. He did a thorough job of cleaning the screens and windows. I will call him for help in the future.

Description of Work
He cleaned a large number of very hard to get to windows including my skylights and high windows. He worked for the 3 hrs I had contracted with and even though I still have windows to clean myself, he did everything I really couldn't do. Excellent results.

They worked quickly and did a pretty good job.

this was ages ago..i don't want to write a review for I can't remember that long ago. please remove this request today please. thanks, shelly wenguer

They were awful. The window cleaning was really bad. After they were through, the windows weren't cleaned. They were in and out rather quickly. We would never go back to them again.

Description of Work
It was a Big Deal. They cleaned windows.

All went fine. The cost was more than initially expected.

Description of Work
Cleaned all windows inside and out.

They accomplished a very large job and tackled very dirty windows and screens well. It was a good value; they are hard workers and do a great job.

All of my window screens were rescreened. They did a good job and I would recommend them I did not include the cost of the service because I do not remember what I paid but I remember thinking that the price was reasonable

Description of Work
Rescreened all of my windows

America's Best Inc is currently rated 4.3 overall out of 5.

No, America's Best Inc does not offer a senior discount.

No, America's Best Inc does not offer warranties.