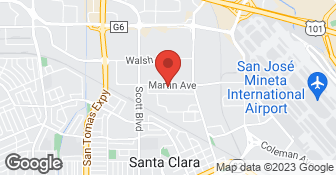 Turn to EJ Plumbing for all of your Santa Clara plumbing needs. The family owned company has established itself with a great reputation thanks to the hard work of the talented plumbing experts as well as the endless list of positive reviews from valued customers. With low prices and specials, it’s no wonder that the team of dedicated technicians is the highest rated plumbing company in the area. They have received accreditation from the Better Business Bureau, a prestigious international organization that recognizes businesses for their hard work, knowledge, and memorable customer service. In addition to their numerous recognitions, the team also offers same-day emergency services for your convenience, safety, and comfort. For a satisfying plumbing service in Santa Clara and the surrounding areas, reach out to the professionals at EJ Plumbing....

fix back up plumbing and they were great

This is the worst company I have ever dealt with. They sent me a guy - with a 10 year experience, as they claimed. The experience clearly did not help him, as he flooded my basement, even after I had warned him that there was water in the pipe the day before when we carefully opened it. I even showed the buckets of water that we drained previously. Then after the whole laundry was flooded with stinky stuff, he promised to clean and then told me he did not know what the problem was and he was NOT BEING PAID for making decisions.... Ah? Why did you even come then if you cannot make decisions on what has to be done? Anyway, wasted a day with them. Don't waste yours.

Job: Replaced old cast iron sewer line, trenchless, from house to city main. I got three bids, but knew immediately I would chose EJ Plumbing because of how engaged and real Jose Luis was. He came out to inspect and bid. Educated me on the whole process. He's the guy that gets the job done with his crew. Then for inspections, Benjamin and Danny step in. We passed inspections with flying colors. The yard was put back exactly as found. The only bump was West Bay Sanitation. They surprised us with a requirement to put their clean out 2ft inside our fence line. I am not delusional about regulations. I get it. But our main sewer line is in the easement 8ft behind our back fence. We've lived in our house since 1960. Nothing could be grandfathered in. You have to be approved for sewer line replacement permits with the City of Menlo Park and West Bay. Both require their own clean outs. This meant the 2 clean outs would be within 15 - 20ft of each other. One for the city 2ft from foundation, and one for West Bay 2ft inside our fence line, which put the West Bay clean out in a crap location in our yard. Danny from EJ was patient and helped me navigate. George(?) at West Bay was short and didn't want to deal with me. The only way not to have the 2nd clean out in the yard was to have a notarized West Bay form saying we cannot use their free service if we have a clog. The good news is Danny advised EJ's 25 year guarantee covered any clean out service we may need between the house and the main. We opted for the later. Thank you EJ Plumbing for being fast and efficient! The best!

Sam, the repair person sent was proficient, on time, and did excellent work. The company support, Lewis especially, in dealing with the manufacturer was also excellent. After a series of bad experiences with plumbing companies, large and small, I think I have found my go-to plumber with Sam and EJ pluming.

Description of Work
Igniter not working on water hearer under warranty. Labor not covered by manufacturer.

First, I have used EJ Plumbing for years. Most recently a several thousand dollar pipe replacement a few weeks earlier. The reason I keep going back is that their price is fair but more importantly they stood by their work. Until this last time. It was a simple bathroom sink hair clog that required snaking. I had tried clearing it myself by removing the p-trap but the clog was deeper. And the old pipe that went into the wall cracked. Everything else was fine. EJ cleared out the clog/replace the pipe for $270 and signed a 30 day warranty stating "Tested everything no leaks." Except it started leaking a few hours later. They came back the same day and tightened what was an old pop-up assembly. But it kept leaking. They had to come back for a third time the next day and charged me $200 more to replace the pop-up. To be fair they discounted $75 off the original price. But ended up paying close to $500 to simply unclog a bathroom sink and only took 3 visits over 2 days - all while not being to use the only bathroom sink in the house. Reached out to see if they would address the issue but was ignored. Will be getting quotes from other plumbers going forward. Manny reached out to me directly after I posted this review. He made it right and my high opinion of EJ Plumbing has been restored. There are lots of plumbers who can fix your problem - or at least it seems at the time. But it is those that come back when things start leaking after-the-fact (as things tend to) that will continue to get my business. That's why I'll keep using EJ Plumbing.

My time is valuable, I have used EJ Plumbing twice in the last 4 months and both times they arrived when they said they would, I value that. I was convinced the disposal would need replacing as I did a good job of getting it jammed. Chris came out and worked diligently to fix it and save me the cost of the replacement, hooray!

Quickly, smoothly, and reasonably, especially given that they were able to get the repair done during the winter holidays.

Description of Work
Snaking a toilet, checking on a leaky faucet

Very nice service. I have recommended them to friends.

Overall: I don't mind paying top dollar for quality service, especially when it comes with prompt communication, arriving as scheduled, etc, but I also expect honesty and integrity in the work performed, and options that make sense to resolve the issue. Good things I have to say: They fixed the sewer leak quickly. They arrived on time as scheduled. Very responsive. Bad: Based on the repairs done, and limited 30 day warranty, and time spent, I believe $375 is steep for approximately an hour total of their time - it only took them about 15-20 minutes to perform the repair. He spent another 15-20 minutes inspecting underneath the house and reporting on other potential future issues, which I didn't ask for/agree to or expect to effectively pay for. He offered to provide a quote to replace the entire old iron sewer pipe, but when I mentioned that I would like to know how much it would cost, because it doesn't make sense to fix the leak for $375 if I'm also going to replace the entire sewer line, he then changed directions and did not to provide an estimate for the bigger job. The job was performed by using a saws-all to cut a small 1-2 foot section of existing iron pipe out and replace it with a piece of PVC pipe and clamps. Regarding the water hammer issue on the clothes washer, he initially mentioned that hoses exist with the anti-hammer device built in, but then went out to his truck to call the boss. He then came back and offered to add anti-hammer devices in the wall valves, but that they would have to open the wall, and that they had no guarantee that the work would resolve the noise, and quoted me $275. I found anti-hammer devices that screw directly into the back of the washer or directly to the existing valves, and existing hosing, on amazon. They cost $15 each. For $30 and 5 minutes of my time, the water hammer issue has been resolved. The most concerning issue I have here is that he even mentioned a similar solution, but yet somehow switched to resolve it after speaking with his boss to a much more elaborate and expensive solution with no guarantee.

Description of Work
Fix a sewer leak and resolve a water hammer issue with our clothes washer.

How is EJ Plumbing overall rated?

EJ Plumbing is currently rated 4.8 overall out of 5.

What days are EJ Plumbing open?

No, EJ Plumbing does not offer eco-friendly accreditations.

Are warranties offered by EJ Plumbing?

What services does EJ Plumbing offer?