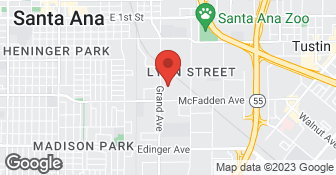 Description of Work
The moving experience is never easy, but Sale Rep Robert Presti sent a great crew of 3 to pack me up and get me into my new place. Excellent team that never complained and were very careful with my belongings.

When I first spoke to Jesse, he was wonderful. He would go out of his way to help me. It came the day of the move I had a desk that I asked to have put out at the curb and they said that they would. They told me that I would need to have cash or a money order. No one told me this prior to the move. they don't take credit card only cash or money order. The driver asked me to go and grab them lunch so that they could work. They didn't offer to pay me back, which I didn't mind. I couldn't recieve the money from my bank until the esgrow had been passed. I got a call from my bank around 1:30 to be able to go and pick up the money at that time. They told me that they would not take the desk and put it out at the curb. I had a big cabinet that was about 4 ft. wide by 6 ft. tall. They said they would take care of the cabinet. I left to get the money from my bank and ran some other errands. By the time that I get home, it was 4:20 in the afternoon and the guys in the truck are ready to go. They were smoking on the property and in the cab of the truck. I asked them not to do that because I didn't want the smoke to get to my furniture so that my furniture smells like smoke. I went outside to talk to them about something and they had already pulled away. I had to get my car to load and I only have a little bit of time because I had to be out of the house by 5:00 pm. I called Jesse and told him that I did not know when we would be moving in. He told me that if I had to be there another night then I would be charged each night that they would be in the hotel as well as for each hour they were moving. When we started to move all of my items in my house, the cabinet that I asked them to move they left back at my old house. When I called Jesse he told me that it was my fault because I should have done a walkthrough. I gave them $4880 and they never gave me the change. They never gave me copies of anything. When I called Jesse about it, he told me that he had sent it. My next door neighbor went to the house to make sure that my stuff was still there. I gave the phone number of the new tenants to Jesse to have them pick up the furniture to bring back to the house. They never reliquished the problem. I called for the name of the lawyer that represented him. He gave me a non-working number. I called back for the name of the lawyer and he would not give me any information. They were supposed to give me a 10% discount on the first move, but they did not. He told me that he gave me the discount. I told him to show me the papers. He told me that he sent me the papers and he never did. I have never dealt with anyone like this before.

Description of Work
They moved my stuff out of my house in California to my house in Arizona.

Affordable Reliable Moving Company provides dependable moving services for owners of residential and commercial properties based in Orange County. With 12 years of experience, no moving job is too big or small for us to handle. Our professionals treat customers with utmost respect and highest integrity. We use all certified green moving vehicles. We are fully licensed, bonded and insured for your protection. Our services include moving, full service moving, long distance moving, local moving, delivery, packing, unpacking, installation, and storage. We provide our professional services 7 days a week. We specialize in homes, apartments, office buildings and deliveries. We provide white glove, full service for all your needs. We handle our customers’ properties with great care as if they’re our own. We are honest, trustworthy, attentive to details, and good at keeping promises. We have a customer friendly pricing model. Call AR Moving Company in Orange County, CA now to talk about your moving services needs with our team, to schedule an appointment with us as well as to find out more about all of our available services.  …

We Move U, Inc

We Move U, Inc is committed to excellence in every aspect of our business. We uphold a standard of professionalism and integrity bound by fairness, honesty, and personal responsibility. Our distinction is the quality of service we bring to our customers. Accurate knowledge of our trade combined with ability is what makes us true professionals. Above all, we are watchful of our customers' interests, and make their concerns the basis of our business. We offer state of the art technology that allows each customer access to our customer portal which allows our customer to follow along with their moving truck and contact both the movers and the company at any time.  …

H2H Movers, a woman-owned and operated business, was founded on the idea that your move should be easy and stress-free. We are the full-service moving company you can trust to take care of your belongings—and you! Here’s how we do it: Competitive prices. You’ll get high-quality, personal service at the best possible price. Accurate quotes. Expect fully transparent pricing from the very beginning. Secure and efficient process. Our entire team’s priority is making your move as smooth as possible. Our trucks are stocked with moving blankets, packing supplies, and everything else needed to protect your belongings and keep your move efficient. People-oriented. Both you and our team matter to us. We work together throughout your move, and we fully train and take care of our team so we can all take care of you! A company you can trust. We value your trust, so we lead with integrity.  …

21st Century Moving & Storage is currently rated 3 overall out of 5.

No, 21st Century Moving & Storage does not offer eco-friendly accreditations.

No, 21st Century Moving & Storage does not offer warranties.