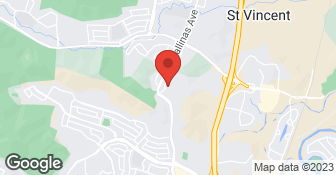 Dan is a Marin native that grew up in Novato and now lives in San Rafael. He believes in giving back to his community and has over ten years experience in plumbing. Dan's Plumbing & Sewer Service is also one of the few plumbing companies to really offer 24/7 emergency services!

I needed to replace about 3 inches long pipe because threads on one end rusted out. They replaced this pipe within about 10 minutes, connected a new simple garden faucet and presented me with a bill for $273.

Description of Work
Clean out sewage pipe from house to curb

Very well...hopefully all good for many many years!

It may sounds strange but this was an incredible service experience. The previous night I found that the sewer lateral clean out was overflowing and was pretty freaked out. It was too late to really do anything but I did find a top rated plumber here on Angies list and shot them an email. They got back to me early the next day and said they were busy but recommended Dan. I had also seen people recommending Dan on my neighborhood website and on another site. I called at 7:30 a.m. and left him a message. He called back within 1/2 hour which is AMAZING! He was super friendly and polite on the phone said he was available to come between 11 and noon that day. When Dan arrived, he was once again super polite. I showed him the problem and he got to work. It seemed to be a particularly gnarly block that was well down the lateral and required multiple spools of snake. A while later he was able to unblock it. He cleaned up the mess that the overflow had made and closed everything up. He updated me on the distance, what he thought the cause was (some roots), recommended an annual clean out of the lateral and suggested that I put a camera down it. He asked me if I had any questions and answered all of my questions in detail. He I was so impressed that I asked him if he does work on new construction / remodels (I'm starting a remodel). He said that right now he is mostly a service guy but maybe in the future. He then proceeded to ask me questions about the project, asked who was bidding on it and asked me who is bidding the plumbing. I told him and he confirmed that the guys bidding the job are good and gave me an idea of the landscape of the business. I asked him if he had a recommendation for someone else to bid on the project and he quickly came up with a few general contractor names and thought of one particular GC that would be good. He couldn't find the GC's card but called his office and got me the number. We parted our ways and when I tried to shake his hand he refused... He knew he wasn't clean and didn't want to get anything on me. Again. Amazing experience and I'll definitely be calling Dan again when I need plumbing assistance.

Our company prides itself o installing system that work to project you home and business. Drainage is unseen area of homes were built in the 1950’s or earlier. Due to age, quality of the materials, and dated construction techniques, many older homes are more vulnerable to the effects of water weather and aging foundations can shift due to soil conditions.  …

I have been designing, installing, and maintaining gardens for 18 years. My partner and I also install and repair irrigation systems. We'd love to hear from you!  …

Dan's Plumbing & Sewer Service is currently rated 4.4 overall out of 5.

No, Dan's Plumbing & Sewer Service does not offer a senior discount.