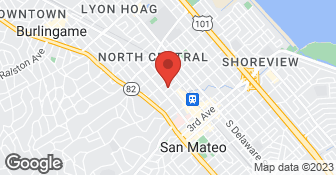 Innovation Painting Plus has always operated under strong values aimed at exceeding client needs. Our communication channels are always open—our relationship with our clients begins on the first day of contact, and only ends once they’re fully satisfied with our work. When you hire our services, you can count on us for the results you want and need. Get in touch today, and discover the advantage of working with Innovation Painting Plus....

Great work from Daniel and his team. Innovation Painting took care of our home in San Francisco. Prompt, friendly, and great attention to detail. After they were done painting, Daniel walked me around the property to go over things they uncovered while painting, like suggested repairs, which I very much appreciated. I would absolutely recommend Innovation Painting. Thanks!

Daniel at Innovation has done a couple of exterior house paintings for me, and a terrific job each time, at a decent price. He has good suggestions for the best treatment, supervises his team closely, and the job is thorough and clean. Highly recommend.

Daniel did a great job in repainting my walls, ceiling, doors, and trim. He was very thorough in his work and took care of a couple of minor repair issues too while working on the painting. He explained options for some aspects of the job to ensure I could reach the best decisions. He was very careful to protect furniture and flooring during the entire job.

I spoke to someone to schedule for an estimate, asked that I text my contact info and never heard from since. I would NOT recommend this type of service!

I called a few days before, and he told me he was booked out for months, but since this was a small job, he would fit it in. Everything was exactly as I asked, and I was able to get this job done on short notice. I used an Angie's list coupon.

Description of Work
I wanted two rooms painted before furniture was moved in. I got the paint

I was happy with the work done by Innovation Painting and the end result looks terrific. Also, Daniel was very good at keeping in touch by text as to times he would be arriving. This is such a professional and smooth running company I would gladly ask him to do painting in this house again.

Description of Work
He fixed holes in wall, sanded, caulked, primed and painted a bathroom in my residence.

They are doing the overall condo so the paint work is very sloppy. The lines are not straight and some of the paint overlapped to the next wall. There are things unfinished on the list. His refinishing of the cabinet are better than his painting of the walls so that really puzzles me because he's a painting company. I chose him even though he overcharges for his work, It's just an 800-square-foot condo and he's charging over $5,000. He's diamond certified so I thought he would do things on time and correctly without me having to fuss with anything, but that is not the case, I know. So far he says he's complete with his work, but I gave him half of the amount for the total and told him to patch up things before we pay him the rest of the house. It's been a nightmare. He is not on top of it, he should not be diamond certified or whatever that is, and I don't know how he got all those A's on Angie's List.

Description of Work
I used Innovation Painting Plus for exterior painting services.

Over the years I've had numerous painters provide services, and without exception Daniel Morra and his team at Innovation Painting Plus provided the most outstanding service. Moreover, the painting on this occasion was interior work in our home, performed while we remained in the house. The painters were always courteous, very careful to not damage flooring, artwork, or furniture and did the careful work most painters avoid, great preparation. The results were excellent!

Description of Work
They painted our home interior, both the first and second floor, and stairway.

Daniel is incredible. He is punctual, professional, and personable. We have had great experience with him over and over and will continue to enlist his services in the future. He's a gem.

Description of Work
Painted rooms and touched up