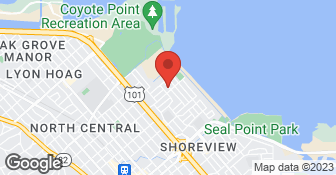 Eric Ruggiero owns and manages Beyond Builders, a company committed to providing highly skilled construction services for homes and commercial properties. We listen carefully to your needs and offer the best solutions possible, keeping costs in mind. Details are important and we pay attention to them. Whether it is a new construction project, a renovation, or simple repairs we can do the job for you. Call today for your free estimate....

First, let me say, as the overall designer and architect of the remodel, Eric made great choices for materials, fixtures, design of the kitchen, tile, paint, and flooring. If I could rate him on that, he would receive an A. However, my experience with him post-close as a service provider has been very disappointing and frustrating. It took two months for him to receive the correct part to fix the shower after he didn't order it, then ordered the wrong thing, then ordered the right thing, gave several excuses as to why it was taking so long, and then finally got the right part in. That would have been less frustrating to deal with if I could have received regular updates from him; instead, the only time I would receive updates would be when I reached out to him to check status. He was out of town a lot of this time, so this made it even more challenging. He didn't want to send someone to just remove the lockbox, so that remained on our outside faucet for two months until he could update the shower. This made us uncomfortable knowing that any one who had a key to the lockbox could potentially break into our house. And, finally, the garage door opener still does not work. We have to manually open and close it since something is wrong with the mechanism, and my partner has gotten hurt trying to do this. Last weekend he finally sent someone out to handle all three of these services, but his employee was unable to determine what was wrong with the garage door. The employee said that Eric would call us to talk about it, but we have yet to hear from him. I am just going to call our home warranty company and pay the $80 to have them fix it. We would have done this at the beginning, but Eric said he would look at it since it stopped working the week after we moved in. All in all, a very frustrating experience from a provider who was either so busy he could not take the time to follow up or communicate, or he did not care about a customer who was not paying for his services. I expected a more professional response and experience and will not be able to recommend him to anyone I know looking for a contractor or service provider in HMB.

Description of Work
Eric at Beyond Builders was the general contractor for the remodel of the house we purchased in Half Moon Bay. Although we have not had to pay for his services, he has been responsible for fixing several things that were wrong with the house on the day of closing, as part of the conversations we had prior to purchase with the seller and Eric. The main services were to fix the shower faucet in one of the bathrooms; remove the lockbox from the outdoor faucet; and fix the garage door mechanism.

‏At Prime renovation homes, our core principle is reliability. We are a small and attentive team that specializes in assessing your vision and transforming it into an exceptional project that meets your needs. From design to architecture, to engineering and completion, we will work closely with you at every step of your project to ensure that the end result is outstanding, on time and on budget. With a collective 15 years of extensive home construction experience, we look forward to the opportunity of working with you in creating the home that you envision. Whether you’re an avid home remodeler or this will be your first home construction, our goal is to provide you with the best experience from beginning to end and we welcome you to contact us  …

My team and I at MC Electric have served customers from the Bay Area to San Jose and the surrounding areas with highly-qualified fully-insured electricians. Our electricians are known for being responsive, accessible, flexible, and extremely knowledgeable. MC Electric has the skills and expertise necessary to do all electrical work, large or small, on all types of residential, commercial and industrial buildings. All of my work is warranted and 100% satisfaction guaranteed! Don't get shocked twice, get the right contractor. Call Monte at MC Electric.  …

Remodeling: It is time to upgrade, update, or refresh your home. Or, maybe just one room. We will get the job done with attention to detail, excellent execution, and minimal disruption. New Construction: It is a big, important job and you want it done right from the ground up. Beyond Builders is committed to excellence and that is what we will deliver for your project. Handyman Services: We provide the expertise you need to fix those nagging projects. For instance:

How is Beyond Builders overall rated?

Beyond Builders is currently rated 2 overall out of 5.

What payment options does Beyond Builders provide

Beyond Builders accepts the following forms of payment: MasterCard, Check

Does Beyond Builders offer free estimates?

Does Beyond Builders offer eco-friendly accreditations?

Does Beyond Builders offer a senior discount?

No, Beyond Builders does not offer a senior discount.

Does Beyond Builders offer emergency services?

Are warranties offered by Beyond Builders?

What services does Beyond Builders offer?

Beyond Builders offers the following services: Remodeling: It is time to upgrade, update, or refresh your home. Or, maybe just one room. We will get the job done with attention to detail, excellent execution, and minimal disruption. New Construction: It is a big, important job and you want it done right from the ground up. Beyond Builders is committed to excellence and that is what we will deliver for your project. Handyman Services: We provide the expertise you need to fix those nagging projects. For instance: