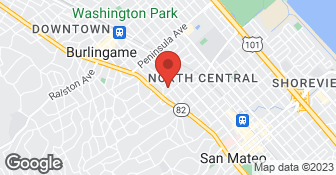 5K Design & Construction, Inc., an innovative design and construction firm, is a locally family owned and operated company with a cumulative of 100 years of experience. 5K incorporates a highly seasoned and experienced design and project management team and is one of the few sources on the mid peninsula and the greater bay area for professional design and quality construction. 5K will assist in customizing your project from inception to completion with ease and at the same time, meet your functional needs, individual taste and create your dream environment....

It is with regret that we write this negative review of 5K Construction. We have had 5K do numerous repair and remodel projects on our house over the years and the results, up to now, have been satisfactory. However, the last project, which was done in the late summer of 2012, did not go well. 5K was hired to repair our rotted out laundry room door jam which involved removing and then reinstalling the laundry room door. 5K was unable to reinstall the laundry room door in a leak-proof manner. Whenever it rained, in late 2012 and winter of 2013, water seeped in and covered a portion of the laundry room vinyl floor. 5K came out three times, during their one year warranty period, to try to fix the problem. They installed a new door threshold and filled in a gap they had left open between the threshold and vinyl floor. None of their repair attempts were successful. Over the summer, we noticed the floor area near the door was soft which meant the underlayment and subfloor had rotted. 5K claimed this was a ?pre-existing condition? even though the floor area was not soft prior to their work on the door and they had never informed us of this ?pre-exisiting? condition. We tried to get 5K to fix the floor area but they refused to respond to our request so we hired 2 other contractors to fix the floor. On Sept. 21, 2013 there was a strong rainstorm and water flowed in again all over the newly fixed floor! We again, contacted 5K, via phone, email and US mail, to fix the laundry door so that it would be leak-proof. They did not respond to any of our correspondence. Finally we hired another contractor who discovered the threshold was poorly installed, there was inadequate weather stripping installed around the door jam and the strike plate was not tight enough for the door to close tightly against the weather stripping, which allowed water to easily come in. He fixed all these problems. We invited 5K to come view these solutions and asked them to reimburse us for the repair of their unsuccessful work. They, to date, have not responded. 5K offers a one year warranty on their work. We assume this includes a year from the time of any repairs, not just the original work. In any event, the bottom line is that they were unable to resolve the problem. This is poor quality work and we expected better.

The roof/deck repair was interrupted by rain. 5K did a good job of sealing the house during the rains so that work could continue and water did not get in. In general, the carpentry was good and completed on time. 5K was not able to recommend a satisfactory roofing surface so we home owners had to do the research.

Description of Work
5K repaired a roof/deck over our laundry room which had failed. The work required replacing part of the roof/deck as well as repair of ceiling and wallboard. They also removed and replaced a sliding glass door, replaced and painted stucco.

5K Design & Construction Inc is currently rated 2.5 overall out of 5.

No, 5K Design & Construction Inc does not offer eco-friendly accreditations.

No, 5K Design & Construction Inc does not offer a senior discount.