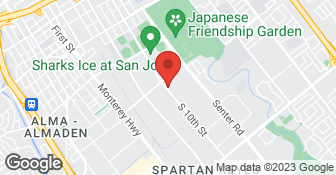 It went great from the first interaction for a quote to the actual work done.

I don't normally give bad recommendations, especially for a company that is obviously quite skilled at what they do but boy, do they need help in the customer service department. When I called for an initial quote, I had to call a couple of times to get an appointment for a quote. Julian came out, very nice and I enjoyed talking to him. He took measurements saying I'd get a quote in a couple of days. Called him a week or two later to check status, no answer; called office to check status, he called back and I finally got a quote. Hired Meza...the work was done well, workers were professional and courteous, the two decks look great and Julian, like I said, was pleasant to work with even tho initially slow to respond. After the decks were done, I decided to have more work done and Julian encouraged me to call back as soon as I was ready to have that work done, so I did...one ramp was a bit shorter than I wanted (slope is too steep for old people), decided to have rails put around the large deck plus continue the redwood walkway down the side of the house and add a larger planter box. Took a couple of phone calls to get Julian back out, but I figured they were busy catching up from having been shutdown because of covid. when we finally connected, he came out and again took measurements and promised a quote. Almost 3 weeks later and nothing. Called the office, they promised Julian would call me back the next day and nothing. A couple of weeks later, 2nd call, again promised Julian would call and nothing. A couple of more weeks, 3rd call, this time no answer at all so left a message asking to please hear from someone...it's now been 2 months since he came out to measure and still nothing. Obviously they don't want or need my business so I'll have to find someone else to do the rails, etc. And next year when I replace the fence around my backyard, I won't be calling them. I also went back to 2 people I had recommended them to and suggested they find someone else which is really too bad because they did do really good work but their lack of response is very discouraging.

Great! Even replaced gate latch free! And moved heavy planter gardens for us.

During the visit for the estimate, Louie did a great job explaining the best fence to install. The two workers who did the job were professional, very respectful and paid attention to detail. They made pyramids/mounds of the Quikrete around the base of the pressure treated 4x4s, the right way to help prevent water rot years later. Also, the price was better than another fence company for the exact same project. Excellent work. I'll hire them again when we replace the rear fence section.

Description of Work
Installed fence shared with our neighbor

Excellent. Came on time, did the work exactly according to the quote, and cleaned up nicely. Got a couple of quotes and theirs was most reasonable and their quote package provided the most information. In the pricing (below), note that this was the total cost for fence and gate. (I split with my neighbor, but for this survey I have added the two amounts together to get the total.)

Great experience from start to finish. The quote was reasonable and they offer a better warranty than the other 3 companies I got bids from. The project took two days. The crew were on time both days and left the place clean and debris free. The fence looks great.

Very well. They showed up on time and finished on time. The fences look great. When my neighbor and I decided at the last minute that we wanted a gate in the back yard fence, they quickly added it for a reasonable cost.

Description of Work
Two jobs: replace 75 feet of linear fencing in back yard, and replace side yard fences, including 4 gates.

They didn't show up at the scheduled appointment time for an estimate.

Meza was quick to respond to my quote request and set an appointment, but they never showed or contacted me. When I contacted them about the no show, they did not apologize and asked if I wanted to reschedule. This is not customer service. I can appreciate a mistake, but take ownership.

Description of Work
Made an appointment to get an estimate for my fence.

They were late showing up but did the work on time. However they used things in my backyard without asking and ruined my hose. I’m not sure why they were using mine to begin with since as a fencing company it would hardly be a surprise that they needed water for the concrete footings. I asked them to return and fix the issue and they agreed but never showed up.

It was a small job and they declined because of that fact. It was fine as I did tell them up front it was small job.

Description of Work
New fence door to back yard..

Louie came quickly to do the estimate. He is a real gem: personable, efficient, eager to give all the information you need to make a decision. Frankly, I was almost shocked at how speedily the work got done, considering that a huge storm had blown through the area. Great experience all around

Description of Work
Repair a fence collapsed by storm; replace a gate

Location was too far away. Only contract on the list.

Description of Work
None aaaaaaa

Everything from beginning contact to final fence completion was done with utmost professionalism. Would hire them again!!

Very nice work. The workers came and did a great job. Julian was very helpful in my choosing of what type of wood I should get. Would use Meza's Fence again.

Description of Work
Replace a side yard fence

The fence looks great and the workers were very professional. They did a good job cleanimg up when the job was through

They were responsive initially & came out to measure fencing right away. But it has been two weeks and they have not sent me a quote. I called them to inquire and make sure I didn't miss anything in email. I got a return vm just stating that they were from Meza's,but they didn't tell me why they didn't send a quote. I've heard/received nothing since. A simple "we're behind schedule" or "your job isn't large enough" would have been fine. I was going to sign with them as long as their pricing was reasonable, because they stated they were willing to save my climbing vines on one side of the fence and the person who measured the fencing seemed friendly. Too bad for them too because one of my neighbors is in real estate and could have been a great reference for them. Maybe if they get back to me, I'll revise this review.

Description of Work
Fencing--surround for back yard plus two gates and fencing for both side neighbors.

I'm so sorry for the experience you had with our company [Member Name Removed]. I will resolve this issue today as soon as I have my estimators in the office and I will get the estimate as soon as this evening delivered to you.
5.0

They did a great job and were very prompt on the estimate. They gave good choices and showed pictures of different gates and fences. They were very professional and left the site with everything cleaned up. I would absolutely recommend them.

Description of Work
They replaced the fence and gate.

The appraiser came out and reviewed the area. He gave me the base price and offered options of 4x6 post and knot free upgraded fence boards. I decided to go for the best. The appointment was scheduled to start in approximately 4 to 6 weeks. I was called 48 hours before arrival. The crew came out at 8:00 am and within 3 hours had all the old fencing removed. At this point they proceeded to build install the new fencing. There was one hiccup and that was the area where the double gate was installed. The concrete slants away from my house and to allow it to clear when opening and look symmetrical, the gap at the bottom was raised slightly . I approved this change. By 5:30 pm the complete job was finished. It looks wonderful. The next day, I noticed that one on the fence boards on the small gate was splitting. I called Meza's and without question, they scheduled the replacement within 48 hours. The board was replaced and the whole fence looks fantastic. I very pleased with their workmanship and would definitely hire again

They did extremely good work when they said they would. Very reliable.