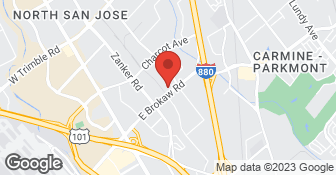 At the heart of Future Vision Remodeling is years of design-build experience. This means we handle all levels of projects from new construction to commercial conversions. We excel at kitchen remodeling as well as designing and installing luxury baths in San Jose. Outside your home we are just as capable. Look through our portfolio for the hard-scape, patio, and deck designs. We consider communication to be the most important part of the project and we promise to keep you informed about progress daily. We also promise to make sure all your questions are answered throughout the project. In the San Jose area, You can count on Future Vision Remodeling to be the only San Jose remodeling contractor you will ever need

The bathroom remodel went well. The completed work was beautiful and completed on time. Especially great job on the tile work. Would definitely hire again

Description of Work
Had a master bath remodeled

Future Vision Remodeling is one of the most professional companies I have dealt with. Not only are the project managers punctual and knowledgeable, their office staff are diligent and handle any problem to the best of their ability. I would highly recommend hiring them for any project.

The project was complicated because we found after demolishing the old bathroom that our plumbing and water heater needed to be replaced which increased scope and timeline. Future Vision was quick to help us problem solve and adjust the plan, and did high quality work so we are very happy with the results.

Description of Work
Bathroom remodel and replacement of plumbing

It went very well. I am very pleased with the final results and would definitely hire them again.

It went well, pleased with results

Description of Work
I had a couple of rooms redone

The finished work turned out beautifully but the length of time it took the crew to complete the job could have been better. The project manager was great to work with and very responsive however there are a couple of small details that I am waiting for them to resolve.

Aviv was so helpful and even went to the City of Mountain View. He reported back that the project was doable but that City permits, architectural designs, and on and on, the cost would be triple what we could pay. He suggested various alternatives to consider. He was honest, prompt with information, and most helpful. Aviv and FVR deserve high praise.

I interviewed several contractors based on reviews on Angie's List, Yelp, and Home Advisor, and while the bids were similar, I selected Future Vision because I felt that Guy really listened to what I wanted and responded to that. Throughout the remodel he always gave me choices and helped me think through what I wanted, and never tried to sell me something different. I had everything taken out down to the studs, and new floor and shower tile, new vanity, toilet, shower, lights, fixtures, etc. I especially love the tile on the shower floor and in the niche, which is made of small stones cut off flat. The overall process took about six weeks, but I had let them know I wasn't in a hurry; some of the delays were due to my needing to make a choice, and some due to waiting for required city inspections. Throughout the remodel the whole team kept in contact with What's App, and that worked really well.

Description of Work
Complete remodel of the guest bathroom

We had this company "Design" and sell us a solar system that would cover our energy bill. After installation, we found the system didn't produce anywhere near the projected output. Many complaints were made with a terrible lag time. Typically 2 weeks or greater. We live in the Bay Area and found out too late that Future Visions solar install team are all from southern CA. That explains that. We thought we were doing business locally. What a mistake. Since the production was so bad and Future Vision claimed the system was working well, we hired a third party solar company to inspect the system. A $300.00 service. They found many issues like broken tiles, panels not installed to code and bad wiring. The third party solar company made the electrical repairs that Future solar vision couldn't even detect. After a long discussion with the third party solar inspector, we found that we overpaid for our system. He offered the same system for $6K less. I was willing to pay extra for superior service and installation, but that didn't happen. More complaints were made to FV. Future vision agreed to pay us for the money lost in months of our energy bill along with the $300.00 service charge to hire an outside company to expose their errors. They have not reimbursed us. It's been 8 months of dealing with these guys and the problems they created and the regret is huge. We ordered a 5 star steak dinner and received a cold hot dog with nothing on it.

Substandard work by non English speaking young men. Their motto should be , Oh we can fix that. Never use these guys. I have pics and a thick binder of the mess. Wrong paint, poor quality wood work, cracks developing around shower. Oh we can fix that....They caused but denied a leak that caused an entire wall to get soaked. They would fix it for 3k more.

This is Rupert and my team at Summit Deck Doctor. We offer Deck Finishing, Deck Repairs and Deck Build within 25 miles of Los Gatos. We know you have a choice and hope you will choose us! There are three things that make us different from other contractors: LOOKS BETTER, LASTS LONGER, JOB DONE. Here’s why: 1) LOOKS BETTER. a. We avoid lap marks where two layers overlap. Not every contractor understand the import of maintaining a wet edge to avoid these dark marks on your deck. B) we stain the edges of the boards so you don’t get “zebra stripes” – very visible and distracting drips down the sides of the boards (other contractors charge extra to fix this), c) we use lots of drop cloths to avoid spills (so no more careless mess below the deck). 2) LASTS LONGER. a). We use reliable durable stains, not the cheapest ones (unlike other contractors), b) we use hybrid stains, not environmentally-unfriendly and smelly oil stains which have very poor durability. c) we apply stains in the shade or the cool of the evening to allow stain to sink in and so they last twice as long (unlike contractors who don’t seem to read the instructions on the can which say “don’t apply in sunshine”). 3). JOB DONE. a). I will be coming to give you the quote and I am the owner (unlike other contractors who send a sales guy who might make promises the company can’t keep). b) I will write up the quote then and there (no waiting a week for a contractor to type it up), c) I will be calling you every night during the work to make sure you are happy. IN SUMMARY: We put special care into refinishing your deck and handrails so they look stunning, in giving you twice the durability of other contractors, and in getting the job done efficiently. We believe we halve the cost of refinishing your deck because we apply stains in a way that doubles the durability of your deck finish which means you have it done once not twice, saving you money. WANT TO KNOW MORE? Download our 90 page book "Deckology; The Art & Science of Deck Finishing and Carpentry" which explains the refinishing and carpentry process. (Look for deckology33.pdf). WE WON’T LET YOU DOWN. We have worked on over 1000 decks, have been in business for 12 years, are accredited at A+ with the Better Business Bureau, are a Super Service Award Winner at AngiesList.com with over 50 reviews, have a 5 star rating on Yelp with over 38 reviews, and are certified by the EPA for removal of toxic finishes. We are licensed, bonded and carry workers compensation insurance for your protection. We offer Fixed Prices, which include all labor and material expenses; this gives you peace of mind with no hidden costs. Our payment schedules are all milestone-based, which means you pay only when a milestone in work is achieved, providing you with reduced risk and more peace of mind. Contracts are proper written contracts; nice and clear, and professional; how it should be. Unlike other contractors we work on your job continuously - no "dragging it out;” most jobs can be completed in 4 days' continuous work. We leave you a partial can of stain once we have finished so you know what stain we used, when it comes time to refinish the deck in the future. BEFORE YOU CALL. If you really don’t know what these things cost, then it would be helpful if you can estimate the size of your deck by pacing it out – so we can give you a ballpark estimate when you call PLEASE NOTE: Don't forget to read our reviews in both "Deck Maintenance" and "Decks and Porches" categories.  …

Bonded
Insured
All statements concerning insurance, licenses, and bonds are informational only, and are self-reported. Since insurance, licenses and bonds can expire and can be cancelled, homeowners should always check such information for themselves.To find more licensing information for your state, visit our Find Licensing Requirements page.
General Information
Free Estimates
Yes
Eco-Friendly Accreditations
No
Payment Options
Visa, MasterCard, Check
Warranties
No

At the heart of Future Vision Remodeling is years of design-build experience. This means we handle all levels of projects from new construction and home additions. We excel at kitchen remodeling as well as designing and installing luxury baths.

Future Vision Remodeling is currently rated 4.1 overall out of 5.

No, Future Vision Remodeling does not offer eco-friendly accreditations.

No, Future Vision Remodeling does not offer warranties.