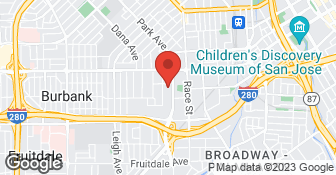 Eastman Roofing & Waterproofing is a family owned and operated company serving roofing needs in the San Jose and Silicon Valley since 1979. We do something completely unique in our industry. We make the process of getting your roof repaired or replaced easy and hassle-free. Our goal is to achieve 100% customer satisfaction by educating the client about problems, products, our people, and pricing. We assess the condition of the roof and discuss the pros and cons of all options with the customer. Our entire team is committed to courteous, timely and honest service and only professional craftsmen will work on your roof. Our pricing is fair and competitive. With more than a 30 years of industry experience, our company holds both a General Contractor’s license and a Roofing license. Because Eastman Roofing & Waterproofing understands the relationship of the roof to the entire building (some roof problems are actually construction issues), we can offer our customers far more quality, consistency, and peace of mind....

Excellent. From estimation to execution, the team was impeccable. The recommendations were appropriate and accurate. The backdrop: all other roofers stated I needed a new roof. My roof is only 3 years old!! I called Eastman for a new roof; Eastman estimator recommended I repair instead. He looked at the roof and nailed the repairs; he estimated the roof had another 10-12 years life left!! So - a new roof at $27,000 versus Eastman's approximately $800 !!!

It went great! I think this company may have been recommended by one of your recommendations which was more geared to total roof replacement but do not remember which company it was. Anyway, we were very grateful for the recommendation.

Wanted a roof inspection before the rains came. They did it for free! Will definitely use them when I do need a new roof!!! The best!!!

They came to assess punctually. They called to schedule an earlier date than originally planned (yippee). They came when they said they would, did the work, then sent me photos as well as the invoice. SInce we have had only a couple of short rain events in the few weeks since they were here, I can't yet fully assess the success of the repair (ask me again in April). But after being turned down or not getting my calls returned by several other possible resources for the one small leak I had, I am extremely pleased with the professionalism and ease of dealing with Eastman. They also offered a 10% discount for payment within 5 days.

I called Eastman early August and talked to Cheryl who said she would get back to me regarding the next available time for an estimate. I received given a time and date for an estimate by email, along with the estimator's name and phone number. Dave, the estimator, was right on time, extremely friendly and courteous. He examined the roof and determined it could be fixed as a minor patch and repair. He took pictures to show me exactly what was involved. I was very impressed that he didn't try to convince me to replace the whole roof although he said that it would be ready for complete replacement in approximately 2 years. Within 2 days, I received a complete estimate via email after which I scheduled a date and time. They assured me that I did not have to be present at the time of repair, even though it did work out that I could be at the site. I received a confirmation via email within 2 days outlining the whole agreement. Even though they could not get to the repair for a month, that was fine with me. About a month before the scheduled date, I received an email letting me know that a time opened a day earlier which worked out well. Again, they assured me i did not need to be present. On the day of the appointment, they called to let me know that the repair crew would be there in the afternoon and the crew called later to let me know exactly what time to expect them. They arrived right on time, completed the job, took pictures to show me what they did. They told me I could send the payment in or pay online at the website. They gave me a pay early discount. About a week later, I received a thank you note from the owners. I can't remember when I have been treated with as much courtesy and respect as i was with everyone I interacted with. I have recommended them to friends and will definitely contact them with roofing needs in the future. Such a pleasure to deal with!!

Description of Work
Patched a small leak in my carport roof.

It went fine, but for $120 not much happened in terms of maintenance. My roof is in very good condition just few minor items called out on a prior roof inspection. Technician applied seal around few items, and then gave me estimate to do the remaining items. Their estimate was very costly but appeared to be good quality. I did not use them for the additional work items.

Description of Work
Apply seal and check up of other items.

I used to be the secretary/treasurer of a homeowner's association, and I was responsible for contracting repairs. We always hired Eastman to inspect and repair the roofs. Once they make a fix, it never needs follow-up work. They always show up on time and clean up well afterwards. The office is very well run -- it is very easy to make appointments. They are also very accomodating to show up on short notice to fix urgent problems.

Dear Mr. [member name removed]: Referral's are the backbone of our business and we do appreciate you taking the time to post your kind comments on Angie's list. We strive for 100% customer satisfaction and it is gratifying to know we met that expectation with your roofing needs. Thank you and Best Regards, Linda Eastman Vice-President Eastman Roofing
5.0

It went well. They kept me informed. Followed up and completed the job as indicated

Description of Work
Repaired my roof

Dear Mr. {removed member name}, Thank you for your comments on Angie's List. It is a pleasure being able to help with your roof repair needs. If ever if we can be of further service to you, please do not hesitate to call. Sincerely, Jim Eastman President Eastman Roofing & Waterproofing
4.0

Roof was in good shape with only a few place that needed some gluing down. Inspector took some before and after photos and said they would send a report later. I never got a report. No issues, except for not seeing a follow-up report.

[Member name removed], Thank you so much for your Angie's List post and for bringing to our attention to your request. Because we had never run a special of this type with Angie's List, there was a bit of confusion for the inspectors. The inspector that went out to your property had forgotten that because of the discounted price of the special, no report or photos were part of the offer. However, since he did mention this and we did not realize he had promised this, we are more than happy to send a report with photos. (Please check your email ) Your comments have helped us clarity communication for this type of offer in the future . Sincerely, Linda Eastman Vice-President Eastman Roofing & Waterproofing, Inc.
5.0

They came out for a free estimate and quote. They were very good at explaining what needed to be done and showed me photographs of the things they suggested repairing. When the worker came out, he was very cheerful and professional. He got the work done in just a few hours and also showed me photos of the repair work completed. I would definitely hire them again. In my previous residence, the HOA ended up hiring them to fix a leak. It was the same leak another roofer tried to repair but could not. Eastman was able to fix it and the worker explained to me in detail how he was fixing it and how it will not leak again. From these two experiences, you can see that they take pride in the work they do and are happy to answer your questions.

Dear [member name removed], We are so glad that we were able to serve you. Thank you for taking the time to post your review. I will pass on the positive comments to our workers. They are always encouraged by such remarks. Best Regards, Linda Eastman Vice President Eastman Roofing & Waterproofing, Inc.

RA Construction has been a family owned and operated business since 1985. No job is too small or too big for Ron or his team. We take roofs seriously. We price our products fairly and work hard to make sure that our customers get exactly what they order. Owner Ron Andrews makes it a point to visit each jobsite and discuss any questions or concerns with the client. We want to provide the client with a superior roof at a great price. We offer warranty and insurance for all services provided. Our goal is to suggest and install a best of class Roofing System, using superior components available on the market and pay special attention to details and to customers' requests and needs.  …

We started in this industry in 1991 and are a locally owned and operated company that values honesty and integrity and treats your home as if it were our own. We offer a variety of gutter services that are customizable to each individual project. We pride ourselves on the quality of our work as well as our commitment to outstanding results. We look forward to building lasting relationships and guarantee your satisfaction! We offer gutter services (repair, installation, cleaning, and leaf-guard), pressure washing, window cleaning, termite & dry-rot repairs, roofing and more.  …

Above All Roofing Solutions Inc

Above all roofing Solutions Inc has been in business since 1997. We are a fully licensed, bonded, and insured company with a Better Business Bureau rating of A+. We offer free estimates, 24 hour emergency services and much more. Above All Roofing Solutions Inc has you covered from reroofs to repairs, gutters and downspouts for all types of residential, commercial, and industrial roofs. We are currently offering our summer promotion for $50 off any repair over $500 and $150 off any new reroof. With our expertise you wont just protect your roof but also beautify it. Call today for a FREE estimate.  …

Eastman Roofing & Waterproofing Inc is currently rated 4.8 overall out of 5.

No, Eastman Roofing & Waterproofing Inc does not offer a senior discount.

No, Eastman Roofing & Waterproofing Inc does not offer warranties.

Are there any services Eastman Roofing & Waterproofing Inc does not offer?