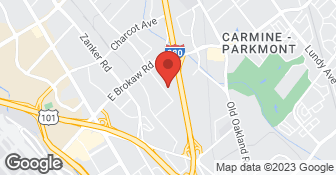 We are a family owned Heating & Air conditioning company that has provided reliable, responsive, on time service to homeowners and businesses since 1972. Dunrite Heating & Air Inc. never uses sub contractors, we employ no sales people, just family and employees. We exemplify the meaning of family owned. Our well-equipped trucks are often stocked with the precise part you need. We answer questions you may have in clear and straight forward manner. And our employees are highly trained, courteous and respectful — the kind you won’t mind having in your home or business. We get in, get our work done, and get out quickly to minimize any inconvenience to our clients. Additional location: 5879 Winfield Blvd. San Jose CA 95123. Award winning....

Since the heating, ventilation and air conditioning system is open and circulates air all the time, it is likely to accumulate dust and pollen and possibly fungi and bacteria as well. Rely on us, at Silicon Valley Air Experts to remove these harmful particles and to leave the surfaces spotless. Our company has long-term experience in the industry and is known for delivering optimal results in little time. In addition to cleaning all HVAC system components that get dusty and dirty, we can fix them as well. This is how we ensure high indoor air quality at all times.  …

Mike Counsil Plumbing has been family owned and operated from the start. Our customers are our neighbors, and we are proud to be part of the community. We offer the highest quality of plumbing, and friendliest customer service in the industry. When you want it done right, call Mike Counsil Plumbing. Owner operated since 1994. 50 employees. All technicians drug tested and background checked.  …

Mike is amazing, he is so well prepared and polite. He made a clear and reliable diagnosis and offered the best option to fix my issue. You can tell that he is not selling you but just providing you the best options. Thanks Mike!

Disabled Sr. .Citizen purchached AC maintenance after 6 month ignored & work never done |I called them & made an appointment; they didn't show up; they never called back; I've been ill or injured several times since then & couldn't cope with trying to reach them again. | |in the meantime; I've had a couple of falls up here on the hill & with instant heat supposedly arriving Sat & Sunday, I STILL REALLY NEED THE SERVICE I PAID FOR. |I will be at home until 10 a.m. this morning: 650/ 851-2745 | |i have physical therapy in Palo Alto from 11 a.m. to 12:30 p.m.

Went ok. I won't use DunRite again, as I can't trust them to pay attention to the details. Of 3 bids, they were cheapest and they seemed honest and knowledgeable. all seemed to go well but, it wasn't until 9 months later, that "cracks" started to show. Compressors (both units) started leaking oil/coolant. I called and emailed DunRite 6 or more times and never could get a return call from them. Finally I called another Service technician. He came out and found that some caps on both units had not been properly tightened. He also pointed out some improper gas connection and wiring, and a few details the installer (DunRite) could have taken 10 mins to do better. Overall, DunRite did "ok" but, you have to watch them closely. During the house review, before the install, I noticed they were taking no notes about house sizes, number of existing vents, etc and consequently, they almost installed the wrong size compressor in one house. I actually caught it and pointed it out to them. They were very punctual, before and during installation. They were also clean and professional. Installed Payne units, which seem to be working fine.

Description of Work
Two units (duplex). Replace / install new heater and AC in one unit. Dispose of old unit. New AC only in other unit. New Thermostats and wiring.

I don't recall a problem, so everything went well. It wasn't the first time I used them. They installed the furnace and the water heater. I found them on Angie's List offering the deal, so I got it. They installed it in 2012.

Description of Work
DunRite Heating & Air Incorporated did an inspection and maintenance of the furnace.

When I called DunRite Heating & Air Inc, Mike Wood, the owner, gave me a lot of excellent information over the phone about the best quality heaters. Mike is very straightforward. He provides an estimate and sticks to it. He does not try to up sale. Mike came out to the house to look at the old heater to make sure the new heater would be the correct one. It turned out that he could install the new heater the same day. Two of the installers, Jesse and Dilbert, came to install the new heater. They were obviously very knowledgeable and very professional. They finished installing the heater in less time than Mike had estimated. Jesse and Dilbert turned on the new heater and it worked beautifully. Mike also installed a new thermostat to go with the new heater. I will do business again with DunRite Heating & Air whenever I have future heating needs. This is why I love doing business with small businesses and/or family owned businesses. They treat customers with respect and consideration. I highly recommend DunRite Heating & Air!

Description of Work
Installed a brand new heater in my home.

These guys have too much attitude for a business owner. I called and scheduled an appointment with Dunrite for servicing an air conditioning unit. It was a no-show. When I called to follow up, after multiple back and forth calls, they offered to come next day. Then they went on to warn that we will call and if no one answers they would not show up. I tried to provide a landline home number and the guy started mocking me that I don't have a landline at work. That's none of his business. When I said that "You should be apologizing for not showing up for your appointment today" he said he wouldn't serve us and hung up promptly.

When the A/C and the furnace for my 38-yr old unit at my rental condo in Campbell, stopped working, I called a serviceman who found cracks in the combustion chamber of the heater. He condemned the heater and shutoff the gas. He also found the A/C unit still operational after he changed the thermostat. He said he would provide me with a proposal for replacing the heater and also one for replacing both the heater and the air conditioner at the same time. The proposal for replacing the heater came after 10 days, but the one I was really interested in (replacing both units) never came. I followed up with the company twice by email and have had no response yet. So I contacted another A+ rated company on Angie?s List: DunRite Heating and Air Inc. Michael Wood, owner of DunRite, came over the next morning to examine the installation. He was very knowledgeable, articulate and explained the details in an easy-to-understand manner. He suggested replacing the air-intake grille so the filter could be replaced easily from inside the house without having to go to the furnace. He quoted a firm, very reasonable price free of contingencies. The installers, James and Clay, came on time and completed the job the same day. They were polite, orderly and efficient. I am very pleased with DunRite and intend to use their services for my other properties and highly recommend it to others in need of heating/air conditioning services.

Description of Work
Installed replacement heater and AC at my rental condo in Campbell.

pleasant personable lots of talk but little actually done, no cleaning of very dirty fan. no lubricating of any moving parts. lots of discourse re his honesty and longevity. tried to sell his brother's duct cleaning service. definitely NOT WORTH THE MONEY

I received two referrals for AC repair outside of Angie's list. Did a quick search for reviews and saw that Dunrite had a good rating on Angie's List. I called Dunrite on Tuesday morning to see when I could get our unit repaired. I was told that they could get me on the schedule for Wednesday, but due to the volume of calls they had, they could not be sure when they could make it out. I received a call Tuesday evening and was told that they could be at my home in 15 minutes to take a look at my problem. Within an hour of that call, they came out, diagnosed my problem and had my AC back in working order. Very much appreciated the quick response, especially with warm weather on the way.

Description of Work
AC unit stopped functioning and we needed somebody to fix the problem quickly.

The results were a quick success, considering he had reviewed the schematics / diagram of my electric heater prior and made sure all the wires were in the correct spot, some had to be fixed, so the 2nd time when he came on New Years Day he knew exactly what to do to fix it 100%. We had to wait for him to get the part from the mfg. of my heater first, but that was understandable. It all went relatively quickly considering it was the holidays.

Description of Work
First time came out to review & study the problem(s) with my electric heater. Later purchased part required to fix it. Came out on New Years Day to replace new part and fix the problem. He showed me how it all works and was very informative.