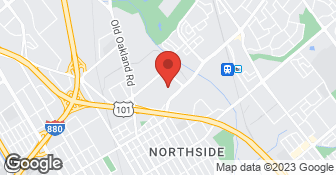 If you’re looking for reliable, quality heating and cooling services in San Jose, contact DG Heating & Air Conditioning. They are an HVAC company whose goal is to provide top-notch customer service each and every time. From heating and cooling repairs and installations to whole-home air filtration, they treat each customer as if they were their only customer. Some other common services they provide include duct installation and removal, ductless mini-split installations, new construction services, and commercial HVAC services. For over 10 years, they have been building long-term relationships with their customers by providing honest and friendly customer service and look forward to helping you with all of your home and business HVAC needs. They are a Better Business Bureau Accredited Business and offer free in-person estimates, senior and veteran discounts, and knowledgeable technicians. Reach out to them today to schedule your next service!...

Frankly I was not impressed with the overall experience. To get an estimate I had to make multiple calls between the office and John (owner). I spoke to John over the phone and explained what I was looking to do and then for him to come by my house to provide a more detailed estimate I had to call back to the office to speak to the manager there who handles John's calendar. Not a big deal as I can understand calendar management. On the day of the estimate though, John arrived (he was on time), but quickly walked through the house, was somewhat dismissive of my questions and then rushed out. He then gave me his card and asked me to email him with what we had talked about and he would reply with estimates. In effect, he took no notes of what the job would entail and then asked me to itemize the discussion and service options. I received his and quot;estimateand quot; 3 days later where he essentially just replied in line with prices for the items I listed in my email. No formal estimate, or proposal... just a few numbers he added in my email to him. So I cannot review D and H based on their work, they may do good work and this is what I learned from other reviews, but I just did not have a good experience or feeling about the estimate process, so I went with another provider.

Pros: Very friendly, and good at explaining how both the air handler and heat pump work together to both heat and cool our house. In spite of delays on the part of the general contractor and other subcontractors, they were prompt and courteous during the installation of the ceiling ductwork, registers and HVAC appliances (air handler in our tiny attic, heat pump outside in backyard). We really liked working with their lead technician Patrick, who was on top of everything onsite. Cons: The owners John and Mike didn't take time to discuss the best make and models of heat pump systems to best suit our house and usage patterns. Indeed, it was a struggle at times to get them to send us the model and serial numbers for the HVAC appliances, but when installation was complete, they finally handed over the manuals that came with the appliances. In addition, we needed to get invoice info for the air handler and heat pump into order to obtain energy rebates and tax credits; this was stipulated in our contract, too. Oddly enough, DG seemed to get cagey when we requested this info, sending only an energy efficiency certificate for the appliances. I guess they might not have wanted to see what they were getting as a subcontractor fee, but such and quot;secrecyand quot; seemed irrelevant to us (we already know that subs would get a portion, that's how they're paid, of course). They finished installation in mid-March 2010, and everything ran smoothly until December of that year. Suddenly, it seemed that the air conditioning (cold air) would start running, when we were expecting heating instead; heating would eventually return, but this seemed worrisome since it was winter. We contacted them, and it took them nearly 2 weeks to respond to us. It turned out to be expected behavior: that during especially cold (sub-freezing) temperatures the heat pump will temporarily pump heat (literally) into itself (thus cooling the house briefly) to warm its coils in order to function efficiently. However, it would've been helpful to have learned this sooner with a prompter response from DG.

Description of Work
DG installed an electrical heat pump based HVAC system in our house, as part of a major remodeling project in our house. We hadn't any sort of centralized heating beforehand.

RA Construction has been a family owned and operated business since 1985. No job is too small or too big for Ron or his team. We take roofs seriously. We price our products fairly and work hard to make sure that our customers get exactly what they order. Owner Ron Andrews makes it a point to visit each jobsite and discuss any questions or concerns with the client. We want to provide the client with a superior roof at a great price. We offer warranty and insurance for all services provided. Our goal is to suggest and install a best of class Roofing System, using superior components available on the market and pay special attention to details and to customers' requests and needs.  …

We started in this industry in 1991 and are a locally owned and operated company that values honesty and integrity and treats your home as if it were our own. We offer a variety of gutter services that are customizable to each individual project. We pride ourselves on the quality of our work as well as our commitment to outstanding results. We look forward to building lasting relationships and guarantee your satisfaction! We offer gutter services (repair, installation, cleaning, and leaf-guard), pressure washing, window cleaning, termite & dry-rot repairs, roofing and more.  …

Are there any services DG Heating & Air Conditioning Inc does not offer?