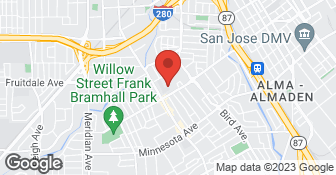 They are very thorough, Aly himself showed up and talked to me and said he got the work done, they finished it in 3 hours they cleaned up well.

Description of Work
Trimming tree that is laying over roof and blocking solar panels. Trim an avocado tree that is overhanging the sidewalk in the yard and touching house.

Aly came on a Thursday to give an estimate and had 2 workers out the next day. They helped remove the trunk of a citrus tree that I couldn't get out myself along with trimming and orange tree and the neighbors trees that were coming over on our side which was encroaching on wires. Both the communication and work done were excellent.

A+ service. Would highly recommend 😊

Solid work and great look. A lot of overgrowth and debris. Awesome work to still keep shade but provide a cleaner and neat look. Totally hauled out very thing away since so much so I am not left with a big curb pile.

I have used Aly's Tree Service for 20 years. They've removed dead trees and planted new trees and trimmed trees. Usually Aly is there during the service and things go great. Usually I give straight A's. This time I asked for pruning and trimming of citrus trees. Aly came for the estimate. He said my orange tree was fine for another year--I always appreciate his honesty. The lemon tree and the lime tree needed some work. They had gotten too large and dense. Workers came out promptly. No need for Aly for this smaller job. After 30 minutes (and $400) they said they were finished. I looked at the trees and they were densely shaped shrubs on a trunk. Now, I know I asked for thinning/pruning. I told them so but they said this is how they always do it and how Aly told them to do it. I wasn't thrilled with this as my gardener will do this same work for no added fee. I told them sun and air needed to get into there and thinning branches was needed for healthy fruit. They either didn't understand me or acted like they didn't understand me as I tried to explain what I wanted. Rather than continue to disagree, I let them go. I called Aly's number and he came right over and looked at it and said he'd send a crew right over to fix it and they did first thing in the morning. I loved that response. The second job done was excellent and exactly what I had in mind. I'm not sure what was going on with the first crew. Did they want to quickly get the job done and not do all the work? Did they really not know what pruning a tree involves? Do some people really like super dense shrub citrus trees? I really trust Aly, but was disappointed in the work his first crew did. I will continue to use Aly and continue to make sure the job is done the way I need it even if I have to call them again to fix it up.

Description of Work
Trimming and pruning of lemon and lime trees.

Aly's team did a fantastic job. They pulled weeds, cleaned up pathways, pruned our shrubs and trees. I got a real chance to look at there job, 3-4 weeks after they did it and realize that not only did they do what I needed, but the job they did on trimming our trees is the best job we've had in years. Definitely want them back.

Description of Work
Backyard clean up

Called for an appointment on Friday. The receptionist set up an appointment for Aly to come and give an estimate on tree trimming service the coming Sunday morning between 10-12 pm. No show on Sunday. I called after waiting for him for 2 hours on Sunday, and was told that he has other plans and decided not to show up after all. There was no communication at all from the company for the change in a scheduled appointment, and wasted my Sunday morning waiting for a no show.

While he was quick to come and give me a quote, once I called to schedule the service, it was like I had to track him down for me to give him my business. I left a message saying I wanted to schedule to service, but a day later I had to call and find out what was up. When I talked with him, it sounded like he was in a room full of children and really wasn't concentrating or focused on the business I wanted to give him. He verbally agreed to doing the job the next day. He asked that I sign the contract, put the date of service on there and email it back to him, which I did within a half a hour. I even got an email back from them saying that they had received the contract and would print it out and put it on his desk. So here it is the next day, and no word from them about what time they would come by. So I call and he says it's not on the schedule and he doesn't have a copy of it on his desk. He has a process and the contract is not on his desk. He has a lot to keep track of and to me he doesn't do a very good job of keeping track of things. He said he sort of remembers the conversation from yesterday, so why didn't he follow up about it. With 2 different phone numbers to call I think information gets lost and you the customer gets lost. I would NOT recommend them.

Description of Work
I called based on his high recommendations for tree service for him to clean up 3 palm trees.

They were a little late, but they were fast and professional.

Description of Work
I had some large plants removed from the front of my house.

Very good, they were excellent. They did a very good job.

Description of Work
Well they trimmed a bunch of trees. There was about eight.