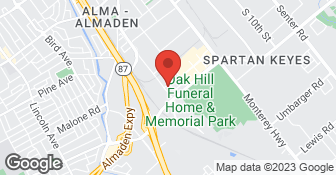 Adam had made an appointment to take a look and give us an estimate but then he came earlier and took a look and gave us an estimate of $100/month if it had 4 visits. We didn't know when he came the first time, but then he came again on the appointed date and told us it would be $125 instead. But I was a little disappointed so he accepted to do it @$100 itself. He told it included mowing, trimming, spraying medicine for small regular problems in the plant, blowing, planting. The first time he came he did the regular stuff and he had promised me that he would do planting but then he said he didn't have time and went away. The second time he came he did the regular work and sprayed medicine and also did planting of my vegetables. I was leaving out so I just showed him the places where I wanted each of them and left. When I came back to see how he has done I was very upset because he had not spaced them apart and just planted all together. When I called him he got upset and didn't come.

Description of Work
Regular lawn and garden maintenance. He did some planting of the vegetables and I was shocked to see that a gardner is so bad that he does not know that vegetables should be planted with spacing apart and blamed that I did not give instructions.

Given Adam's ''Angie's List'' record and his close proximity to my house I called Adam and made an appointment with him to come and look over the job and give me a estimate. I told Adam to call before he came which he did. He showed up on time and we walked the job. He gave me an estimate that I thought was reasonable and we set a date and time to do the work. Again, Adam showed up on time and proceeded to do the work. He spent the entire day on the job and did not bother me much for direction. The biggest part of the job was getting rid of the trimming debris. As I have very little frontage on the street and my garbage pickup day was two days later. Adam volunteered to haul the debris away even though this was not part of our agreement. Adam is very professional and courteous. I highly recommend him for the services he provides. This guy is so good that even he must know how good he is.

This was a very good experience in that all the work was done for a good price. He also said if I want other things taken care of such as fences, garden prep, tree planting, or regular lawn maintenance, he could do that too. He takes the time to listen and get it right when you are discussing the job.

Description of Work
I needed a major clean-up on my property; weeding, mowing, weed-whipping, trees and shrubs removed, junk and old wood removed. Adam did all this in a very quick and efficient manner, and also sprayed an herbicide I asked for on the sidewalks, pathways and driveway areas.

We specialize in JUNK REMOVAL/ DUMP runs. We have a 6x10 dump trailer w/ 4' walls. we also have a 16' flat trailer. For an immediate response call Marcus (Owner) @ 831-297-1972 We REMOVE JUNK CARS with or without a title. If its in your way and u want your personal space back we can GET IT DONE!! TOWING--5TH WHEEL TRAILER TRANSPORT--OLD 5TH WHEEL REMOVAL. METAL REMOVAL-EQUIPTMENT HAULING- call or message for free estimates! Great customer service! We aim to please!  …

The Junkluggers of San Jose is a sustainability-driven junk removal company committed to the environment and the communities we serve. We do things differently compared to our competitors. With our green guarantee, we donate first, recycle second. We guarantee the price you pay will never be higher than the estimate we quoted. Sometimes, you'll even pay less! We know the importance of reducing waste, so we made our goal to keep all junk out of landfills by 2025! When we take away your unwanted items we go to local charities (HOPE, Habitat, Goodwill, and more) around San Jose, Santa Clara, and nearby. Since the items donated were yours once upon a time, we will send you a tax-deductible receipt for helping out your own community! If your items can't be donated, no worries! We recycle unwanted items as much as possible to ensure that your environment is protected at all times. We serve Sunnyvale, Mountain View, Santa Clara, Palo Alto, Stanford, Cupertino, San Jose, Milpitas, and the surrounding area.  …

All statements concerning insurance, licenses, and bonds are informational only, and are self-reported. Since insurance, licenses and bonds can expire and can be cancelled, homeowners should always check such information for themselves.To find more licensing information for your state, visit our Find Licensing Requirements page.
General Information
Free Estimates
Yes
Eco-Friendly Accreditations
No
Payment Options
Check
Senior Discount
ASK FOR DETAILS
Emergency Service
Yes
Warranties
100% SATISFACTION

ADAM'S LAWN CARE is currently rated 3.7 overall out of 5.

No, ADAM'S LAWN CARE does not offer eco-friendly accreditations.

No, ADAM'S LAWN CARE does not offer a senior discount.

No, ADAM'S LAWN CARE does not offer warranties.