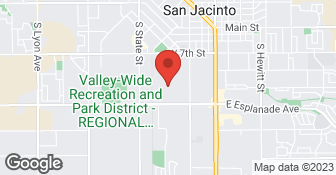 ACP was contracted under my home warranty to troubleshoot my garbage disposal's failure to grind material. Appointment time was within 24 hours and they were willing to work with my schedule. Technician arrived on time, was obviously knowledgable, and quickly diagnosed the problem which resulted in the disposal needing to be replaced. He called the warranty company immediately, got their approval for the replacement, and scheduled the follow on appointment for the next day in order to give him time to get the new disposal. I asked about upgrading and covering the cost difference. Technician called APC corporate office and got approvalto do so and offered a very reasonable price. The following day the technican arrived on time and effected the replacement in less than 30 minutes. There was only one hickup. The original disposal was hard wired to the circuit and the new one was wired to plug into an outlet. Due to my time constraints, I asked the technican to leave the electrical hook up alone. The technician indicated that he was willing to do the work but I did not have the time. He agreeded to leave the electical connection alone and stated that if there were any problems to contact APC and they would come back out at no charge. A few days later, I installed a new GFI outlet and plugged in the disposal. It worked like a champ. No leaks. The technician was courteous, knowledgeable, and engaging. ACP is a class act company and who I will call for all my plumbing issues.

Flood 1 Restoration is a locally owned and operated water, fire, and mold damage restoration company servicing Riverside County, and San Diego County's North Country for more than 25 years. Since opening in 1997, Flood 1 Restoration has encountered almost every situation imaginable when it comes to water, mold, and fire damage. We understand water damage doesn't wait until it's convenient and our technicians are available 24/7 to respond to your call. From fixing the initial source of the leak to water removal, dry-out , contents restoration, odor removal and mold remediation we can handle any size water or fire emergency that comes our way.  …

Give us call or click to request a quote. Thank you.  …

AMERICAN CLASSIC PLUMBING is currently rated 5 overall out of 5.

No, AMERICAN CLASSIC PLUMBING does not offer a senior discount.