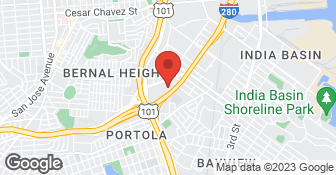 Aaron Gordon Construction (AGC) provides high-end residential remodel services. We work with clients who are passionate about their homes and are looking for superb craftsmanship. Our top priorities are providing an open channel of communication with our clients, and doing the highest quality job possible. ...

Award Winning Construction company- Angie's List Super Service Awards 4 years straight A+ rating with the BBB And more! Complete Home Remodeling Company. If you are looking for bathroom remodeling, kitchen remodeling, room additions, and general construction, we are here to help! Everlast Construction has an extensive portfolio of successful remodeling projects in the East Bay and San Francisco. Call our Award-Wining Team for an expert Complimentary Estimate today!  …

We worked with Aaron and a crew of 3 initially, during the 2 years on the project Aaron's crew grew and his team evolved with additional workers and a foreman Joro. Much of the work was initially supervised by Aaron, and Joro, along with a great staff that helped move work along. Angel (demo), Jeff (Cabinets), Tomas (Tile), Saul (Plumber), Painter, and others. They all came in did their work with ...

Description of Work
Aaron Gordon Construction Company worked on two phases of our home remodel. Initially we had him give estimates to compare with other contractors, and do work on a small bathroom remodel including electrical and structural work including reframing and residing of the exterior. We than due to finances put the second kitchen remodel phase on hold. We continued with them on the kitchen remodel work including the installation of an IKEA kitchen system and appliances. The work was completed with great sensitivity to our needs as home owners, and timing of the work in relation to permits and our purchasing of the kitchen system and appliances. Aaron Gordon worked with us on pricing, was fair on the change orders, and worked with us consistently on the details and our own owner "sweat-equity" on parts of the project. His crew was always friendly and polite, worked h****** all parts of the project and were a good group of sub-contractors, foreman and crew.

Thank you for the kind words Customer. This was a long project with the 2 phases from start to finish, and you saw us grow from a small company of 2 to a company of 17 today. Your input is greatly appreciated and yes, we are much more thorough with the plans now, then when I was wearing the hat of business owner, carpenter, foreman, project manager, and salesman. I hope you enjoy your new kitchen ...
5.0

Everything written about Aaron, his crew and his company, are true. My husband and I were very nervous as this was a big project for us and after talking with Aaron, we were immediately put at ease. He walked us through everything we would need from a-z and was very professional. He and his crew know their stuff and their work was spectacular. They were prompt, efficient and the quality was way be...

Description of Work
For those of you that are just looking for a quick rating on a general contractor and do not want to read on further about the detailed reasons of “why”, here it is, Aaron Gordon Construction in my opinion, is a 5 star General Contractor that has done beautiful work on not only my home but also my parents’ home. If you would like to know more information than that, continue to read on. I first met Aaron and his crew at Aaron Gordon Construction a little over a year ago when my parents contracted him out to work on their old Victorian Home in Noe Valley. Their home needed a major face lift as the bathrooms and master kitchen were extremely outdated. My mother had always hated their kitchen and master bathroom and finally after all of these years and a $150,000 contract later, she convinced my father to remodel the kitchen, master bath and downstairs bath. A victory in itself if you know my father. My only thought was, the poor general contractor that has to deal with my father has no idea what they are getting themselves into. My dad is a perfectionist and I can’t tell you how many times I heard growing up, “If you’re not going to do something right the first time, don’t bother doing it at all”. They would have several general contractors come and place bids on the house but my father was extremely impressed with not only the knowledge Aaron brought to the table but also the manner in which he presented himself. My father is a no nonsense kind of man and tells it like it is just the way Aaron is. My father hates “fluff”, as he calls it, and Aaron is straight forward and as honest as they come. If you come to meet him, you’ll know what I mean. While Aaron was working on my parents’ house, my husband and I saw the sort of work that was being accomplished and started talking about doing a remodel on our home. We knew we had dry rot damage in our master bathroom, although at the time we had no idea just how bad it really was and we wanted to update our kitchen. So one day while at my parents’ house, Aaron was doing a final walk through with my parents, their house came out beautiful by the way, and I got to talking with Aaron about our dry rot problem and a possible master bath remodel. Aaron and one of his foreman, Chad, came over to look at my master bath and test the walls to find out the extent of the dry rot damage. As I said, it was allot worse than my husband and I had thought. The dry rot actually extended from the master bathroom wall to the master bedroom wall. The sheet rock walls were going to have to be taken out and new walls put up. At that point we started thinking, well if the walls have to come down, can we extend the Master bathroom a few more feet into the master bedroom (largest room in the house) to make room for a two person shower, separate tub, his and her sinks as well as new stone tile floors. My dream bathroom as my husband likes to call it. We also wanted to update our kitchen as we wanted an island installed, modern cabinets and new countertops to match the island counter tops. All in all, it came to about $100,000 and my husband and I absolutely love it!

Thanks Customer, Your kind words are much appreciated. See you on the next one!
5.0

This doubled the size of our home.We bought this house with the intent of doing this work eventually. The biggest challenge was actually getting a general contractor that was going to be have access to all the right subcontractors, knew how to work with designers/architects, and could take the project from inception to completion. We knew it was going to be a huge undertaking and would probably ha...

Description of Work
We contacted Aaron Gordon Construction to build an addition on to the back of our home including a third bedroom and second bathroom in our garage/basement area, and a new deck.

Thanks Customer, Yes, construction projects can be hard on a family. But in the long run I think well worth it. I hope the new addition is treating you well. Sincerely, Aaron
5.0

Aaron Gordon Construction just completed a major remodel for us, and the entire process from start-to-finish far exceeded our expectations. Aaron and his crew (including his sub-contractors) all maintained a high-level of professionalism, punctuality, and cleanliness throughout the scope of our project. Their attention to detail is a testament to the passion they bring to the job, no matter how bi...

Thank you Customer for the great review. This was a fun project for us and we really enjoyed getting to know you. Enjoy your new house! Sincerely, Aaron
5.0

All along the way Aaron was proactive noticing things before they became problems. For instance we replaced a portion of fence on top of on an existing retaining wall. We were not planning on replacing that section of the retaining wall too but after looking at the concrete they saw that it was not strong enough to hold the new fence bolts and re-poured that section too. Since they noticed it righ...

Description of Work
We now love our backyard! Aaron and his crew put in a new fence, retaining walls, planter boxes and a patio/deck over cracked concrete.

Thank you Customer, My guys enjoyed playing with the kids while on the job. Aaron
5.0

Aaron and his team finished both projects for me on time. His work exceeded my expectations in terms of quality and value. Also, and very importantly, I felt comfortable with the construction crew having full access to my home. They were exceedingly careful with furniture and flooring while also cleaning thoroughly at the end of each workday.On the larger of two projects, Aaron worked closely with an architect who has gone on to team up with Aaron on other projects unrelated to my home. This is also a huge vote of confidence by an objective professional.

Description of Work
Two projects: the first was to remove a set of doors and windows on a large wall and replace those with higher quality and more open glasswork to improve my SF views. The second was to fix my chimney.

The project went according to our time table. The workmen were always on time, efficient, polite and very mindful of keeping the house clean and tidy. The sub-contractors he hired also had the same work ethics that Aaron has, they were as professional, accommodating,and reliable as everyone who work for AGC. I plan on adding on two decks and a patio to the back of my house and without hesitation I will use Aaron Gordon Construction.

Description of Work
Aaron Gordon came to meet my husband and myself to give us an estimate on work to be done. He helped us clarify our ideas and suggested other ideas to consider. I called him back two days later and he returned my call promptly. He remodeled my kitchen: new appliances, counters, flooring, cabinets,new windows and sliding glass doors. Then we went on to remodel three bathrooms: new tiling, tub, shower, cabinets, mirrors also, we removed walls in the living room and dining room: new flooring,wall paper