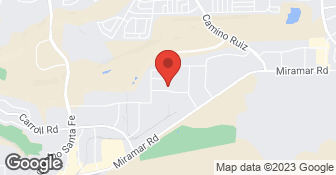 San Diego's finest professional handyman service. General Contractor license #807495. Our Service Technicians are background-checked employees with over 15 years experience each. We regularly do drywall repair, carpentry, plumbing, electrical, tiling, assembly and much more. We offer real appointments. Busy schedules can make repairs and maintenance hard to get to. Is your "To Do" list overwhelming and unmanageable? One call to Mr. Handyman solves all your home repair headaches. "On Time/ Done Right"....

Could not have been better

Great, punctual service for my tenants. The faucet did start leaking after 2-3 months. Mr Handyman sent someone out the day I notified them and they repaired without charge.

The job was performed satisfactorily and representative was punctual and courteous

Travis arrived exactly on time and got right to work. He had all the tools and equipment he needed. He completed the work within about 15 minutes of his estimate and it was all done very professionally including the clean-up (I think the kitchen was cleaner after he left than it was when he arrived). He took the time to show me how the plumbing was routed and where all the connections were for future reference. I'm not sure how I could ask for a better experience and I wouldn't hesitate to work with Mr. Handyman of Northern San Diego in the future.

Description of Work
Plumbing water line through cabinetry to refrigerator for water/ice dispenser and installation of damper for range hood.

Amazing. Mr. Handyman (Travis) showed up on time, was super professional, explained everything he was doing and did amazing work. Strongly recommended.

Description of Work
Our exhaust fan was extremely loud in our master bath, so we never ran it and of course mold started growing and the paint started peeling. Looking at the ceiling it was a mess. I didn't know where to start. Also we had some plumbing issues in the guest shower and sink, wasn't sure what the problem was. Oh and the cabinets needed a fresh coat of paint. We needed a handyman.

AWESOME! We'd been struggling for years to get a fence company to repair the front of our fence. The entire front of our wooden privacy fence was starting to fall down due to decaying wood, swelling, and screws and nails coming out. I guess the job was too small for them, because they never returned to do the work after providing a quote. But Mr. Handyman did it for less than their quotes (3 different fence companies)! The handyman dug out the old concrete post foundation, poured new concrete, measured and cut wood planking to fit. He asked me what quality of wood I wanted, and gave very accurate estimates of what each would cost (I checked in a hardware store later). He didn't rush the job, and yet didn't waste time. My neighbors all complimented me on the work done, and asked for a referral (our neighborhood was all fenced at the same time and we all needed work done, and had all struggled to find someone willing and able to do a quality job). Mr. Handyman did a fantastic job. Our tech was Adam (don't know his last name), and the job took more than a day because the concrete needed to set, but he returned when he said he would and the job couldn't have gone better. When I first made the appointment, it was only for the bathroom faucet and under-sink pipe leakage in the kitchen, but I'd had a coupon for some number of hours, and that work was completed so quickly that I asked if he could take a look at the fence. So I was extremely pleased to end up with far more than what I'd originally hoped for. And here it is a year later, and the fence is still awesome! I'm about to call them again to install a porch light for me because I was so pleased with the service last year, I have no reason to call anyone else!

As a licensed, bonded and insured company for almost 40 years, our professional team brings expertise and detail to every job to provide the best experience possible. Our family owned company was founded in California and has expanded to serve the Oregon and Washington areas in recent years. With Sure Guard, you’re not only purchasing a valuable partner, but an unmatched experience; we “roll out the red carpet” for our customers and treat every customer as a valued person and not a just a number as many other large companies would. We look at every project as an opportunity to innovate solutions before problems exist and bid every job with that in mind. Sure Guard was family founded and continues as a company focused on delivering the best value without compromising on innovative installation techniques and sustainable, high quality products. Every job we do comes backed with our “Sure Shield” warranty that allows our customers to have piece of mind that when we’re complete, it’s done the best way. Sure Guard is a member of the Better Business Bureau and HBA, as well as a dealer of Milgard windows and doors, and partner with James Hardie building products, Certainteed, GAF and Owens Corning roofing just to name a few.  …