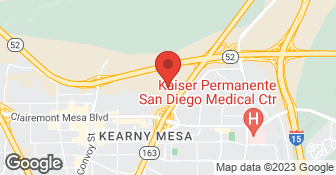 We are taking all necessary precautions against COVID-19.

TERMITES ONLY! Avoid fumigation with a more natural termite treatment. Our one-day methods are eco-friendly and pet safe. They not only eliminate termites, but prevent future infestations. At Hi-Tech Termite Control, we specialize in termite control using the latest advanced technology. These require no tenting, packing, or moving out! We use plant- and salt-based products such as orange oil along with our state-registered Exterminator 4.0 Microwave system. These allow us to offer an industry-leading three year warranty. We also offer fumigation when necessary. And we will continue to stand by our service with our unbeatable warranty! Our inspectors will be happy to provide you with a free estimate. Call us today!...

Very well. Always on-time and in communication. Price was a bit steep but performance warrants it.

I wholeheartedly recommend this company. They were straightforward, honest, hard-working, conscientious, and above all effective. They worked tirelessly to solve our pest problem, and were completely responsive and helpful whenever we called or texted with questions. If we ever have another termite problem, I would call this company without hesitation. So should you!

I did not want a vendor who tented and injected chemicals for treatment. Inspection went very well and thorough. Was able to schedule treatment within 10 days. Treatment consisted of injection of special chemicals into areas where dry termites were identified. Some termites identified in bedroom wall were treated with high power microwaves. Three year warranty. Technician was respectful, well dressed for the work and careful in his work. Completed the work on schedule.

Description of Work
Dry termite damage was found in my veranda and porch wood ceiling, and some in the bedroom wall. Vendor provided free inspection and proposal, which I requested.

The service technicians were on time and very courteous. They performed the service as agreed upon and everything went very smooth. I’m pleased with their professionalism and work.

Description of Work
We needed to have the house inspected for termites since we saw signs of infestation. Jeff was prompt, very knowledgeable and answered all my questions. Didn’t pressure me to buy any service or scare me into giving him any business. I thought for sure we had termite damage in our patio and Jeff could’ve told me we did and I wouldn’t have argued but he didn’t and I was comforted that he didn’t take advantage of me. He even recommended I get other inspections and quotes done.

They seem to have done an excellent job.

The inspector was prompt, professional and thorough. He agreed that localized treatment of the area would be appropriate. However, he insisted on inspecting the whole house and declared evidence of termites in the attic requiring a full house treatment. We asked for evidence and he brought down a piece of insulation with a single tiny insect wing. However, he noted that the treatment was preventative as well as remediative. Since we had seen numerous tented houses in the neighborhood over the years, we agreed. On further discussion though, he said at our minimal level of infestation that spraying would be just as effective as tenting, be cheaper, faster and convey the same warranty. Again we agreed and he scheduled the work for the following week. It seemed to go well with two exceptions. First, the subterranean probe damaged an irrigation line that blew out 3 days later and required a $200 repair visit. Annoying, but accidents do happen. Second, in spite of his glowing description of the spray treatment, the work completed report noted it as a "secondary and substandard measure under Section 1992 of the Structural Pest Control Board." This effectively renders the treatment worthless if you plan on selling the house and should have been disclosed VERY clearly up front.

Description of Work
A localized termite infestation of a balcony support post needed to be addressed.

Ray was well equipped and professional, completing a very comprehensive inspection of our home including the attic, the entire outside of the building and underneath the house. He explained what his was doing and answered all my questions. His conclusion was "no termites." He found a few areas of dry rot and showed me where they were. His report arrived in just a few days. The inspection took about 1 1/2 hours and he was never in a hurry. There was no charge for the inspection. I was so impressed with his work and his company, I wanted to compensate them. He said no, this inspection is free but it would help him and his company by writing this review! I was happy to do this.

Description of Work
I contacted Hi-Tech Termite Control because after reading their web site where I learned there are effective termite treatment options other than tenting. Another provider, our monthly terminator, recommended tenting. I wanted to find out if there was an alternative. I heard about Hi-Tech from an NPR ad. It was easy to set up an appointment for an inspection with Hi-Tech. Ray Wurm, one of their licensed inspectors. came to my home a few minutes late but he had called and told me he might be late due to traffic!.

I was impressed, and he was nice. I am just waiting on the estimate.

Description of Work
I had an inspection done.

Steve from Hi-Tech Termite Control (San Diego) completed a thorough inspection of my 2-story house and emailed an estimate a few days later. I accepted the estimate. I had termite damage in several location in the upper eaves, attic, and frame areas. Chemicals were injected to eliminate the termites and microwave was used in some areas. Mike completed the job within half of a day.

Jeff did a thorough inspection and explained everything related in great detail. We liked their pricing, product, and they seem to have more options to choose from for treatment than other companies we checked on. The guys were proficient did a very thorough and professional termite treatment throughout the whole exterior of the house, grounds, and the interior of the garage and attic. They also treated behind the bathroom vanity mirror and where termites had created a hole in our dining room ceiling. They also used some patented microwave technology in some areas. We are very happy with their work and recommend them to our neighbors.

We do not offer other forms of pest control.

HI-TECH TERMITE CONTROL INC is currently rated 4.9 overall out of 5.

Are there any services HI-TECH TERMITE CONTROL INC does not offer?

We do not offer other forms of pest control.