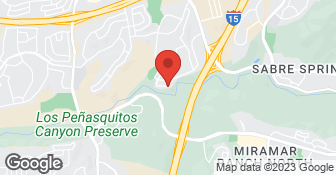 Owner ran company, with the owner on all jobsites. Most work is done in house. We specialize in roofing and solar. The roof is the most important part of a solar installation. We offer other energy efficient products. financing , Hero, Ygrene, Calfirst...

Do not use this company. We got stuck with this contractor because the former owner of our home used him to get a 2-Year Roof Certification. Turns out, the certification is worth the paper it's printed on. When we first called him, he hung up on us. In his defense, it was a Sunday and we thought we were calling an office number because this is the number he provides on his letterhead and on his website. That being said, when he answered the phone, we said, "Oh, we're so sorry to bother you on a Sunday. We were hoping to leave a message." Instead of replying in some reasonable manner, he literally hung up the phone. Great start. Next, we tried him via email. He replied with, "call me". (Punctuation mine because apparently a single tap is too much effort.) So then we called again on a weekday. To say he was gruff would be a compliment. He bullied us into agreeing to let him come by at 6:45am on *either* of the following *two days*!! We should have said no but when you have a leak, you make yourself available to have it looked at. (Also, he berated my spouse, "It's not THAT early.") 6:45am came and went on *both* the days he said he'd come by. I called him at 7:15am on the second day. Again, he could not have been more unpleasant to speak with. When I asked if he was still planning on stopping by, he said, "Yeah, around noon." I very politely said, "Oh, I thought you were aiming for 6:45am." He said, "Things change." This is when I started to do some research. (Normally, I would've done research long beforehand but, again, this is who the previous owner stuck us with.) He is not BBB accredited (not surprising); has a single terrible review on Yelp! (looking worse); and then when I dig a little deeper on BBB's website, found three complaints against him. The complaints are even the most troubling part. His *responses* to the complaints are crazy. You can (and should) read them here: http://www.bbb.org/sdoc/business-reviews/contractor-general-green-builder/gene-mccormick-construction-in-san-diego-ca-16005154/complaints#breakdown So when he called me fifteen minutes prior to my re-rescheduled appointment and said, "What's the rest of your week look like?" I was not surprised. I simply said, "You know, don't worry about it. We'll get someone else to look at it." He was *so quick* to say, "Great. Alrighty then," in the cheeriest voice - which was heretofore nonexistent - that I immediately knew he never intended on honoring the certification he provided - ever. Again, if my post doesn't convince you, or the below post doesn't convince you, read the BBB complaints, specifically his responses. It'll make your decision very easy.

Description of Work
Provided a 2-Year Roof Certification that is apparently worth the paper it's written on.

We do honor our warranties. Next I never hung up on them. I did try to get over and help them but all of the time they offer did not work with my schedule We were working in a different area at that point in time and had a roof open so I was obligated to getting that roof water tight. Now as for missing appointments, If I say I will try to get by either at this time or at another time it means that I will try. [Member Name Removed] got some of the information through here husband, third party, though which might have added to the misunderstanding. If these people want their roof fixed they may have tried to be a little more understanding, I called any time I could not make it I was trying very hard to come at a time when they were hard, when I call to reschedule the only appointment that I actually made and let her know I was going to be an hour late, she said don't bother and hung up, So I was un able to honor the warranty not because I do not honor warranties but that she would not wait an hour. I would like to also point out that this was a repair not a roof we actually did.

Ocean Flooring & Construction is your best source for hardwood floors. Serving San Diego for over 10 years now, we specialize in providing the best service for your flooring needs. We specialize in hardwood installation, sanding and finishing, and wholesale prices for all hardwood flooring. 100% Warranty Guarantees You The Best Service Hardwood installation is one of our specialties, that is why we are confident in giving you a 100% warranty on our installation. You have no need to worry about any mistakes or shortcuts being done when it comes time to install your hardwood floors. Free In-Home Estimate. We want you to be confident when you choose a company to purchase or install your hardwood flooring. That is why you get a free in-home estimate when you call today.  …

We are a full service kitchen & bathroom interior remoding company in San Diego, CA. a small team of eight highly skilled and friendly professionals ready to exceed your expectations.  …

Specializing in solar pv and roofing commercial and residential. We also offer other energy efficient products.

Gene McCormick Construction is currently rated 1 overall out of 5.

No, Gene McCormick Construction does not offer free project estimates.

No, Gene McCormick Construction does not offer warranties.