We accept remote payment
All statements concerning COVID‑19 business operations and essential services are informational only, and are self‑reported and not verified by Angi. 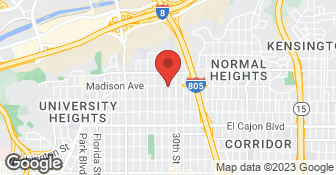 Could not have gone better, honest, timely, professional, easy, trustworthy, a pleasure to work with

I have a new Bosch stacked washer that recently ran out of warranty, and it had been making loud and odd noises since purchased, increasing in loudness as time progressed. I knew it was a unique situation and it would take a technician with some patient investigational skills to navigate this situation. Noah was awesome right from the get go! He was specific in his communication of his experience and his knowledge of Bosch appliances, so we both did not feel like we were wasting each other's time. Turned out it was an installation issue, which Noah described in clear detail what may have gone wrong. Tinkered around and alas I have a washing machine that sounds better and works better than when I first received it. The price was extremely reasonable, I strongly recommend Ecofix for appliance repair. Thanks Noah!

This gentleman spent a lot of time diagnosing a complex dishwasher problem. Thorough, reliable and honest. Will use again.

I’ve got one word. Integrity. I called Jack to try and schedule a repair for my electric range. I explained what the issue was and Jack informed me it was a very common problem, he mentioned he was busy and wanted me to call back in 20 minutes. If I’m being honest I was not going to call back. A couple of hours passed and Jack returned my call and the first thing he asked was “are you a do it yourself” type of person? I responded yes. Jack then proceeded to explain step-by-step what I needed to do to get my range up and running. I was blown away. He didn’t take advantage of my lack of knowledge on the subject, he instead provided helpful advice. I now know that Jack is really in it to help his customers instead of taking advantage of them. In today’s world, that is very rare. I will be saving Jack’s number and recommending him to anyone in need of help.

Jack did an excellent job of diagnosing the problem and repairing the dishwasher.

Very positive experience. He was able to get to us the same day (on a Saturday), including picking up the required part. Very reasonable charge and work professionally done.

I contacted Jack to fix a 20-year old (but lightly used) Kenmore washing machine that had stopped draining water. He started around 2:20 p.m.by checking the drain hose to see if it was clogged. After determining that this was not the case, he removed the old water pump and suggested that it might need to be replaced. He got a new pump from a store in downtown and returned around 7:30 p.m. after a break to continue. As it turned out, replacing the pump did not solve the problem either. He then removed the new pump and kept probing until he found a “diverter valve” in the very back of the machine which was not working. Since the part was no longer available (discontinued), he tried hard to reach it and manually reposition it as a temporary fix. After at least 2-3 hours of hard work in a tight space, he told us that he would charge us the diagnostic fee only, because he didn’t repair the machine. Eventually, we decided to place an order for a new machine. However, we were very much impressed by his sense of professional pride (and humor) as well as his honesty and persistence to fix the problem. These are attributes that are becoming increasingly scarce in the repair business.

Description of Work
Fix a washing machine the did not drain.

awesome he even did extra work for no charge

Jack was very knowledgeable, professional and congenial. He troubleshot the issue with patience and expertise. He went downtown to secure a small fuse needed fo the repair. Additionally he was pleasant and friendly while practicing safety with a face mask. Pricing was very fair and equitable and I feel he did all possible to avoid unnecessary costs. The whole experience was reminiscent of a bygone era when you knew your repairman personally. I highly recommend his services.

Jack came out and did a complete check of the refrigerator/ice maker. We had recently had the ice maker replaced 2 months before then it stopped working and the first repair company wouldn’t respond. Jack diagnosed and fixed the problem without having to replace 60 day warranty. 6 weeks later, stopped working again. Jack came Back out (after hours at that) to find the line had frozen. Cleared it out with no additional charge. Will definitely use him again!

Very well, Technician arrived on time on both occasions, diagnosed the problem. He replaced the dryer part immediately so unit was working as he left. He ordered the refrigerator part for overnight delivery, so installed it the following day.

Great response, fair price. Repairman knew what he was doing!

Great, Carlos took his time to do it right. They were responsible in price and would use again.

Description of Work
Repair, clean and tune up

Eco Fix phoned to say he'd be a bit late-- plus. Carlos was friendly, professional, and thorough-- plus. Carlos diagnosed unknown issues and stayed until he was satisfied he'd fixed our fridge-- plus. Carlos explained the bill and warranty-- plus. Eco Fix--👍👍

The technician was friendly and professional and took care of fixing the dryer with no problem.

Excellent. Jack quickly responded to my service call request. He was able to get the necessary repair part and install it in the same day I called. The washers tight fit location presented a bit of a challenge which Jack handled with grace. His work was top notch and I will definitely call him again for repair services in my home,

Jack Pierce is the owner of Greenleaf (also known as EcoFix 210-409-1530) and provided superior service worthy of an A+. His attention was prompt, and the charge was reasonable. He will certainly be the one I call for all future appliance repairs.

Description of Work
Repair of refrigerator to correct ice building up in back so that a fan was striking the ice and making a loud noise.

I dont think he was from a real company.he didn't have a company car.he wanted me to pay $75 dollars before the work was even done.he said he would return in 1 or 2 hrs with part and didn't. I had to call him After that I decided to go with someone else Everything about Jack seemed fishy.

Customer Non Payment. The service call, disassembly, diagnostic, and cleaning was performed, an estimate was given, and the customer approved the estimate. The customer seemed uneasy with the service call fee, which applies forward to the repair, so I waived it and did NOT collect any fee or deposit before leaving to get the parts. While stuck in traffic on my way back, the customer called to cancel the repair and then the call disconnected. I called her back but she did not answer. I never received any payment whatsoever from this customer.
5.0

Jack is fantastic!!! He fixed my dryer and explained all the things that had to be done step by step. My dryer was 8 years old and had some issues but he took care of it all. The work was done on a Saturday and I was very happy with the price. I will never use anybody but Jack again. I will recommend Jack to everyone I know. He is absolutely the best.

Jack provided A+ service and great pricing. I highly recommend.

We dedicate ourselves each day to providing the highest quality duct cleaning, mold removal and dryer vent cleaning care to our customers. Winner of the 2016 Super Service Award! We have also sought to give our new customers the highest confidence about our ethical business behavior. At SD Air Quality we offer unmatched customer service, the latest technologies, competitive pricing and top quality, support and solutions. Whether you have a small or large, business or home, we have the capabilities to clean all the mess. Our specialty is customer satisfaction and trust as well. SD Air Quality is your #1 choice for any type of cleaning and much more!  …

We are committed to excellence in every aspect of our business. We uphold a standard of integrity bound by fairness, honesty and personal responsibility. Our distinction is the quality of service we bring to our customers. Accurate knowledge of our trade combined with ability is what makes us true professionals. Above all, we are watchful of our customers interests, and make their concerns the basis of our business. Call today for all your dryer vent and air duct cleaning needs!  …

Sky Clean Air is a family owned and operated residential and commercial indoor air quality services specializing in Air Conditioning and Heating services, Air Duct Cleaning and Dryer Vent Cleaning. Our goal is providing the most professional service possible, our team of licensed and experienced technicians use the most advanced equipment to get the best results in every service we provide. Call us for a free in-home estimate today!  …

How is Eco Fix overall rated?

Eco Fix is currently rated 5 overall out of 5.

What days are Eco Fix open?

No, Eco Fix does not offer free project estimates.

No, Eco Fix does not offer eco-friendly accreditations.

Are warranties offered by Eco Fix?

What services does Eco Fix offer?