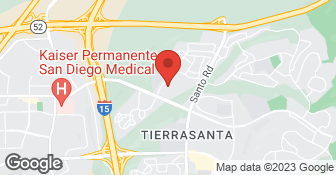 You want your carpets to look brand new. And a thorough clean is important to your family’s health. You don’t want your carpets to be drenched in water, as the combination of moisture and central heating can cause life threatening mold growth beneath your carpets. And you don’t want a basic surface clean, as that will leave a sticky residue, which causes your carpets to become soiled again within a few weeks. Don’t worry San Diego you’ve come to the right place. We can offer you a safe, professional carpet cleaning service, without the problems that a traditional carpet cleaner could cause you. We have been cleaning carpets in San Diego for over 27 years. Have thousands of satisfied customers who are now repeat customers. Our employees will always do the work, not sub-contractors. Our services are 100% guaranteed and if any stains re-appear, so will we, for free!...

I initially liked that they were "green," but I would absolutely not recommend them for pet stains. When the technician was leaving, I could still see the cat pee stains under a black light. The guy told me this was not a problem, that the cat couldn't smell them. In fact he could, and he urinated again in the same area. The manager, Jorge, tried to stonewall me when I complained, saying that their guarantee of satisfaction meant only that people wouldn't be able to smell the cat pee, not cats. (Aside from this not being what I had been told on the phone and in person, it was ridiculous -- I wasn't really worried about the humans in my life peeing on the carpet.) After I read them a section of their website -- which they have since rewritten -- I talked them into coming back for a touch-up on the top carpet. But the treatment still did not work. Only because I have covered over the carpet with another rug has the cat not returned to the scene of the crime. (And I could have done that without spending money at Champion Chem Dry-II. Total money down the drain.)

Description of Work
They replaced a section of about 12 feet of what was under a hall carpet. They then put the old carpet back down and supposedly cleaned it of stains and odors with a large machine.

We guarantee your satisfaction, and we won’t leave until the job is done right. We pride ourselves on the quality work we provide, while delivering great customer service. Check out our services offered and call or click to schedule an estimate today! 619-985-4767  …

We at Risk Free Serv specialize in COVID-19 Disinfecting, Water, Mold, Fire and Smoke damage remediation and restoration for residential and commercial properties. If you are looking to get an honest and affordable price for one of our services you can call us and request a free inspection and estimate. Risk Free Serv was established on the basis of honesty, integrity and fairness. Which is why we have the customer best interest at heart.  …

Tony’s Best Way Cleaning is a high end cleaning company that has been a San Diego staple for 48 years. Bottom line: we offer effective results on all 9 of our services - along with high-quality customer service and friendly, experienced technicians. We are actually referred by our competition for tough cases because of our expertise. We use the best methods available and are committed to five star service. We guarantee your satisfaction. We want to be the best you have ever used.  …

Champion Chem-Dry II is currently rated 1 overall out of 5.

No, Champion Chem-Dry II does not offer a senior discount.

No, Champion Chem-Dry II does not offer warranties.

Are there any services Champion Chem-Dry II does not offer?