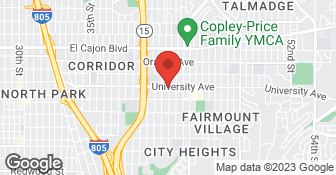 Mr. Calderon came out, listened to me with concern and was able to diagnose the problem in short order. He set out his work and took care for all our cats and laundry in the garage. Very courteous. And very professional. Problem is now solved. Will definitely hire again.

Description of Work
We had trouble with our irrigation system, one section did not water at all when the timer was set to irrigate the entire yard. Mr Calderon came out and set to fixing this vexing problem.

Provided general quote with no details. Cost was significantly lower than other contractor so asked for detail on what cost included, never heard back.

I never received a response.

Description of Work
I was looking for sod replacement and a retaining wall to be built.

HE PROVIDED BI-MONTHLY SERVICE FOR TWO YEARS. I REQUESTED TO REDUCE SERVICE TO MONTHLY. DUE TO WATER RESTRICTIONS IMPOSED BY THE CITY. HE FAILED TO SHOW UP. DO NOT HIRE!!! LACKS INTEGRITY AND PROFESSIONALISM.

Description of Work
HE DID NOTHING.

Description of Work
Calderon's Landscaping performed a major tree trimming job. They cut back the trees so severely, it took many months to recover and one beautiful King Palm Tree died (likely, as result of unclean cutting tools).

Description of Work
Replaced a cracked sprinkler valve. The valve was replaced in a timely manner and the work was excellent. Cesar returned my call promptly and was very direct and professional.

Initial installation looked fantastic. We had a piece of the sod die and he came right back out and replaced it. He checked on the progress a few times afterwards. He showed up on time, every time when he said he would. He also did some work on our sprinklers. Would highly recommend Calderon's and would definitely use them again. I called about 5 landscapers and he was the ONLY one who picked up his cell phone the first time I tried to call him. I left messages with 3 others and only ONE of them even returned my call.

Description of Work
Caesar is great! He quoted us to re-sod the front yard and re-seed the back yard. We were actually going to re-sod both, but he suggested for what we needed to only re-seed. It could have cost us a lot more.

We needed our yard spruced up before a big party. Our regular landscaper did not have the time so we called up Cesar who was very courteous and responsive to our needs. He came over the very next day to give us a quote. We needed a very fast turnaround and he assured us he would get it done the next day. We agreed and his team was there on time, if not a little early, to do all of the work. They hustled and got the most important things done. After he and his team were done, it looked like a brand new yard all in time for our party. He came back the next Monday to finish the little that was left to do and we found a leak in the main line irrigation in the meantime. The leak had nothing to do with their work but Cesar quoted a fair price to fix it and we had him fix that the same day. Throughout, he and his team were professional and quick.

I spent a few days researching landscaping companies and had a few out to provide a bid. Cesar Calderon was competitively priced and the most responsive. I knew I was going with Calderon's after meeting Cesar and going over the project. He's extremely knowledgeable and professional. After signing the contract he had his guy out the next day to spray the crab grass that was covering our lawn. After the crab grass was dead, one week later, he had a crew of six going to town on our yard. They took up the existing lawn, installed a rainbird irrigation system with 5 zones, roto tilled the existing soil, put down new soil, leveled the ground and installed new sod. The entire installation part of the project took less than 3 days. It looks amazing! I've had two neighbors knock on my door asking for Calderon's contact info. I absolutely recommend Cesar Calderon for any landscaping project.

Description of Work
Installed irrigation system, sod and terrace board.

It went rather well. I've had this house for about a year now and I was going back and forth to get a few things done and I spoke to him for the first time and I liked him. He was professional, he was clean, he knew what he was doing and he showed up on time. He also had a crew with him and I made sure he had insurance. So we went forward with him. I last contacted him 10 days ago for him to give me some invoices for me.

Description of Work
I used Calderon's Landscaping for a wide variety of projects. They ripped out my turf, leveled out the front yard a little bit, did a paved patio in the back, removed a lot of plants from my slope and put erosion fabric on it until I decide what I'm going to do with it, they also landscaped the whole front and back. They put in a new sidewalk and pathway up to the front door, exterior lighting with LED bulbs, drip irrigation and low water demand plants.

They were awesome! They showed up on time, worked a solid day, cleaned up better than my mother would have. They were wonderful. My yard looks better than it ever has. They were really great!

Description of Work
They did an awesome job cleaning two yards that haven't been touched for around 20 years!

After a cleanup of our trees that were in need of trimming we agreed to have Calderon's keep things ship shape. We're very happy,. always on time and very thorough. They do a great job.

Cesar and Isabel run a great business. We had a fairly large project and an aggressive schedule. Calderon's gave us a price that was significantly more competitive than the big paver companies with bloated marketing budgets. The project finished on time. I was very impressed with the work ethic of Cesar and his crew. On a couple of the work days, the crew was there until 6:30 or 7 just so they could finish on time. The finished quality was great and has held up well over time. Based on their at my house, some friends decided to hire them for a big backyard renovation of about $20,000. That project looks great too! I am saving up so I can hire them to redo my driveway!

Description of Work
Calderon's did a backyard makeover. They added approx. 300 sq feet of pavers over gently sloping terrain. They also added a large raised planter/seating area/retaining wall and some stone stairs. Lastly, they built an impressive fire pit!

Backyard Builders SD is a locally owned company started by a group of contractors that really care about a whole home improvement. We have narrowed ourselves down to being the best in the business at Turf and pavers. We have the visions to bring back yards and front yards to life. We have putting green experts, we have paver experts, we have sports turf, pet approved turf, and over all best looking turf on the market.. No job is too little or to big for us as we have team that extends up and down the coast of California. Overall our specialist will bring your dream yard to life and that is what we’re here for! We are the Turf Squad!  …

Our goal at Elements Design & Remodel is to make your home a haven. We work with you to create custom design solutions that are personalized for your individual needs, taste, and style. Yes, we will share our portfolio with you so that you can see our quality, craftsmanship, and completed design but we approach your project from square one designing a remodel that is unique to you!  …

We are Mercury! General contractor specializing in designing and remodeling residential homes, interior and exterior. We have an in-house design team to build your 3D model to your exact satisfaction. We have an experience of 12 years in the business.  …

How is Calderon's Landscaping overall rated?

Calderon's Landscaping is currently rated 4.5 overall out of 5.

What days are Calderon's Landscaping open?

No, Calderon's Landscaping does not offer a senior discount.

Are warranties offered by Calderon's Landscaping?

What services does Calderon's Landscaping offer?