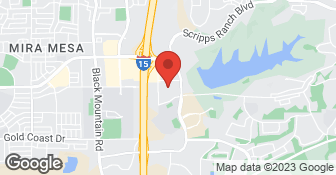 Black Mountain Plumbing, Inc. was founded in 1993 by Scott and Anita Ferrell and became a corporation in 2000. We are committed to excellence and integrity in the plumbing services that we provide to our San Diego area customers. We believe in offering excellent customer service and are proud to receive the Angie's List Super Service Award every year since 2005. Less than 5% of all plumbers listed on Angie's List are eligible to receive this award. We are members of the Better Business Bureau and have an A+ rating. We are also members of the Plumbing Heating Cooling Contractors Association....

Black Mountain Plumbing responded in a timely manner to repair two toilets that were running. We were kept updated regarding arrival time, which was within the 4 hour window originally given. Daniel was very polite and professional, explaining each thing he was doing to properly diagnose the issues with both toilets. He explained the necessity of replacing the fill valves, and the cost. He also checked and resealed one of the toilets at no extra charge, and provided a discount for the other services he provided. He left our home neat and clean, with two working toilets. We're very thankful to have found someone who does their work with such integrity (Colossians 3:17).

It went ok the day of. John did not tell me anything before he left that there may be further problems. Printed receipt 3 days later where I read if toilet ran again, they would need to "rebuild" toilet and replace shut off valve adding another $536 to the $129 he charged for the gasket. That gasket lasted 10 days? Nov 18 to today Nov 27 where I hear ghost flushing again? So over $650. I could buy a new toilet for that Have used them for years. Now I feel they ripped me off. Will be calling other plumbers, hopefully honest ones to find costs. Should not treat continuing customers this way.

Problem was diagnosed and blockage cleared within an hour. Excellent work.

Mr. Kent was prompt and informative about the work that needed to be done. He also followed covid protocol when doing the work. I was satisfied with the work done.

Description of Work
Toilet replacement and repair of another

Perfectly! I have relied for all of our pluming issues for many years, and I will definitely use them exclusively in the future.

Replaced kitchen sink DishMaster. Replaced downstairs toilet. Reseated tow upstairs toilets. Installed hand held shower upstairs. Unclogged two sinks. Robert and Carlos were great. They did a fantastic job on everything. They even stayed late so they could finish the job. We couldn't be happier.

Description of Work
replaced and fixed a lot of things

Daniel arrived on-time, he explained all the work to be done, and got right on it. He cleaned up all work areas. Daniel was very professional and friendly.

The work was outstanding. Soloman was familiar with the obscure shower cartridges that we have in our bathrooms, and replaced them perfectly. He also cleaned out several bathroom sink drains. Now, the water flows down the drains like it should. He also installed a new bathroom sink faucet and it all looks wonderful. I am incredibly impressed with his work, as well as the professional way in which my initial phone calls were handled by the staff. (A long-time professional plumber actually answered the phone, and was familiar with Rowe & Perrin plumbing fixtures, an obscure brand from the UK that no other plumber I contacted had ever heard of; most impressive!) This is a stellar organization.

Description of Work
New cartridges needed to be replaced in two showers, a new faucet was replaced, and several bathroom sick drains were cleared out.

We paid $230 for this company to bid a project. They couldn’t do the work they came out to bid (either fix option - line or replace the pipes) and they stayed for multiple hours to rack up the price anyway. They also put our home purchase contingency timelines in jeopardy by wasting our time with their sham bid work.

Description of Work
Bid to either replace or line pipes

Details of your invoice... Video inspect the main sewer line through an accessible clean-out. Locate and mark any problem areas found, billed hourly @ $230 per hour. Additional $25 for flash drive. Arrival Time 10:43am Start Camera Inspection: 10:50am - Finish Camera Inspection: 11:50am Departure Time 12:15pm BMP was able to camera from the 4 inch ABS cleanout close to the front door up to the misalignment that is just downstream of the property line clean out behind the hot tub. BMP found it to be approximately 15 feet of clay pipe with multiple misalignment's that will disrupt the flow along with root intrusions at multiple connections. BMP found what appeared to be a section of the clay just prior to the city saddle to be fractured exposing a void and separation between the two drainage connections located in the alley way behind the house approximately 8 to 12 feet below ground. BMP referred a pipe lining contractor to see if a liner could be installed within the drain line in order to correct the issues mentioned above in the least invasive and most cost effective manner. If lining cannot be done, the line must be replaced from the clean out behind the hot tub to the city connection. ____________________________________________________________________________ We suggested the most cost effective way to take care of the issue. We charged for one hour for our service. If the lining company can not correct the issue, the cost to dig up and repair the pipe would be approx 4-6 times the amount of relining the pipe of this length. Main issue is 4' down, under the retaining wall and palm tree where the misalignment is. Continue lining to the saddle to eliminate current root intrusions. Please let us know if the misaligned and failed sewer main can not be relined. As with all sewer dig ups, we credit back the video inspection with repair.
5.0

Technician was knowledgeable and friendly. He explained each of his steps as he was performing them. We determined that although a fix needed to happen quickly, it would be ok to wait for my remodels to start.

good, as usual. these guys are very consistent.

Excellent. Called them at 2:20, and before 3 pm technician Adam was knocking at my door. 2 hours later the leak was found and fixed. Adam cleaned the area from debris, disinfected all surfaces he was working on, and left. The only thing that left for us is to wait for when we can turn water back on.

Description of Work
Determine Location of A Leak And Fix It

The plumber was fast, friendly and did a great job!

Description of Work
Repaired some indoor faucets and a garden hose bib.

This was our first time using Black Mountain Plumbing. One thing we’ve learned over the decades of house maintenance is the importance of using a skilled, knowledgeable person doing the work, because if the best job isn’t done on the installation or repair, the cost of subsequent re-do’s down the road winds up far exceeding the original project cost. Especially when the job involves opening up drywall, you want a consummate professional who can figure out the best way to configure the repair which is often tricky or precarious. So when the p-trap under our shower developed a leak through the kitchen ceiling we knew this would be a job requiring a skilled, “cerebral” plumber. I’ve dealt with lots of plumbers over the past 30 years, but this is the first time we’ve ever called one up and gotten answered on the first ring. We spoke to Robert, who happened to be an actual plumber filling in on the phone line! How amazing is that! I know he was just filling in, but it was a pleasure scheduling our appointment with someone who had real technical knowledge of our plumbing situation. Besides the leak, we also had outdated, 12 year old CA Faucet shower stem cartridges that needed new washers and Robert told us he would do the research for parts and have them ready the next day for our appointment. Now I am used to people promising me all sorts of things over the phone and it was a Monday, so Robert was being deluged with multiple calls, so I was shocked the next day when Robert actually did follow through with researching the parts exactly as promised, and the plumbers he scheduled showed up the next day on time with the parts-unbelievably impeccable service! Our plumber for the day, Solomon was everything I hoped he would be. This is a guy who can’t go to a restaurant without noticing and wanting to correct all the plumbing flaws. If you want a thorough plumbing inspection with heads-up on all the current and possible future maintenance issues so you can be proactive and save yourself a lot of future expense and grief, this is your man. Besides the main problem of the leaking shower p-trap, we had saved up a list of minor issues that we had put off dealing with and he patiently addressed each one and gave us a lot of information about each problem and his honest opinion of the best options. We expected it would take multiple appointments, but after figuring out the task order, he (and his assistant Carlos) just got to work and tackled each one and completed everything on the same day. We’ve been used to doing things piecemeal in the past, but this is was the most productive time and cost efficient way to get through a list of deferred maintenance, and we really appreciated that the company was able to get everything done in this manner. The shower p-trap was a difficult access, but Solomon did it with surgical precision, made very little mess and cleaned up leaving no trace. Then, after a full days work when most people would just want to go home, he offered to check our house water pressure which turned out to be too high. Since this was not on our original list, and it was the end of a long day, I didn’t expect he could replace it, but he added it on and finished it. He also noticed the straps on our water heater were loose and tightened them. This was service beyond anything I’ve ever experienced in decades. The quality of work and attention to detail makes them worth every cent they charge. They are an excellent value and they’ve earned and deserve their high ratings.

Timely and Excellent Service. I called Black Mountain Plumbing out to clear a clogged drain. Solomon, the technician, was out first thing the following morning. He explained exactly what he was going to do. Then he ran a camera down the line to ensure that it was clear. The price was fair and much less than I had anticipated. I will call Black Mountain Plumbing whenever I have plumbing issues and I will not hesitate to refer them to my family and friends.

the guys were awesome and very professional. Will definitely call if I need a plumber again!

Description of Work
needed to have work done on toilets

Solomon was very honest and professional. His job was very thorough.

very well. They showed up on time and completed the quickly and effectively. They communicated the price before hand since there was an increase in the price of the pump since the estimate was provided. Tested the pump to make sure it worked before leaving and explained some of the features of the timer.