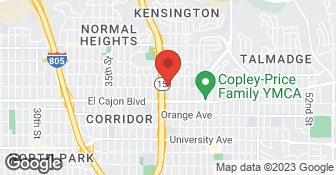 I highly recommend Bison Constructors. We hired Bison for a large project for a Homeowners Association to rebuild all of the stairwells due to termite/water damage. Bison came in much lower than most of the other contractors. All contractors mentioned that if there was additional damage there would be additional costs. This was somewhat concerning because it could essentially become a blank check once the project is started. There did end up being additional repairs needed but Bison has been great and completely fair with the extra costs. He was good with communication, scheduling and completeing the job on time. His work has also been outstanding. He did a really nice job and it turned out better than we hoped. We've since hired him to do several other projects around the building. I would absolutely recommend him for any project and have already done so.

Description of Work
Multiple stairwell rebuild for a condominium building

In 2015-2016 Jason (Bison Constructors) completely transformed the exterior of my house. There was severe dry-rot that had destroyed the 2nd floor deck and had eaten into structural beams holding up the 2nd floor bedroom. The board and batten siding was in seriously dilapidated condition. We had several dry-rot experts come to assess the damage. One said we should move out immediately because the house was about to fall down. He said he would charge $80K to repair the damage. Another contractor estimated $100K. Others wouldn't touch the project. We found Bison Constructors online and asked Jason to come out and inspect the damage. He noted that the 2nd floor was actually sagging several inches. He said he would have to remove some of the siding to see how the beams were run before he could give us an estimate. We gave him the go-ahead to remove what he needed to give us the estimate. I thought that was a good sign, that he was the first one to delve deep enough to find out what was going on before throwing out a huge bid. I braced myself waiting for his bid. Finally he sent us back a bid for $12,000. He showed us exactly what he would do, jacking up the second floor, replacing and reinforcing structural vertical beams, replacing horizontal beams on the other side of the house, completely rebuilding a new deck and replacing the rotting board and batten siding all around the house. We really had a sense that Jason knew what he was talking about and that we were in safe hands. The bid was so low compared to what we were expecting that we threw in replacing 2 sliders and 5 windows. That was phase one. I wanted a permanent solution to the board and batten siding that was still vulnerable to rot and needed a thorough paint job. I found a pre-painted composite siding called LP Smartside which is dry-rot and termite resistant and has a 30 year warranty. Jason gave us an estimate to tear off all the old batten and board siding and replace it with the Smartside, install a new chimney, replace 2 doors and 3 more windows. The price was very reasonable and he let me do any painting involved which saved me money. He researched the Smartside product to make sure he was installing it according to the manufacturer's specifications. The end result was stunning as you can see in the before and after pictures. Not only does it look like a new house it is also structurally sound and resistant to dry-rot and termites. Throughout the whole project Jason was the best person to work with. He always listened to what we wanted and worked with us to figure out the best way to do things. He would always keep us informed of what was going on, any possible delays or variations in cost that are inevitable on any big project. He also cooperated well with another contractor that was installing new gutters. He's extremely hard working, dependable and very smart. Also respectful of our privacy, didn't play loud music, etc. always cleaned up. We were really grateful to find Jason and refer him to all of our friends who need work done on their homes. Jason replaced a window for a friend of mine and the result came out fantastic. When the old window was removed the stucco had to be torn out 3 inches around the frame of the window. Jason replaced the window and repaired the stucco so well you can't tell it was repaired. See the picture! My friends are extremely happy with the way it turned out. We all agree that Jason is a true professional in every sense of the word. Thanks Jason for the amazing job you did on our house! You're the best!

Home Remodeling Company. With over 25 years of superior craftsmanship, we offer the trendiest design, best installations, and exceptional service. Together we will design and build your Dream Home. We provide Energy Efficient products and services for Windows, Solar, Roofing and Exterior Paint.  …

Problems We Solve: Discover the Teknik Difference After decades of experience, we've built our entire business around solving these problems. Discover the Teknik difference. Discover On-Time, On-Budget Completion Their process looks like this: Abbreviated Planning and Low Bid - It takes time and money to complete extensive research on your home and provide a truly accurate quote. It's much easier to measure once and make assumptions about what's in your walls rather than to actually look. So they bid assuming a best case scenario with no surprises. The Teknik Difference: Introducing The Perfect Remodel Plan At Teknik, we're on time and on budget just about every time. That's because we use "The Perfect Remodel Plan," our proprietary 3-step plan proven to eliminate headaches and deliver your project on time, so the only thing you have to worry about is planning a giant house party when your dream project is complete. Step 1: Dream Design Step 2: True Quote Step 3: Complete On-Time Discover Our Team: Feel Great Handing Over Your Keys We understand the anxiety that comes with subcontractors. Introducing the Team You Can Trust: At Teknik, we employ our own crew who we call "The Clean Cut Crew," named for their tidiness on the job and their clean cut appearance. Our Clean Cut Crew is: Clean cut Professional and Friendly They clean the project space every day before leaving Decades of Experience Serving San Diego Homeowners When you choose Teknik Inc. for your home improvement projects, you are choosing a company with extensive experience in San Diego home remodeling. Our general contracting company has more than 20 years of experience on our side, and we are committed to serving clients throughout our community. Plus you get our "Teknik Three T Promise." You get a: True Quote Trustworthy Crew Timely Completion  …

How is Bison Constructors overall rated?

Bison Constructors is currently rated 5 overall out of 5.

No, Bison Constructors does not offer eco-friendly accreditations.

No, Bison Constructors does not offer a senior discount.

Are warranties offered by Bison Constructors?

No, Bison Constructors does not offer warranties.

What services does Bison Constructors offer?