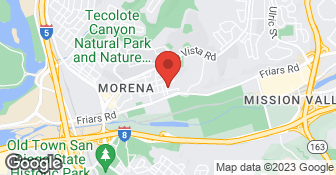 Bartle Brothers Moving is a local,family owned San Diego moving company. We are an accredited A rated BBB member, who has been moving San Diego for over a decade....

They were very professional and efficient. It was just a good moving experience.

Description of Work
I have used Bartle Brothers Moving for moving.

In short: I've used over 5 moving companies in the past and this is the *only one* that I will recommend to friends and use again myself. The crew was enthusiastic, courteous and careful. They asked where I wanted all the boxes and furniture and truly respected my answers and not just going through the motion. At some point, the owner had to leave and the crew continued the same level of service. I did not even know the owner had left. More details: The move was not an easy one, it required a crew of 4, 2 trucks and 10 hours - as was quoted by several moving companies. Chris ended up bringing in a crew of 6 and 3 trucks to speed up the move. We've had escrow delays and had to vacate our home by 10/30 for our new renters moving in on 11/1. Chris had been very accommodating working with our unknowns and sliding move dates. He also dropped off a stack of free boxes (not just the typical free loaner wardrobe boxes) and they really came in handy at the last moment. On move day, the crew arrived with great enthusiasm and ready to work. I felt that they had high respect for their profession and they are proud of themselves. They worked quickly, but not carelessly. After many mediocre to bad experiences with moving companies, I was being extra watchful on certain items yet also carried a laissez-faire attitude so I would not be as disappointed. Yet I was truly delighted by their work. When I told two of them, separately, that I'd like the boxes in the garage to be stacked spread out in aisles instead of in a tightly packed pile, they told the others when they saw someone else not picking up on that idea. It's not common to let the boxes take up so much room across 3 garage spaces but the aisles give us much easier access before they're all sorted out. Plus, we'll be installing shelves so this method avoids the need to relocate them again. After they heard about this plan, whenever they had to start a new aisle, they confirmed with me how far I prefer the boxes to be kept away from the walls. Yes, they paid that much attention to details.

Description of Work
A move of a 3 bedroom, 2.5 bath, 1 home office, and a garage full of belongings from a 2-story 2100 sq ft house, including several heavy and tricky items like commercial grade treadmill, high-end massage chair and sleeper sofa etc.

In August 2009, my husband and I moved using the services of Bartle Brothers Moving, Inc. Choosing this company was a horrible mistake, and one I continue to regret. The carelessness of the moving team caused significant damage to many pieces of furniture. They ran over a dining room chair with the truck and then blamed us rather than accepting responsibility. They nicked, gouged, and scratched at least half of our belongings. They caused significant scratches on the walls of the house we were moving out of causing many areas to have to be repainted. The service recovery (or lack thereof) offered by the owner, Chris Bartle, did nothing to ease the situation. He did pick up the broken chair for repair; however it took almost a month to return it. Appointments were made for him to return it earlier only to have him ?totally forget? about it, or reschedule because he was tired. We did finally get it back, although the wood putty was a completely different color than the chair?s finish, and there were still many gouges in the wood that were not addressed. He had shown an initial interest in looking at the other damaged furniture however when he was scheduled to drop off the ?repaired? chair and look at the other damaged pieces; he left without alerting us he was on the doorstep. When I called to discuss this, he not only was adamant that the chair was beautiful and I had no idea what I was talking about, but he became extremely defensive about the entire situation. Overall, throughout the entire experience, he made it very clear that our damaged furniture and poor experience were not a priority to him. If you value your belongings, I strongly recommend that you do not use this company.

Description of Work
They moved us - and did a horrible job.

Reliable Delivery is southern California’s most highly regarded providers of full-service moving and storage. A family-owned, fully-licensed and insured, residential and commercial moving and storage company, Reliable Delivery specializes in moving antiques, lighting fixtures, designer furniture and other fragile furniture. We have the experience, equipment, supplies and professional movers to handle any Southern California move. Our professional movers are dedicated to providing reliable, efficient, professional, and personal service and we'll work with you to accommodate your specific moving needs. Reliable Delivery services San Diego county, Los Angeles county, Orange county and beyond.  …

MSJ Delivery is a full service residential and commercial moving, storage, and delivery company. We also offer professional white glove service for retailers, interior designers, and staging companies. Give us a call if you need something packed, moved, stored, or delivered. We can manage your incoming receiving and inspection at our facility. Our warehouse is secured under 24 hour surveillance. Our employees are fully covered under state mandated workers compensation. We carry the proper licenses and insurance to enter some of the most affluent homes and high rises in San Diego. Rest assured our crews are safe, careful, and courteous. Our team leader will contact you 30 minutes prior to arrival. We put extraordinary effort into our hiring process. Much of our our success revolves around the quality and professionalism of our people. We do not employ casual day laborers. Teamwork and long term employees give MSJ Delivery the highest ratings in the industry. Be sure to check out our online reviews!  …

Bonded
Insured
All statements concerning insurance, licenses, and bonds are informational only, and are self-reported. Since insurance, licenses and bonds can expire and can be cancelled, homeowners should always check such information for themselves.To find more licensing information for your state, visit our Find Licensing Requirements page.
General Information
Free Estimates
Yes
Eco-Friendly Accreditations
No
Payment Options
MasterCard, American Express, Discover, Visa
Senior Discount
5%
Warranties
No

Bartle Brothers Moving is currently rated 3.7 overall out of 5.

No, Bartle Brothers Moving does not offer eco-friendly accreditations.

No, Bartle Brothers Moving does not offer a senior discount.

No, Bartle Brothers Moving does not offer warranties.