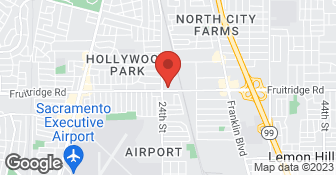 Zajic Appliance Service and Sales of Sacramento is locally owned and operated since 1958. We are committed to bringing you top name brand appliances at low prices. When you visit our store, you'll immediately feel the difference with one-on-one personal service by our knowledgeable sales staff. We will work with you to find an appliance that fits your needs, budget and lifestyle

It went great. The repairman was on time and fixed the problem with in 15 minutes.

Description of Work
Oven would not come on.

He brought the parts he needed and fixed it in about 15 minutes.

Description of Work
Fix a refrigerator

GREAT! The repair was super fast. I previousy used Zajic for another dishwasher and that's why I called them again. Well worth it.

Description of Work
Bosch dishwasher would not run, was full of water.

You sent over the wrong kind of business. They don't do the repairs I needed. They were very nice but wrong industry.

I had them come and fix a washer. The problem was the cold water was not flowing in at a normal rate. The repairman concluded that the supply hose was clogged and tried to clean it, but it didn't do anything. I'm not mad that they couldn't fix it but I actually think the problem is the panel or sensor, not the hose, because on very rare occasions the cold water does flow in at the normal rate. The man also said the water is coming in at 70% the rate, but actually it's more like 5% the normal flow. I feel like someone else could actually repair it. The hot water supply works fine. FYI I paid $99 for them to check out the washer. The repairman was professional and they were pleasant to work with. I'm just not convinced that their conclusion was correct.

I was really happy with them. They did a very good job.

Description of Work
They're are taking care of my refrigerator.

Very well; I called for service & a technician appeared within an hour of my calling; I was very impressed. Technician, Brian, was very neat & polite, got right to work. Couldn't find anything wrong with my refrigerator (thank heavens!) so I was charged only for a service call. He did examine both fans, pumps, etc. Turned out it was our own carelessness that caused the problem in the first place. I would definitely call Zajic again.

He was amazing. Very patient and thorough.

Description of Work
The repairman fixed a leak in our dishwasher.

They were conscientious, but they missed the mark several times. It took about a month to get it repaired and many repeated visits for them to ultimately diagnose what was wrong and replace parts. They did ultimately fix it. Since I am retired it was not a big issue, but for someone that is working it is. They don't really let you know when they will show up until that morning. And you can't really work around that if you are working.

Description of Work
Repaired a dishwasher.

Please note, that I do everything possible not to ever write negative feedback, but this company may be on defense, most likely it's the way they are reacting when they have been caught? 1-I have used Zajic Appliance for past 5 years, because of Angie's list of recommended places. 2-At one point I questioned why I am paying for the same part being replaced again, but the only response was another bad board. 3- On 8/25/2017 I called them again, because my JennAir was not cooling. The same technician came by, briefly examined the unit and showed me the old relay, and installed a new relay switch which he fetched from his van. This job took him 15 minutes, and the cold box was working but not cooling to it's potential. I was told that I might need a new refrigerator or replace the compressor if started making funny noises, which it did stop working within 30 minutes after he left. 4- I called the technician, they called me back and they told me that there wasn't else they could do, except buy a new refrigerator, or pay about $800-900 for a new compressor, but it could be more, as this type of work requires the refrigerator to be removed from the house in order to install the compressor. 5- I shared my concern with my best friend who is an engineer that designs surgical operating equipment. He took a quick peak, and the first comment was, that I take a look at the back of the refrigerator, and how filthy and impacted with dust, and that the air filter was also clogged. "Why didn't the appliance person ask you to vacuum or at least advise you to keep it clean?", he asked. It never occurred to me, as I fully trusted Zajic. 6- My friend unplugged the relay switch and he showed me that it was definitely not new, but I told him that this was installed a few days ago. I was very upset when he told me this ,and I took pictures and emailed them to the Zajic (which are attached). And, I also posted Zajic's comment below for your own eyes to see. I am quite upset with them. When I called them, they told me that anything with a red dot is new part. They "offered" to give me a refund only for the relay switch, but not without a struggle. See, comments below from Zajic, and please note that they were not at all nice about refunding me the money, which I don't expect to get back since I did write them a check, but I do hope future customers read this, because they certainly deserve to know what I went through. On Sep 1, 2017, at 4:51 PM, (Zajic's Appliance response below) Rick, We/Gary didn't install a used part. Whether its faulty or not is to be determined. Your asking us to take your word for it without verification. For all we know, your friend may have damaged the relay removing it. It's not a money issue at this point, rather the principal that your accusing our company of wrongdoing. For any possible further refund, and return visit is needed. (my response) Really, how dare you? You have serviced my refrigerator for the last four years and replaced the same parts twice at times within a year and now you think I deliberately may have altered the parts? Even worse, did I mention that Gary never even mentioned to advise me to vacuum all the dust, because he never has. I will give you two options: 1- you provide a full refund 2-if no refund, I will certainly report you and give you the feedback you deserve. Rick Sent from my iPhone

The technician came out and diagnosed the problem, ordered the part and installed it 2 days later. Everything is functioning properly again.

Very good experience. I’ve used them for years. I’ve bought a refrigerator, several dishwashers and a stove. There was no cost. They didn’t find anything wrong with it, it was probably user error.

Description of Work
We had a problem with the dishwasher we bought. They came out and took a look at it.

Frozen fill tube and didn't have a fix. Suggested turning unit off to unfreeze tube. Turned off unit, removed frozen items, left freezer door open for 6 hours and fill tube unfroze. Probably fill hose will refreeze because poor design and not using much ice in colder months. Maybe emptying ice bin occasionally in winter so the fill tube will be used more often will keep it from freezing.

Bryan was very knowledgeable about the problem. Had it fixed in no time and cost less than the over the phone estimate. We will call them again if we have problems with anything they are versed in.

Description of Work
Leak inside a Samsung Refrigerator.

They have been very good. The repair didn't work so they are coming back. It is an on-going process, but they have been attentive in trying to solve the problem.

Description of Work
They replaced a pump on a dishwasher.

Very well. The technician was clear and professional. He identified the problem and quoted a price. Because he did not have the part with him he said it would be ordered and I would be called to set up an installation date. That all happened in a very efficient and satisfactory way.

Repair was taken care of quickly and on time.

He explained some things to me about my machine that I did not know--so there was actually nothing wrong with it.

Description of Work
Washing machine repair. I also bought a microwave oven from them and had it installed.

Very good - Took some time to get the part ordered, but quick and efficient repair once it came in

They did a great job and they had a very reasonable price.

Description of Work
They repaired the ice maker in my refrigerator and fixed my dishwasher.

The tech repair it and showed me the broken part and gave an idea why it failed. I made a appointment for Wednesday am. They called Tuesday am and they had a tech in the area now and he had time to do repair. I said great and the tech showed right away.

Description of Work
A new value need be installed to repair the freezer.

Had a appointment on Monday a.m. They called on Tuesday a.m. said tech was in my area and could do it today. Tech came over and installed new valve. Tech gave me a amount and time it would take. Repair went great.

Description of Work
Freezer had ice forming on bottom. Had to have a new drain valve installed.

They are always efficient, on time. Had them work on several appliances over time. Same equality.

Description of Work
Repaired our oven with a new heating element.

Dependable Rooter and Plumbing is your #1 choice for all residential service and repair needs in Placer and Sacramento counties. At Dependable Rooter & Plumbing, we take care of all your plumbing needs, and we guarantee your complete satisfaction with the final results. We are known for our dependability and our high quality of service, so you can turn to us for plumbers you can trust. At Dependable Rooter & Plumbing, we offer emergency plumbing service for those times when you simply can’t wait for a scheduled appointment. We know how crucial it is to have serious plumbing issues immediately inspected and repaired. This is exactly why we provide our customers with fast response and service when they need immediate service.  …

At Vine Electric, we provide Electrical (Electrician) services in a manner that has yet to be met. We have State certified electricians and knowledgeable staff. We give free estimates with a no-hassle buy at the end. Please feel free to contact us, we will do our best to help you.  …

Zajic Appliance Sales & Service is currently rated 4.9 overall out of 5.

No, Zajic Appliance Sales & Service does not offer a senior discount.

No, Zajic Appliance Sales & Service does not offer warranties.

Are there any services Zajic Appliance Sales & Service does not offer?