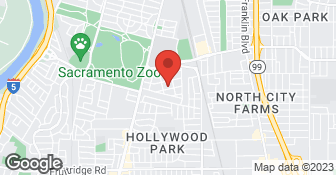 Serving the Greater Sacramento Area Since 1988. Fully licensed and insured for your protection. Crews are trained to be detail oriented and efficient. We provide all equipment and supplies necessary to perform work. We are currently offering a two-hour discount to new clients with a minimum purchase of four hours of cleaning

It was a disaster. They never even came to clean my house because I could never get a hold of the person. I actually got a special that they had. I got a Living Social promotion through them back in November of last year. I left messages, I sent e-mails and I went to their website, but I could never get a hold of them. I finally called Living Social and complained to them. They said that I had two options; one was to try and contact them. So, they contacted the cleaning service and they apologized. Then they came out and gave me information of how much it was going to be and how much time. There were no problems. However, when I went to set the appointment again, there were unanswered phone calls and they never responded to my e-mails. I would not even try to use them. They don’t respond to phone calls or e-mails. I started trying to get a hold of them in April and I finally had to call Living Social in May to tell them that I was having a problem with the House Cleaners. They said they would refund me the money which they did. It was about $79 for cleaning a two bedroom house.

Description of Work
I contacted House Cleaners for housecleaning. I first contacted them in October and they came out in December.

This company had a deal through LivingSocial (like a Groupon) that offered 3 hours of home cleaning for $65. I bought this deal and called to schedule a cleaning. I spoke with Sylvia who said she would call me back to schedule. A couple weeks passed and I did not hear back. I called back a second time and she apologized for not getting back to me, saying she would call me back this time to schedule. Another week or two passes without a call back. I called back a 3rd time, leaving a message that I was getting frustrated with the lack of follow-up and would really like to schedule my cleaning. That last call was placed several days ago, and I have still not received a response. I got so fed up that I called LivingSocial today and got a refund (luckily, LivingSocial had no problem giving me a refund and their phone rep. saw that other customers had also reported difficulty getting a hold of this company to schedule an appointment). It probably was best that I didn't end up using this company because the lack of professionalism shown by Sylvia makes me weary about how well her employees would have cleaned my house.

Description of Work
No services were performed because I was never able to schedule an appointment.

Sylvia never showed up for the appointment like she promised, but three of her workers did. One of the workers happened to be sick, and I became ill shortly after. They stayed in three rooms, and didn't touch areas of the house that I was concerned with. The equipment that they used was very old and dirty. For example, their vacuum cleaner didn't suck up anything. Nothing looked any different when they left. They actually created more of a mess. I paid Sylvia in full that day, and she promised that her workers would return to correct their work. Sylvia stopped responding to my follow-up calls, and the work was never completed to my satisfaction.

Description of Work
I hired them to clean areas of my 800 sq ft house that I physically can't.

Over 30 years experience with window and carpet cleaning. License bonded and insured. Also carpet repair available, restretch, patches, seam repair, pet odor removal, tile and grout cleaning, and upholstery cleaning. Don’t be scammed by low prices in the door cause chances are you will pay more than what I would charge guaranteed have a great day.  …

My name is Josh, owner of Joshua's Painting Service. I have been painting for the majority of my life, with my dad as a kid until now. I'm blessed to be able to say I truly love what I do. I enjoy being a painting contractor. Whether you are an excited homeowner wanting to make their home new again, a realtor looking to make a client happier or a property manager sprucing up an old building. No matter the job, big or small, I am there every step of the way with my employees throughout the process. Whether I am giving free estimates, suggestions on colors, doing the drywall and stucco repairs or replacing dry rotted boards I AM there. Every day, every step of the way. I take great pride in all that I do but especially in my prep work. Without good prep work the finished product won't hold up. But of course my favorite part has to be the finished product, seeing a home or business transform into somebody's dream is always the best! My promise to you, my prospective customer, is to always be there to answer my phone, be on time, and do exactly what I said I would do for the price I said I would do it for. I know if I do these few things I will always be in business, always be busy and always have satisfied customers.  …

All statements concerning insurance, licenses, and bonds are informational only, and are self-reported. Since insurance, licenses and bonds can expire and can be cancelled, homeowners should always check such information for themselves.To find more licensing information for your state, visit our Find Licensing Requirements page.
General Information
Free Estimates
Yes
Eco-Friendly Accreditations
No
Payment Options
Check, Visa, MasterCard, American Express, Discover, PayPal
Senior Discount
10%
Warranties
No

House Cleaners LLC is currently rated 1 overall out of 5.

No, House Cleaners LLC does not offer eco-friendly accreditations.

No, House Cleaners LLC does not offer a senior discount.

No, House Cleaners LLC does not offer warranties.