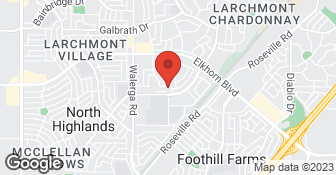 Freeman Roofing Company is family owned and has been in Sacramento since 1983. The owner is on all job sites, we pay close attention to detail. Our roofing company takes pride in the quality of our workmanship, as well as, the cleanliness of our job sites. We are fair, honest, hard working people that take pride in what they do. Look no further, Freeman Roofing can handle all of your residential, commercial, and roof repairing needs. Please no realtors or general contractors, we cater to owners only. **Website under construction*

Great guy, and was at our place in hours! Did an amazing job and would 100% recommend him to anyone! Thank you Jim!

Description of Work
leak in roof

He did 5 star work. Explains everything. Easy to talk to.

Description of Work
Did contract at this time

I hired Jim Freeman roofing contractor. The work was very high quality and priced fairly. Very dependable, honest and professional. I am very happy with my new roof.

Description of Work
I needed a new roof on my house

Said he got the leak but it leaked twice more after he came to repair a second time. I just wanted money back which he did but it was a major hassle!! Terrible PR and responsiveness.

Mr. Freeman went above and beyond what was in our contract. He reinstalled 4 roof flashings so water did not travel under the tile. He replaced approximately 3 broken field tiles. He sealed tiles and flashing were needed. Mr. Freeman came back two different times to fix 2 other leaks not related to his repairs at no charge. I would highly recommend!

We had a roof leak that needed to be fixed immediately because another storm was coming and we called Jimmy who arrived within an hour and fixed it perfectly! He was hardworking and kind! We would absolutely hire him again and recommend him to anyone and everyone!

very well, workman were on time and did a great job, no complaints and I would definitely recommend them to friends and family

Description of Work
residential re roofing

Not worth the dollar amount. I could of went on the roof and caulked, 100.00 wasted

Description of Work
Roof “tune up”

Service was performed well, and the service was very informational.

Description of Work
Roof needing reevaluation and minor tune up.

I paid $99 for one of the AL deals. They never contacted me and their phone number, as listed on the internet, has been disconnected. Need I say more? And what shocks me even more is that Angie's List is allowing them to advertise the same special again.

Description of Work
I really needed a roofer.

Dear [Member Name Removed], I did come out to your house, you have a metal roof which can not be walked on. You said you knew that and the reason you purchased a composition roof inspection / tune up was because your patio is leaking. Which is a wood structure with a composition roof which was built with out a permit. I sent you an estimate and never heard from you again. Thank you, Jim Freeman
5.0

Took a long time to set it up. Jim said I am out of his area and he had to come too far. I gave him some gas money in addition to what I paid Angie 's List

I paid $99 for 10 minutes of work from the Angie's List coupon.He took 4-5 days to get back to me after leaving multiple messages and missed the first scheduled appointment. He walked around the roof and took a couple of pictures. No caulking or anything else was done. He gave me an estimate to replace the flask on my roof which was 4-5x more than other companies. Only reason he got a D and not a F was because he actually did some work 3-4 years ago when I had him come then. But the fact this company has an A rating shows how inaccurate Angie's List is.

Hello [Member Name Removed], Since you left my address on your complaint, I'll will assume your the guy at [Member Information Removed]. You purchased a composition roof inspection/ tune up for a walkable roof surface. You have a tile roof that is very steep. Sorry, but I could not render service and told you to get a refund from angies list. Let me know your correct address if I have the wrong one. Thank you, Jim
5.0

It went just as he said it would. They started on a Tuesday with a subcontractor doing the tear-off, then his crew got the new roof on in just a few days. He had another subcontractor install gutters the next week, and it took a couple more weeks of short-term work. Jim inspected the gutters and called the sub crew back in to finish things to Jim's satisfaction, then the County inspector found a couple more things. All in all it took a month, but the actual work took about a week. We got 4 bids, all from top-rated Angie's List contractors, and Jim's was the lowest by a few hundred dollars. We have no regrets with that decision. The bonus was that someone earlier on his schedule cancelled, so rather than having the work done in October or November, he did it in August. We are very happy with the whole process.

Description of Work
Jim Freeman and his crew installed a new roof for us.

Description of Work
i paid for a roof inspection.... i emailed him like angie's list said to do and i gave my info to him showing my order number and payment made.... i NEVER heard from him... never returned a email to me and i find that so unprofessional.... cannot work or hire someone who runs their company like that...period

Went as expected. Showed up on time and completed work in workmanlike manner.

It wouldn't be fair to attach him the guarantee that he fixed the leak, if you know what I'm talking about, because nobody can guarantee that water won't blow sideways between a shingle on the edge; but he did and then we haven't had weather like that, either, so I can't say yeah he's great, he knows exactly what's what, but from what I saw him go around with I've got a pretty good gut feeling that the leak is going to be stopped. He went up there. He spent time going around the flashing, he talked about different flashings up there, just some positive things. I had him before the roof, and he didn't like the tree on the roof, which I knew isn't any good either, so he was good going around, looking at stuff. Ninety-nine bucks for a guy to drive out to your house and spend an hour patching your roof, I mean, there's nothing bad with that. I would use Freeman Roofing. The only thing is in Angie's List with roofing, I wanted to put in an attic fan. Not the electrical because I did that. You know, just do the roof and put that in, and I talked to him and he said, well, I don't do it, and I don't hold anything against him for that. It's just hard as heck to find anybody to do that kind of stuff. I'm looking for a roofer to pull the roof off so that when they nail that attic fan back down and there that all that flashing stuff is all right, and so it's really a roofing job. I didn't even want the electrical done. It wouldn't be any more roofing than if they pulled any other pipes or flashing or anything else. Lots of people get attic fans up there. It's tough to get somebody in that thing, and I was hoping that he would do it too, and Angie's List really didn't delineate it, and my point is if Angie's List has people that do that, to put that in their advertisement, that they'll do attic fans or stuff like that.

Description of Work
A $99 roof maintenance package. I've had different houses at different pitches with different rains blowing and a leak here or there, and so he went up there to go seal it.

Work done. Estimate given with no sales pressure at all. Answered all questions including how long I can go without replacing roof.

Description of Work
Roof inspection and tune up.

Better than expected. Jim was punctual, polite, informative and easy to work with. Will call him again for any roofing need.

He was prompt, called ahead to verify I was present, did minor repair and stated roof was ok.

I had to keep calling to get the appointment scheduled. Mr Freeman was not a very pleasant man. For the length of amount of money spent, he spent very little time doing the inspection.

He did come out and spent about 45 minutes going up on the roof. He did put some caulking around a vent and said he would have an estimate for the rest of the work that is needed by Friday the 16th. I still have not received the estimate. I think $149. for 45 minutes of work and a little caulking is ridiculous.

Description of Work
It took nearly a month to get the Service Provider out to the house to get an estimate.

Sierra Vista Maintenance is a family-owned and operated business that specializes in customer service, attention to detail, and the highest quality of work. We stand behind our work 100%. As an experienced cleaning service, customer satisfaction is our top priority. Our trained and professional staff will perform the highest quality work at an affordable cost. All power washing is performed by highly trained and efficient staff. All roof, gutter, and downspout cleaning will be performed with the highest level of safety and precision. Our staff will provide before and after pictures of every cleaning. Our window cleaning professionals are courteous, prompt, and streak-free, wearing shoe covers and using drop cloths as they leave your windows sparkling. We have worked hard to be very highly rated by our customers and we highly value our customers. Our power washing services include an exterior home wash, patios, driveways, walkways, lawn furniture, gazebos, and much more. Our window washing services include both interior and exterior, vacuuming and cleaning tracks, wiping down frames, and washing screens. We also clean skylights and solar panels. Our gutter cleaning services include removing loose debris from the roof, cleaning gutters, clearing downspouts, and cleaning up any mess that we make. We service El Dorado Hills Ca, Folsom Ca, and the Sacramento area.  …

How is Freeman Roofing overall rated?

Freeman Roofing is currently rated 4.5 overall out of 5.

What days are Freeman Roofing open?

Are warranties offered by Freeman Roofing?

What services does Freeman Roofing offer?