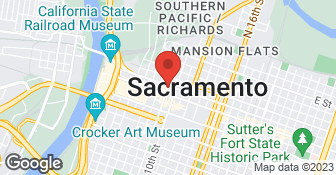 HANDYMAN HOME & BUSINESS I am owner and do all work. ST FRANCIS HIGH SCHOOL PARENT & GRANDPARENT TEXT 916.531.1756 Call & ask if I do it. If I can not do your job, I will refer someone who can. 30 years in business

Steve was very experienced and professional. He did great work, on time, at a great price, right on time. He offered expert input to make sure we got the outcomes we wanted.

Description of Work
We needed two locking knobs and one deadbolt lock replaced, plus a locking metal screen door removed.

Steve was prompt and did an expert, thorough job. Fairly priced and I would use him again. Highly recommend.

I called them to have my screen door lock fixed. It was stuck and wouldn't let me unlock or lock it. He came out and looked at the screen door lock saying he had locks with him he could replace my lock with. He did replace the lock and left. I realized after he left that the one he replaced does not lock. He said he would send me an invoice, but did not, so I called him three time telling him my lock doesn't work. He has not responded. I do not think that is very good service to take my money when the lock doesn't work and then to not respond to me. He showed unexpectedly yesterday (10/24/2018) and resolved the problem.

Wonderful! Steve was unbelievable prompt, professional and reasonable. I am thrilled to have a handyman I can trust completely!

Description of Work
my french doors were falling off hinges

Steve did a great job of letting me know his availability. He's easy to talk to, knows what he's doing, and does a great job. I'll definitely be calling him again to help us out. The shelf was large, and we couldn't figure out how it was attached to the wall (old house, sometimes people do weird things to them). He worked hard to do minimal damage, and cleaned up afterwards. I would highly recommend.

He was able to fix a major leak in the front sprinkler valve and identied a secondary leak, and will return later with parts to fix. Completely replaced the leaky parts.

It went great. The alarm system was old and malfunctioning and I hadn't used it for years. It was chiming due to dead battery and no landline connection. He was able to disconnect the internal power wires. He was very professional.

Steve was great. The problem wasn’t with the lock at all but rather with the hinges on both doors as I have an old house with old doors. He knew this right away from my description over the phone, though still did a thoughtful assessment in person. He was really knowledgeable and friendly. I could tell he has a lot of experience.

Description of Work
I had a gate that wouldn’t open and a door to my house that also wouldn’t open or lock properly. I had already had a locksmith out to fix the gate once as I thought it was a problem with the lock.

Spoke with him on the phone and he asked that I send him an email with detailed information on work needed and he would provide a quote. I sent the email with requested information as well as sent a follow up text letting him know that email was sent. Waited a week with no response and texted 2 more times over the next 2 weeks. Received no response to texts or email.

Great! Very responsive, on time, did good work and friendly as well. Already have other projects lined up for him to do.

Steve did an excellent job with the removal and replacement of the fixtures!! Superior!

Perfect! It was a professional job!

Description of Work
Hanging an oversized Whiteboard in the office

Steve can out fixed the problem and made some suggestions on other issues around the house. For the time Steve spent and helpful suggestions the price was very reasonable. Steve was very honest, things he thought were too much for him he said so and made suggestions.

Description of Work
Leaking under the sink, sprinkler system, cracks in stucco and crawl space issues.

Steve came over promptly and diagnosed the problems. He was able to fix them quickly and at a reasonable price.

Description of Work
One door needs aligning deadbolt and another had trouble with latching when closing.

Steve showed up totally prepared..He fixed the door that was broken by a burglar--looks and works great...In the hot sun, then retrofitted and put on a new security screen door, including the new locks...He also gave me some good prevention suggestions that I am going to take him up on....Steve was fun to work with, very outgoing and very personable....He is a GEM...

Steve was very nice and responsive when I first contacted him, but things DID NOT GO WELL after that. He spent A DAY AND A HALF completing this really minor job, and charged us $630. Totally took advantage of us. We have a baby on the way and are trying to keep costs minimal, so this was a hit. Notably, he had come over and assessed the job in advance, so he should have been prepared to complete it in just a few hours. When I came home from work and my husband told me he had spent all day at the house and still wasn't finished, was coming back AGAIN tomorrow, I knew something was wrong and texted Steve asking him to tell me what he was going to charge us for the first day. He responded by describing the work he had done thus far but did not answer my question, which was really sketchy. His invoice after the second day did not include the amount of hours we were charged for or the hourly rate. He charged us $140 for materials without specifying what they were. I can't think of any materials other than some joint compound and the texturing material, which should not have cost this much. We actually had a whole jar of joint compound sitting right there in the room that he could have used. At MOST, this job should've taken 3-4 hours, at $50 an hour tops (I'm being generous here), that $200, plus maybe minimal cost of materials. INSTEAD HE BUMBLED AROUND FOR OVER A WHOLE DAY AND CHARGED US THREE TIMES THIS AMOUNT. DO NOT HIRE. This person is not trustworthy. And the quality of the work was mediocre.

Description of Work
I asked Steve to prep a very small reach-in closet space where I was going to install some cabinetry. This involved patching a couple small holes in the drywall, texturing the upper half of the inside of the closet, and gluing down a couple pieces of laminate flooring we provided to level the floor for the cabinets to sit on. I also asked him to do some texturing around the window in the same room, just a few inches around the windowsill.

Steve was able to repair the lock with a replacement part, without me having to purchase a new lockset. Good solution.

Steve responded immediately and came over that afternoon to help me out. He was able to modify the window frame with minimal damage and I should be able to patch it back together versus having to replace it and/or have the entire thing rebuilt.

Description of Work
I had a very small project where I needed some assistance modifying a window frame so that I could get my washer and dryer out of a tight space.

Steve was very responsive to the work I needed performed. He was thorough, informative and did very good work. I would recommend him to anyone needing the work of a handyman.

Steve looked at the door for a few minutes, diagnosed the problem and fixed the door.

Description of Work
I had a door that would not close.

He called me very prompt and had me text info to him. Told me he would get back to me. That was on Tuesday 1/17. I have heard nothing back and did text him the next day for follow up. Still nothing. I would not recommend him. He could have at least texted or called me back for a reason why he could not help me out.

Steve was very responsive, professional, and friendly. He arrived on very short notice and had the work done quickly, even was able to help us figure out why the ice maker stopped working. We already have other work planned for him so definitely plan on hiring him again!

Description of Work
We had a 6' x 4' whiteboard and a smaller whiteboard that needed hanging, and while he was in our office, our ice maker stopped working.

It was one of Angie's List specials. We might have had him do a couple of other little things around the house, the main thing was the lighting. I think I got two hours for $90 or something like that. The price was excellent. I'm contemplating another project and that's how I remember his name because I looked it back up a few weeks ago, just looking at a project in 2017. He was punctual, he was professional, he did a good job, in and out and he cleaned up.

Description of Work
He did some exterior light work for me, put up some new lights on the outside.

I was very impressed with Steve. He was very responsive, cordial and looked for ways to reduce the cost and time of the repair.

Description of Work
Steve Albert repaired my attic ladder, which had snapped off at its base. Steve's ingenuity helped repair the ladder rather than having too purchase a new ladder and dismantle and haul away the old one.

Turns out I am going to need a new one to replace my 20+ year old one. Will have them do it when I'm ready.

How is Curb Appeal overall rated?

Curb Appeal is currently rated 4.7 overall out of 5.

What days are Curb Appeal open?

No, Curb Appeal does not offer eco-friendly accreditations.

No, Curb Appeal does not offer a senior discount.

Are warranties offered by Curb Appeal?

What services does Curb Appeal offer?