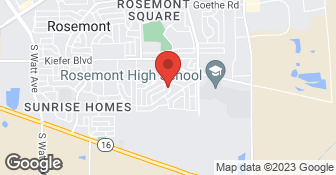 Never got a reply. Left an email from Angie's list and never had anyone even acknowledge email. Don't advertise if you cannot do something as simple as emailing a potential customer back. Horrible

Description of Work
None performed

I hired Michael in late December to install my countertops. I had originally given him good ratings on Angies list because he was on time, efficient and reasonably priced. My issue now is with follow up. The piping to the sink started to leak and the caulking around the sink is starting to come apart. Now i understand that sometimes things like this are unavoidable and i do not blame Better Home Repair for it. But when i called to have them come out to take a look at it, i got no response. I left a number of messages on their voicemail, as well as one with a young lady, and got NO response. I wanted to hire them to do my laminate flooring, but i think i'll be looking else where.

Description of Work
No service

I called with a request for a minor repair (reseat sink trim, repair faucet leak) on 1/28/10. We set up a 3pm service on 1/29. Chelsea called back a few minutes later to say that she'd made an error, and the 3pm time wasn't available. We agreed on 4pm, with the understanding that he might get there earlier. Because of time commitments on my end, I asked to be contacted if there were any delays on their end (knowing that that was always a possibility). The service technician called on 1/29 (not sure what time), saying that he'd been delayed and wouldn't make it by 4. We agreed that he would come by on 2/1 at 8am; since the time constraint on 1/29 was on my end, this was acceptable. On 2/1, 8am came and went. I started calling Chelsea after 9am, requesting a call back and advising that I hadn't heard anything. The third call (after no responses) was a little after 10am, two hours past the agreed-upon service call time. I cancelled my request for their services.

Description of Work
No services were performed.

They were on time and prompt. If there were any questions or if they were a delay I always got a phone call from them, letting me know what was going on. They were quick, efficient and got the job done in lesser time than they had anticipated. I told them that I wanted the work to be done before Christmas and they did everything they could to make sure that it was done before Christmas.

Description of Work
They installed countertop, garbage disposal and sink and faucet.

The work was performed very well. We were pleased with the outcome. It may have been pricey but we wanted the work done that day. Attention to detail slipped a little. (Light switch plate not put on and left work rug at house)

Made intial contact through email. Michael came out, on time, and gave me a price which was $150 less then the other contractor. He was able to do the job within the week. He did the work in a quiet and efficent manner and didn't try to upsell me which was really nice. All in all a really good company, timely clean and efficent. Will use them again

Description of Work
They installed a bathroom fan which vented through the roof, they also installed a ceiling fan and switch in my living room

I was very pleased. He arrived when he said he would, cleaned up and took the empty boxes with him. They were very good, I would call them again and recommend them.

Description of Work
He installed a shower door.

made initial contact by email; scheduled an estimate appointment; scheduled work by email; son of contractor did the estimate and most of the work. Work was done over three days and was completed as agreed. Had only telephone contact with the contractor who called to let me know son would be late on day three. He also asked about my satisfaction level during this call. Agreed work was done satisfactorily but the some things, like cleanup, protective steps for floors, rugs, fixtures were not a priorty.

Extremely professional with prompt service. They checked the entire fence for problems and replaced an additional panel that had a rotted post. I would definitely use again.

Description of Work
Replaced several fence panels that blew down during a storm.

They never showed. They called the next day and said that they got in a car wreck.

Description of Work
I had appointments set up with them.

ON THE DAY OF THE CLIENT'S APPOINTMENT, MY TECHNICIAN WAS INVOLVED IN A TRAFFIC ACCIDENT WITH A HIT AND RUN DRIVER. ACCIDENTS ARE A PART OF EVERYONE'S LIFE AT SOMETIME OR ANOTHER, AND OUR FIRST CONCERN WAS FOR THE WELL-BEING OF OUR STAFF MEMBER. I TRIED TO RE-SCHEDULE THE ESTIMATE APPOINTMENT WITH THE CUSTOMER, BUT WAS UNABLE TO MEET WITH HER,AS HER WINDOW OF AVAILABILITY AT HER RENTAL PROPERTY HAD EXPIRED. WE ALWAYS REGRET THE LOSS OF EVEN ONE CUSTOMER. WE BELIEVE STRONGLY THAT EVERY POTENTIAL CUSTOMER'S TIME IS VALUABLE.
5.0

Jason provided an estimate for the different projects. Jason and Roy showed up to do the job. They made suggestions on how the work should be accomplished - which was very helpful. They went straight to work and did an outstanding job. Jason kept me informed on how, and when, he was to accomplish each task. They were both extremely cooperative and went above and beyond what I would have expected to ensure the job was done in very satisfactory manner. It was a real pleasure to work with these two fellas and we couldn't be more pleased with the results.

He was a very nice guy and he came back when he said he would. He was very punctual and did the job very quickly and efficiently. The experience was great.

Description of Work
The guy came out and did a free estimate. I had leakage and water damage on my ceiling from a blown hot water heater. He scraped off the stuff, put on new plaster. He managed to match the contours of the ceiling. He sanded and painted.

Work was performed by Jacob, he was professional, courteous, reasonable, built the handrail from "scratch" out of redwood boards, it looks great, and I will hire him again. BHR is a family owned business, a licensed, building maintenance and repair specialists with 25 years in the business.

Description of Work
Constructed a redwood hand railing on my front porch.

He was so good. I will use him for other things. Better than any handyman I've ever used. On time, professional, reasonable, did the job and did excellent work and is very friendly and nice and polite.

Description of Work
Repaired a fence.

They were on time and neatly dressed. Three gentlemen came to my house when they said they were going to and went right to work after a brief introduction. They split off and each person did a specific job. There was not a lot of talking between them, they just worked. The fan and shower valve are pretty standard but the drywall patch was amazing. After they were finished, I would not have been able to tell where the patch was at, had I not known. They finished the job in a timely matter and when it was complete they charged me exactly what they said they were going to, no hidden fees.

Description of Work
They replaced a leaking shower valve in my bathroom as well as a ceiling fan. They also patched a hole in the drywall and textured it to match the wall.

We here at Woo Brothers Electric Inc. pride ourselves on doing the right job for the right price. We are staffed with several certified electricians, and some have accomplished there Master Electrician certificate as well. We do everything from small repairs to large commercial buildings, with an additional focus on service work. In addition to our C-10 electrical license we are certified as general contractors so whether your project is big or small Woo Brothers Electric can do it all!  …

Better Home Repair Inc is currently rated 4.5 overall out of 5.

No, Better Home Repair Inc does not offer a senior discount.

No, Better Home Repair Inc does not offer warranties.