With Angi since November 2017 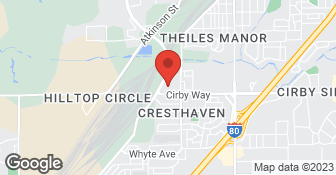 Description of Work
He did new siding, they replaced the garage door They installed 5 doors, they renovate my bathroom and works in my second bathroom.

I scheduled an appointment for 11am on my day off and rescheduled a doctors appointment to make sure I was available. Convex never showed up or called to say they weren’t coming. I called them and they said they thought I had canceled my appointment, which I didn’t. They rescheduled me for the same day at 430pm for an estimate and again they never showed up or called. I called them to see if they were showing up and there was no answer. Not sure how this company got an A rating on Angie’s List. Complete waste of my daI will never get back. FYI I used Garner and they came out almost immediately.

Met with rep for quote, spent 90 minutes and he barely looked at the house. He asked what other quotes i had received and said he could match them. When he left, he said he would send us a quote in 24-48 hours. I had to call him 4 days later to get our quote which was no where near matching the other quotes we had. I will not consider this company for any of the other work I need done on my house based on this experience.

This company hires sub-contractors for their work and the quality of their work is poor. The gutter screens weren't installed correctly by the sub-contractors so they had to take everything off and re-attach them. Gutter connector broke so rain water was running off the side of the house so they came out to fix that. I would never hire this company for any work anymore.

Good workmanship and good responses to job details that was missed. Need one single person contact throughout, we had to work with three. Need more careful and thorough inspection of completing the entire job. Best by one single person overseeing the entire project. Some disconnect between the saleperson and the project managers. Problem: The power and phone lines were not reinstalled and left hanging over the shrubs. Your strength is your workers they were very skillful and responsive and left the place.

We did not choose to hire Cobex for our siding replacement due to our experience for the following reasons: 1. The salesmen would not continue our bid meeting without my husband present, so I was forced to reschedule. 2. During the rescheduled meeting they were unprepared - They did not have any product examples to show us, instead, they brought a sample of a product that they no longer use. - While one person spoke, the other person stared around our house, focusing his attention on our family room - They did not have a bid ready for our meeting but argued on who had the bid. Not having one prepared, they hand-wrote one on the spot. - They did not list the work that was going to be done on the bid, nor the cost of each action item but gave a grand total and the monthly installments. Then asked if we were surprised because their cost was so low. (This bid was $20-23,000 more than our other bids) - They incorrectly measured the total square footage of our home, increasing the amount by almost 600 feet. When questioned on the size, one of the salesmen shrugged his shoulders and did not respond. - When asked if they had local examples of their siding jobs, one of the salesmen stated they have jobs completed in El Dorado Hills and proceeded to show us pictures of new construction that was still in the framing stage. They had no photos of siding work they have completed, nor a list of addresses we could see. - When we indicated we no longer had any questions and thanked them for their time, one of the salesmen continued to push if we wanted to pay cash for the job.

Description of Work
Putting screen door in the front.

I was very impressed with my mother's roofing job - she has a Streng home - very snazzy architectural design but they have roofs with very little angle so they won't take shingles - they used a roof liner (like commercial properties with flat roofs use) and I was very impressed with their work. Because of their work on my mother's roof I hired them to replace my gutters (I had one area where there was a little waterfall every time it rained hard). They were not inexpensive but they did excellent work and used high quality materials so I think it was worth it. I would recommend them to anyone looking for work on their house.

The repair went so smooth. The men who did the repair in the front of my house were so professional and wasted no time in getting the job done. They have so many people who are so knowledgeable in all facets of home repair you get a top notch group who know what needs to be done and how to do it. The roofers were also fast and efficient. The painters make sure they have covered all spots with the exact same color you had in the beginning. They have an "eagle eye" who comes by and rechecks everything to make certain you are happy with their work. I was!

COBEX CONSTRUCTION GROUP, exceeded our expectations. So professional and excellent quality work. I would recommend them to anyone looking for top quality work at a great price.

Description of Work
New roof on our home

We are so happy we chose Cobex to do our remodel. We saw the recommendation for them on NextDoor and excellent reviews on Yelp, and they are living up to their glowing recommendations. Dimitri and Dave pay close attention to details and let nothing fall between the cracks. Their workers are a testament to the quality they provide their customers...they all work so hard and through it all are friendly yet professional.

I am very happy with the work done by Cobex and would definitely use them again, as well as refer others to them. They built me a 12' x 45' redwood deck that was permitted and inspected. They also poured concrete for a patio, walkway and custom stepping stones. I dealt with Dmitry and he and his crew were exceptional. On time every morning, clean up of the work site every night, and true craftsmen who took pride in their workmanship and genuinely cared about pleasing the customer. That kind of service and craftsmanship is hard to find these days. The Cobex crew was top notch!

We needed new windows that were more energy efficient. We had Cobex come in and install new windows throughout our house. We also had our duct work redone and new duct work installed in our attic. Now our home is actually warm during the winter and our heater doesn't need to be blasted anymore! The windows look great and we had no problems with our strict HOA approving anything. Thank you so much Cobex for taking care of everything for us.

Still working on it. I did not use this company.

Hi [Member Name Removed], we do not have you in our database, did we ever get in contact with you or meet with you?
5.0

Cobex offered great value for my money. Their price was around the same as other quotes, but they used better materials. In addition, Vaz patiently answered all my questions and gave me prons and cons of the different upgrade options. We ended up also using Cobex for attic insulation and gutter guards. The true sign of professionalism is how a company reacts when issues come up. We had a couple of minor issues from the construction that Cobex addressed quickly. I also like how they handle everything electronically. No more printing, singing, scanning, and emailing documents back. We've had lots of compliments on our roof. We would totally use them again.

Description of Work
Extremely happy with my new roof

Quick and high quality. They kept me informed throughout the process. The price was very good!

They were fantastic to work with. Very professional, neat and clean, on time, and hard workers. True craftsmen who took pride in their work and really wanted the customer to be happy. I would definitely use them again! I love my new deck! Price was what I expected to have to pay.

Description of Work
They built a new 12'x45' redwood deck and did some concrete work (patio, walkway and stepping stones).

The Cobex team provided amazing exterior paintwork and repairs to the imperfect-smooth exterior finish of our two-story home in El Dorado Hills. We used the Cool Wall products, and we're looking forward to a reduction in heat and improved insulation qualities. The preparation work, the COBEX team, provided was meticulous to get everything that was loose off of the 18-year original finish. The crew expertly masked off the gutters, fascia, windows, surrounding exposed patio, stonework and covered the plantings and exposed concrete with drop cloths. The team expertly patched the imperfect-smooth stucco, primed, sealed the windows and door frames and applied a final finish over a period of 8 days. The Cobex crew were neat, protected all of the plantings around the house and did a great clean up at the end. I watched their progress every day, and I was impressed with their work ethic and progress. They were focused, conscientious and provided a great finished product. Our home looks amazing. Our thanks to the COBEX team for another amazing project completed.

Description of Work
Complete refinish of an 18 yr old exterior finish on a two story home with and imperfect-smooth stucco finish.

Excellent. Very pleased with their work.

They did really good work. True to his word.

Description of Work
They put on a new roof on our house and painted exterior.

It went very well, the work was all done within the three day estimated time. When completed the entire area was well cleaned up. So far everyone who has seen the work has been impressed by the new look.

Excellent workmanship. We converted a part of our garage into a playroom. (Carpet, texture, paint, Sheetrock, electrical outlets, put in 2 windows, cabinets, etc). Everything a room would need. Halfway through the project my wife decided to make changes and add additional things. Dmitry and Alex had no problem with the new changes, even though it made extra work for them. Room looks amazing, we love it. Would certainly use them again.

Description of Work
Convert part of garage into playroom

We contacted a number of companies and got a good number of estimates. Out of all of this, we found none better that Cobex. For the workmanship, the attention to detail, the customer service, the professionalism, the quality of the result and for the price. It was all done the right way, the first time! For any of our future projects, first we will call Cobex.

It turned out beautifully. Everything was great - from the work to the customer service!

Description of Work
They did a partial remodel on our bathroom. They removed a stall shower and a garden tub and replaced it with a gorgeous tile shower.

We are a family run business. Our company is committed to creativity, quality, and service. We take pride in all our work and strive to provide beautiful, functional landscapes. Through effective management, proper communication and long-term relationships with our clients. We provide full landscape construction including all types of concrete, pavers, artificial turf, retaining walls, fire pits, fence, etc.  …

Cobex Construction Group is currently rated 4.8 overall out of 5.