ALL IN ONE PEST CONTROL 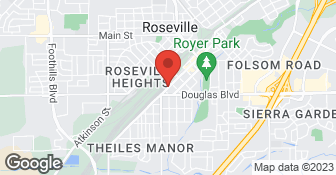 I do not Recommend All In One Pest control. They said they would clean up un under my house and it turned out the fine print said they would only cleanup rakeable cellulose. That was not a good use of $750.00. Very dissatisfied will never use again. I expected them to actually clean up under the hose they did not meet expectations and had many excuses. See pictures of the mess they did not clean up.

I ordered bi-monthly service in March. After giving all necessary information to begin service in April I inquired about making automatic payments. The company does this so I provided all the necessary credit card information. The technician sprayed on Tuesday, April 22, as scheduled and was quite friendly and knowledgeable. I figured then this was going to be a long relationship. About May 1 I received a statement of charges in the mail and immediately called the office. I explained when I began service that charges would automatically be charged to my credit card. Whoever I spoke to said there is no record of it and that she would have to research it and would call me back regardless of what was or wasn't found. I never got a call so I assumed everything was okay. Wrong! On June 1 I received a second statement with an additional late charge tacked on. On June 3 I called again, said I wanted to clear up my bill and provided my credit card. After this transaction was completed the employee told me when my next service was scheduled. I let her know in no uncertain terms there will NOT be another service, that I no longer wish to deal with them and explained why. You can burn me once but you won't get a second chance. I don't like doing business with incompetent people. UPDATE: On July 2 I received another invoice, this time for an additional late charge making the total $76.00. I didn't feel I should have paid the first late charge but I did and I cancelled all future service. I paid $72.50 on June 5 with a phone call. They gladly accepted my credit card number and processed the transaction and it appears on my credit card statement. I would not recommend this company to my worst enemy. They are totally incompetent.

Description of Work
Service technician sprayed for insects around house, sheds and yard. He was fine, it's the office staff that has left me fuming. UPDATE: Update to previous post of June 3, 2012.

Our Customer's satisfaction is our top priority! As a Family Owned and operated company that has been in business for over 25 years, we truly care about our Clients and work diligently to achieve their satisfaction. For this very reason we have many Clients that have used our services for 20 plus years. Although we put procedures and training in place to prevent mistakes from being made, as humans from time to time we still make mistakes. However when errors are made, new procedures are put into place to eliminate the error from occurring again in the future. In the case of [members name] our office made an error when setting up his account and did not set up his credit card to be charged for the service we did for him. When [members name] called to inform us he had received a bill, we sincerely apologized for the error and tried to rectify the error. [Members name] was unwilling to give our company another opportunity to make the matter right with him. Although we always hope we are able to satisfy our Customers we respected his decision to no longer use us. Because we value [members name] satisfaction more than money, we credited him for the service in an effort to show how much we care and value his satisfaction.
5.0

All In One Pest Control comes to our house once every 2 months and in between if I find any ants have broken through the barrier, which happens once in a while if there is a lot of rain. They are very responsive, thorough, and very nice staff.

Description of Work
I've been using All in One Pest Control for about 3 years now. They call ahead of time to ask if I'm having any additional problems or need any additional services performed on the upcoming visit. The service is excellent. The office staff is very kind and helpful; and the service (sprayer) that performs the service is thorough, he answers my questions and is very nice. My husband and I are very satisfied with All-in-one Pest Control.

They are actually contracted with my apartment complex but I've used them at my resident prior to that. Usually their average is a little over $30 a month and they have different programs month to month so I'm not locked into a contract. They are very friendly and very dependable. They are super nice.

Description of Work
I used All In One Pest Control for pest control services.

I was really happy with their service. I liked that they were willing to offer payment plans. My lawn never looked so good as when I was doing business with them.

Description of Work
I hired All In One Pest Control for my pest maintenance. I spent about $45.00 a month.

We switched our pest service from Clark's Pest Control to All-In-One Pest Control. All-In-One provides more complete service at a better price. We also contracted with them to do our other home in Orangevale.

Description of Work
Sprays lawn, bushes, shrubs, and our fence too. Service is excellent and treatment works keeping pests out.

I was first impressed with my call for information. Jen gave me a lot of useful information about solving the rodent problem,. After calling a few other companies, I realized that All In One was not overselling or overcharging for what I needed. The technician was prompt and extremely pleasant. Again, I got more help and information than I could have hoped for. Competent service with INTEGRITY. He put to rest concerns I had and gave me suggestions for minimizing the problem. Anyone researching a pest need should talk with this company and compare notes. They're now on my rolodex and referral list.mel

Description of Work
My tenants complained of rats in the yard, garage and possibly attic. The technician called ahead as I requested and arriived timely. He surveyed the property and made suggestions about what I could do to minimize the problem. He also told me other things I was concerned about were not issues. He set two traps and. advised that I could bring them to the shop in six weeks to be re-set for a nominal fee or have the company provide the service.

They did the work satisfactorily until one time when I wasn't home. Then they just left a bill to indicate they had been to my house and performed the work. Soon our house was crawling with bugs. I called to have them come out and spray inside and out, and discontinued further work with them. They charged $71.50 every 2 months.

Description of Work
Provided pest control spraying every other month around my house.

THEY ARE ALWAYS ON TIME. THEY GET RIGHT TO BUSINESS WHEN THEY ARRIVE. THEY DO THEIR WORK AND THEN THEY ARE GONE. THEY KEEP ALL OF THE PESTS AWAY FROM OUR HOUSE.

Description of Work
THEY SPRAY OUR HOUSE FOR PESTS.

THEY CAME AND INSPECTED MY HOUSE ON THE INSIDE. HE FOUND SOME EXTERIOR WORK TO BE DONE, BUT IT WILL BE TAKEN CARE OF BY HOA. IT WAS QUICK AND TO THE POINT.

Description of Work
I NEEDED A PEST INSPECTION FOR MY CONDO. I AM SELLING MY CONDO, AND I NEEDED A IN-DEPTH LOOK AT WHAT I NEEDED TO FIX.

At EcoTech Pest Management Inc. we strive to give quality service at a reasonable price. We have extensive experience and knowledge in Commercial, Residential, and Agricultural pest control. We continue to work hard to stay up to date on new effective technologies and treatment methods in the industry. We have extensive experience in servicing and implementing a LEED certification Integrated Pest Management Program (IPM Program) for our commercial customers. Ecotech Pest Management Inc. is committed to doing whatever it takes to provide the best service possible to each and every one of our customers. We offer a broad range of quality services for our customers to choose from, making us the only company you need to solve all of your pest problems. Our home base office is in Sacramento County, but we also service Placer County, Yolo County, and San Joaquin County. Over 20 Years experience in the industry. We are an all inclusive pest control company. Additional contact name - Kyle Abrahamson.  …

We specialize in maintaining your landscape. #Mowing #Blowing #Edging #Trimming #Pruning #Weed Control #Fertilizing #Sprinkler Repair #Clean Ups We guarantee your satisfaction and we won’t leave until the job is done right. We pride ourselves on the quality work we provide, while delivering great customer service! Check out our services offered and call or click to schedule a free estimate today!  …

The services we provide include Trapping and Removal, Gassing, and Exclusion (Abatement) for Skunks, Raccoons, Opossums, Ground Squirrels, Rats, Mice, Voles, Moles and Pocket Gophers. We prefer and choose not to use poisons as there are risks to using that solution to control a nuisance animal or rodent infestation problem. Namely, the risks to children and the secondary poisoning of pets, livestock, or 'good' animals and reptiles, such as Foxes, Hawks, and Snakes. We strive to be in constant communication with our customers until the job is done. For estimates or questions on our wildlife control services, please contact us at your convenience.  …

Frequently Asked Questions & Answers about ALL IN ONE PEST CONTROL

How is ALL IN ONE PEST CONTROL overall rated?

ALL IN ONE PEST CONTROL is currently rated 3.9 overall out of 5.

What days are ALL IN ONE PEST CONTROL open?

ALL IN ONE PEST CONTROL is open:

What payment options does ALL IN ONE PEST CONTROL provide

Does ALL IN ONE PEST CONTROL offer free estimates?

Yes, ALL IN ONE PEST CONTROL offers free project estimates.

Does ALL IN ONE PEST CONTROL offer eco-friendly accreditations?

Yes, ALL IN ONE PEST CONTROL offers eco-friendly accreditations.

Does ALL IN ONE PEST CONTROL offer a senior discount?

No, ALL IN ONE PEST CONTROL does not offer a senior discount.

Does ALL IN ONE PEST CONTROL offer emergency services?

Yes, ALL IN ONE PEST CONTROL offers emergency services.

Are warranties offered by ALL IN ONE PEST CONTROL?

No, ALL IN ONE PEST CONTROL does not offer warranties.

What services does ALL IN ONE PEST CONTROL offer?