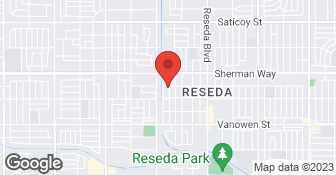 It didn't. When I refused his bait and switch scam, he got angry and pulled the crew from the job. I scrambled to find another mover and the job was successfully completed by an honest and reputable company.

Description of Work
Ted Cotter, the owner of this business came to my home one month before my planned move. He wrote and signed a contract that the cost would not exceed a specified amount. Two days prior to the move I phoned to confirm our appointment and to advise him that one of the two elevators in my building was out of order. He told me not to worry about it, On the morning of the move he pulled a bait and switch. He refused to honor the contact unless I agreed to pay an hourly rate. When I refused, he pulled the crew and I was left stranded. I have reported him to the Better Business Bureau.

We contacted inside moves based on an article in a newspaper write-up and later saw that his Facebook Page was pandering for others to vote for him. I reviewed him on Angie's List and was concerned by the review and lack of reviews. He quoted us twice the amount of what the move actually ended up costing us by going with someone else which exceeded our expectations. He later called two days before our actual move to see if we were going to use his services. When my husband informed him we were going with someone else, he replied, "Good luck with that! " and he hung up. Very rude in nature and rubbed us the wrong way where I felt it was worth my time to write this review.

Description of Work
Quoted us

Amazing.....I think I dodged a serious bullet here. I would think you would have to use my service to rate it? Not just be unhappy with how I respond to your taking your business else where. Very surprised you felt the need to drive customers away from me, I hope you took equal time to put a good review for the company that you liked and used. We can't make everyone happy but we try our best, some people you can't make happy. Please see our other reviews and call me and judge for yourselves. Do you ever wonder how people get so many good reviews? You need to be a good company and have a good review program. I get calls everyday from satisfied customers yet to ask them to post is near impossible. We are a small shop, but can handle all size moves every day, we didn't make this customer happy but didn't cause him the harm. He's has no problem posting remarks with every intention of causing our company damage.
3.0

Due to their very high rating in a local magazine I decided to call Inside Moves Relocation Service . We spoke about all the procedures and they provided a rough estimate. When they came to perform the work one employee was not as professional as the other. Furniture was damaged and chipped. It was not tightly wrapped as it should have been. The manager stated he would work with that employee and address the mishandling of my belongings. They took their time and addressed more work than needed. I had no idea how long they were working due to stress and working on other things. I did not need them for the extra work. They charged me for more than 8 hours. The time that was more than 8 hours they charged me a time and a half. I requested earlier that they leave and I handle the rest of the work but they kept working. We argued but we never negotiated a lower price. I later called to discuss the matter. I told him I think if he is going to charge a time and a half he should notify the customer prior to the 8 hours. This will allow the customer to shift priorities. He stated he will make sure to do that in the future.

Description of Work
Inside Moves Relocation Service moved me from my home to my mobile home. I did as much packing and boxing as I could but they also did some packing.

Was surprised to see this report surface a year later after the job was completed. We extended as many discounts as allowed and some, as well as provided excellent service. This customer needed to be packed up or contained to move, we saved her money using her boxes while we sorted what was moving and what wasn't into boxes. We did our best to please her, but you can't keep everyone happy. Please look at our other reports and see what 99% of our customers feel about us as well as all the testimonials on our website.
5.0

The move went beautifully! Toby and Danny did a wonderful job of carefully wrapping our furniture (including a player piano with stained glass), and everything arrived in perfect condition. In addition, they were extremely friendly, efficient in their work, and professional in every way. Moreover, their price came out less than they had originally estimated (and less than the competitions' estimates). Finally, the company's manager, Ted, was very flexible and understanding when I had to postpone our move a couple of times. I learned about "Inside Moves" through Angie's List, and I would absolutely hire them again for any future moves.

Description of Work
The move of a medium-sized storage space worth of furniture and belongings from Los Angeles to San Diego.

Very well. Based on a recommendation from another service provider, I asked Ted to come out to give an estimate. He was professional and knowledgeable, yet with an irreverent streak that we appreciated. He provided an estimate, which was right in the middle of the ones we had received. On the day, his crew of 5 arrived on time (even a little early) and ready to work. Toby, the leader of the team, delegated the work quickly and effectively. Not a minute wasted. And so went the loading, and then the unloading. Ted slightly underestimated the final cost, but his crew worked so efficently that I don't know how it could have been done faster given the task at hand. And so far, as we open the boxes post-move, nothing broken. I would use them again.

Description of Work
Inside Moves moved me out of my apartment and small storage unit in Glendale into my new home.

At Good Neighbors Moving, in Los Angeles, CA we value our customer's possessions. That is why we guarantee our services, so you can rest easy knowing your personal items are in the hands of professionals. Our moving company offers extremely affordable rates on our expedient moving and packing services. The easiest way to move in LA County. Moving so many families and businesses every year has prepared us for meeting virtually any moving challenge.  …

Bonded
Insured
All statements concerning insurance, licenses, and bonds are informational only, and are self-reported. Since insurance, licenses and bonds can expire and can be cancelled, homeowners should always check such information for themselves.To find more licensing information for your state, visit our Find Licensing Requirements page.
General Information
Free Estimates
Yes
Eco-Friendly Accreditations
No
Payment Options
Check, Visa, MasterCard, Discover
Emergency Service
Yes
Warranties
No

How is Inside Moves Relocation Service overall rated?

Inside Moves Relocation Service is currently rated 3.9 overall out of 5.

What days are Inside Moves Relocation Service open?

Inside Moves Relocation Service is open:

What payment options does Inside Moves Relocation Service provide

No, Inside Moves Relocation Service does not offer eco-friendly accreditations.

Are warranties offered by Inside Moves Relocation Service?

No, Inside Moves Relocation Service does not offer warranties.

What services does Inside Moves Relocation Service offer?