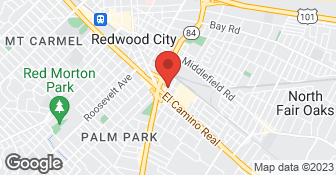 Locally owned small business. Owner has over 20 years of experience in the plumbing trade. We specialize in service calls and trenchless sewer replacements. Please give us a call today!...

We called Bullseye around 8:15 AM and were told a plumber would arrive between 9:00 and 11:00 am. Luis from Bullseye arrived well within the allotted time and replaced the gasket on the faucet which did the trick, then turned on the water again. He also fixed a leak at the faucet outside at the water main valve for the whole house with a slight turn of his wrench. The latter only took a few seconds, but it will save some water. Very thoughtful. Luis was extremely courteous, efficient, cleaned up all debris, and even gave me some advice on faucet types to consider when we replace it. Excellent service.

Description of Work
A bathroom faucet suddenly started streaming water and couldn't be turned off.

It went perfect. He was here for about 3 hours. They were very thorough, clean, and neat.

Description of Work
He cleaned out the main sewer line to my house and the sewer clean out that connects my house to 2 other houses.

Was on time. Did the work. Was knowledgeable and professional.

I was at UCSF with my daughter who was having a battery of medical tests, so my 16-year-old son and my (disabled) brother were there to let the plumbers in. As we were driving back home, I got a panicked call from my son, saying they had caused the toilet to overflow, filling the bathroom with sewage which was seeping out onto the hall carpet. Whereas most plumbers put on protective "booties" when going between clogged or messy sites, these folks were happy to track mud and sewage on my living room carpet. By the time I got home, they had pulled the toilet and had, allegedly, unclogged the drain. Apparently, they had not managed to unclog the 4" line from the clean-out, so they called another plumber to assist (and charged me for the time they spent waiting for him) and climbed onto the roof to access the 4" line through the vent (which is nearer the beginning of the drain system). It was while they were pumping water through the vent that the toilet exploded sewage (because the clog is in the YARD where there is a CLEAN-OUT). They showed me with their fancy camera where the "breaks" in the line were (there aren't any) and told me I needed $8000-worth of repairs to my backyard sewage line. They charged me for "vacuuming and removing dirty water from inside bathroom." Although the bathtub would drain and the toilet would flush, when they left, they were still very slow. A few days later, I was in the back yard and noticed they had left the cap off the clean-out pipe and the lid off the clean-out box. I can only imagine what fell in there as we had very heavy rains around that time. It is now January 19th and the bathtub is barfing sewage, again. I specifically joined Angie's list in order to find a REPUTABLE plumber, this time. There is a 90-day warranty for the service and it's less than 60 days after the "repair," but it simply isn't worth the risk to have them out to fix their mistakes.

Description of Work
Called a different plumber who was too busy to do the job, so he referred me to Bullseye. Our house is older and the 4" sewer line is touchy (there's a "dimple" in the line that tends to collect solids) and we have to have someone come out about every 6 months to 1 year to clean it out. It generally costs about $120. This has been the situation for as long as we've owned the house (since 1995). As is typical, the drains got slow and finally the bathtub wouldn't drain and the toilet clogged. Problem is always between the bathroom and the city sewer and I had a clean-out installed a few years ago so the toilet didn't have to be pulled every single time. The job should have been very straightforward.

I purchased a deal with them for $95 for 1 hour of plumbing services. They took the travel time to get here out of my hour, and then charged me an additional $120 for the work they did. They did not even fix the leak, as this is still a problem. I was not happy with their service.

I've used this service twice, and was pleased with both outcomes and the team's professionalism. They get there on time and get the job done. Plumbing in my house is a challenge, with some piping over 100 years old. The repiping for the washing machine had to be done in a tight crawl space in a tight time frame as a new furnace system was to be installed in the crawl space the next day. The crew came through for me, working late into the night as old pipes in the system continued to crumble, but all turned out well in the end.

He was supposed to come today but I already got the job resolved.

It went well. He did what he promised and left with the problems solved.

His work went well. Sometime after that, a day or so, I went to their website and found they were giving a 20% discount to new customers. I was not offered that.

Description of Work
,. Installed air gap, dishwasher valve. Had to move faucet to accommodate the air gap. Good work. He was innovative in solving the air gap problem.

We are a local small veteran owned business, We proudly serve Redwood City and surrounding areas. For quality plumbing services that you can count on, look to the plumbing professionals at Commando Plumbing. Their business began when a former Special Forces Officer with a background in plumbing decided to offer services to the local community after serving in the United States military. The business has given the team of expert plumbers a great opportunity to put their talent to work on a variety of projects in homes, businesses, and even newly constructed sites. When you call the Redwood City plumbers, you can count on a quick response time, reliable service, and honest pricing. Call now and ask about how you can receive a free estimate and discount on your next plumbing service.  …

If you need service after hours or on Sunday, please call 415-845-9199 directly for plumbing service. San Francisco Plumbers Welcome to Atlas Plumbing & Rooter, we are top-of-the-line plumbers providing both residential and commercial plumbing services. We understand that plumbing problems are often unexpected, so we are on call 24 hours, 7 days a week to assist in a wide range of plumbing emergencies. Committed to quality service and customer satisfaction, our dedicated team of professionals look forward to assist you - You'll be glad that you chose Atlas Plumbing & Rooter.  …

We do all residential service calls. We are provide service for construction plumbing projects, from small to big (from small kitchen remodels to installing all plumbing for a new home). We are also specialists in trenchless sewer replacements.

How is BULLSEYE PLUMBING overall rated?

BULLSEYE PLUMBING is currently rated 4 overall out of 5.

What days are BULLSEYE PLUMBING open?

No, BULLSEYE PLUMBING does not offer eco-friendly accreditations.

No, BULLSEYE PLUMBING does not offer a senior discount.

Are warranties offered by BULLSEYE PLUMBING?

What services does BULLSEYE PLUMBING offer?

BULLSEYE PLUMBING offers the following services: We do all residential service calls. We are provide service for construction plumbing projects, from small to big (from small kitchen remodels to installing all plumbing for a new home). We are also specialists in trenchless sewer replacements.