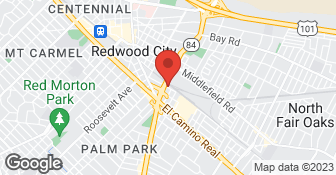 A&B Roofing, Inc. is a family owned and operated roofing company serving the San Francisco Peninsula since 1982. Our expertise in various types of roofing installations makes us one of the leading roofing contractors in the Bay Area. Our business success is due, in part, to the many satisfied customers who continue to do work with us over the years and who have recommended us to their family, friends and associates. Quality work and customer satisfaction are our priorities - give us a call and let us know how we can serve you. Additional phones - (650) 551-7030 & (650) 551-7029

The job required that not only the old roofing be pulled back, but that the undersheeting be opened (plywood be exposed to determine the extent of damage to the beams). They cut out the dryrot on the beams, bolted 2X12s on either side, replaced the bad plywood, put down new tar paper, seal with tar, tar the surface and gravel, and install new flashing, roof penetrations and downspouts. The price was quite reasonable. The workers were thorough and worked well. They did a very good job cleaning up.

Description of Work
They came out within a couple of days to give me an estimate on a leaking roof at my small office building. This was during a rainy session and getting anyone out was difficult. They started the job within a few days. Because my building houses mostly therapists I needed the work done on Friday and Saturday which they did.

They did an outstanding job. They started when they said they would and finished on time.shake

Description of Work
They replaced the tar and gravel roof on our cabana and pool equipment house. They also repaired and replaced wood shakes on our main houise.

. They are highly rated in the Consumer’s Checkbook. There are two types of roofing, the Formal roofing and the tar and gravel roofing. A & B ROOFING INC does the tar and gravel one. They are pretty good and I don’t see anything wrong with the quote but his prices are higher. So I may go with another company. I would consider them to give me quote in the future.

Description of Work
. I received an estimate from A & B ROOFING INC to do a tar and gravel roofing.

I called in and ask for service. I got price estimate right away along with how things would work (i.e., minimal charge, same day service or if I prefer estimate first). Within the same day, they call back and schedule to come in. I can't quite remember his name but he is a very nice guy. Very polite and considerate. He was able to identify the problem and fix the leaking roof the same day. It was quite a pleasant experience. He also refers me somebody who can fix my damaged ceiling as well.

I obtained two bids to remove and replace a tar and gravel roof over a 2 car garage and another section of the same house (an extra room). A and B Roofing had a slightly lower price so I went with them. When I first called A and B for an estimate, they had a man come out that same day, and they provided a very detailed written estimate. We had to wait for a stretch of good weather, so there was a bit of a delay in having the work done, but it was not a problem. A and B started the work on a Monday, but the day before starting they dropped off at the house a roll of plastic sheeting so I could cover everything in the garage prior to the removal of the old roof. A and B had a 10 man crew and they finished the job by Tuesday afternoon. It rained on Tuesday night. Talk about good timing. I am totally satisfied with the work A and B performed.

Description of Work
Replaced a tar and gravel roof.

Overall, it went just fine. I worked mostly with Steve Worthington, one of the owners, but occasionally with his son Ryan. I had composite shingles and replaced with composite shingles. The estimate appt. was one time, and Steve spent a good 20 minutes on the roof (I wasn't with him). The estimate seemed thorough. I got a total of three estimates. Steve's was the middle, but the three estimates were $12,000, $17,000, and $18,000 (in round numbers). The roof-removal crew showed up on time and were very easy to work with. We did move all plants away from the house since no matter how hard you try, roofing materials falls where you don't want it. There was a moderate number of plywood sheets that needed replacing as well as some rafters due to dry rot. I had the opportunity to inspect all this before any repair work was started. The gutters were done by a subcontractor. The only complaint I had is that some of the downspouts didn't reach the ground and stopped maybe a foot above the ground. I talked to Ryan, and he had to gutter guy come back out to fix it. It hasn't really rained so, I can't tell much about the new gutters, but they look to be good. The roof installation went fine as well. I asked for a new skylight, and that installation seemed to go well too. They didn't do the interior finishing carpentry. During the job, it did rain one evening, and Steve called to tell me a crew would be working over a Saturday to ensure the roof was watertight prior to the rain. No leaks that I know of. At one point some overhead lights in the kitchen stopped working. Ryan called out an electrician to check things since sometimes the roofing nails can short out wires. If finally seemed to end up being an intermittently bad bulb. Ryan went out and bought a box of four replacement bulbs. However, he charged me $70 for the electrician's visit. The job overall took longer than expected. That might have been due to dry rot, but it seemed to take about an extra week--about two weeks total. Not a problem for me but just different from the estimated time. Oddly, I wasn't notified when they were done--they just stopped showing up. I had to call Steve to double check it was all done. The clean-up at the end pretty good. There were scraps of roof felt and other miscellaneous bits and pieces I've been picking up for the last few weeks. They could have done more, but I think they did enough. I have a gravel driveway, and be warned that it's impossible to find all the nails in the gravel. I dragged a magnet across my driveway for about an hour one afternoon and pulled two good handfuls of nails up. I don't think this is their fault, but it's a warning. They requested only a 10% down payment and the remained at completion. They accepted $10,000 by credit card and the balance by check. The final bill was $21,000. The extra cost was nearly all due to the dry rot. I thought the communication was generally good. Both Steve and Ryan were responsive to my concerns and never raised any objections to requests I made. I asked a lot of questions, and they were not impatient about giving me thorough answers. The one place that seemed a bit rocky was about replacing some fascia board which I wanted to paint before it was installed since it was on a very high second-story peak, and I wouldn't have a good way to paint it once it was installed. Steve dropped off the unpainted (but primed) board one afternoon and left me a messaging saying I could paint it for installation the next day. I wanted to put on two coats of paint, and that just wasn't enough time. I asked for a delay, and it was willingly granted, but it just seemed an unreasonable expectation. A minor thing but the worst problem. I'd say if this was the worst problem, then things are going quite well. I have already recommended A & B Roofing to a friend living down the street.

Description of Work
Complete roof replacement and repair of dry rot exposed when the roof was removed. Replace all gutters and downspouts as well.

The bid provided by the owner of A&B Roofing was the lowest of four that we obtained. It stood out from the other three in its detailed scope and remarkable specificity. We were kept fully informed as the start of the project was delayed several times due to unseasonable rain and then as the project advanced. Without exception, the workers were cheerful and professional. They went above and beyond the necessary to make sure that the roof fulfills the ?Energy-Star? conditions that we stipulated.

We're glad to know you had such a good experience with us [member name removed], thank you for the opportunity to re-roof your home.

Attic Pros is your go-to attic insulation installation and rodent removal contractor in San Francisco Bay Area. We offer a wide range of services for rodent removal, attic cleaning, insulation replacement, and crawl space cleaning to meet all your needs. Our team is dedicated to providing you with the best possible customer service. Contact us today for a free estimate!  …

At Hi-Builders Group, our goal is to help homeowners bring their dream home to fruition. Our team offers personalized services to ensure that our clients are accommodated on every level. Our managers, client service experts, designers, and builders are topnotch industry professionals that pay strict attention to detail when servicing clients. Hi-Builders Group are committed to leading the maintenance and remodeling industry by providing services you can rely on, and pure client satisfaction. Our objective is for every homeowner to feel at ease throughout the entire process as we go above and beyond to obtain your stamp of approval.  …

Bonded
Insured
All statements concerning insurance, licenses, and bonds are informational only, and are self-reported. Since insurance, licenses and bonds can expire and can be cancelled, homeowners should always check such information for themselves.To find more licensing information for your state, visit our Find Licensing Requirements page.
General Information
Free Estimates
Yes
Eco-Friendly Accreditations
No
Payment Options
Check, Visa, MasterCard
Warranties
Yes

A&B Roofing Inc is currently rated 4.8 overall out of 5.

No, A&B Roofing Inc does not offer eco-friendly accreditations.

Are there any services A&B Roofing Inc does not offer?