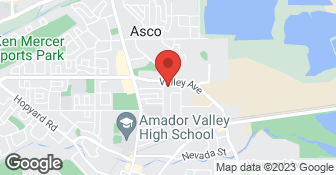 We are a full service residential Plumbing, Heating, Air Conditioning service and repair company that has been in business since 1979. . . I'm Steve Rivers, the owner, and I'm always available to help you and speak with you about the work you need done. I have California state contractor licenses in Plumbing, Warm Air heating and Air Conditioning, Electrical and Fire Sprinkler classifications. . . I am very involved with my trade association, the Plumbing Heating Cooling Contractors (PHCC), where I am a past California state president, a past Alameda-Contra Costa local president, the current National Association vice president, and a current Alameda-Contra Costa local board director. . . Our company has six employees and an A+ rating with the Better Business Bureau....

Kel-Aire is a family owned and operated HVAC company located in Rodeo, California. We have been in operation since 1973. We offer complete installation and service for all commercial and residential heating and air conditioning needs, as well as preventive maintenance to ensure your comfort. Our staff are highly trained, motivated professionals, people who you can trust.  …

It went very well. Luckily it was only tree roots in the drain between the house and the City's sewer drain. Last time we called on Rivers Plumbing to snake the drains was about 7 years ago.

We have used this company many times over the years and spent a lot of money with them and was always treated fairly and honestly. Guess times have changed the way some companies work. I was able to finally reach the owner Steve and discuss the bill and repair with him. Turns out that the "skilled plumber" he sent wasn't as skilled as we thought because part of the time he spent in the truck was finding out from the owner how to fix the problem. My two issues were the $300 repair estimate turning into being for only his less than an hour of work and not including the repair job requested. I fully understand hourly rates for the trades, but this was over the top. The explanation of the rate changed many times which raised more flags. A base rate of an hour to cut and cap the pipe (remember less than 30 min or actual time working) would be reasonable. Then I was told that there was an extra charge for having to go into a crawl space, and an another extra charge for getting coveralls dirty, and then about $50 for parts (parts - a compression fitting is $50? huh). I have never heard of anything so silly - time and materials is one thing, but paying an additional fee for doing their job? I was not happy and expressed my disappointment, that resulted in a $50 refund that turned into a discount on finishing the job. We can kiss that good-bye. Moving forward, I asked about how the repair would be done as I was not thrilled the the first guy's suggestion of just drilling a hole through the floor in the middle of the cabinet and stubbing it up there. To me, that is a stupid repair idea because if we replace the cabinets, we will have to deal with a water line where a water line should never be. Our lines are all copper, so according to him, the only professional way to repair was new copper and solder - "a pro doing the repair correctly would never use compression fittings with copper lines". I asked about other options - bendable copper, newer technologies, etc, and was told the only way to do it would be using copper and it would take 2 guys and it would be at least another $200-$600 or more to finish. I asked about the added costs (crawl space, getting dirty, etc) and got a vague response. He said that he felt his rates were fair and to do ahead and get other quotes. He said he'd said he'd talk to his plumber and have him call me to confirm the rates. He did call me - a tad p***** off- and said that his boss told him to tell me that it would be another $200-$600 or more to finish the job and that was the estimate and to call to schedule finishing the job. Well, we did get other estimates . Turns out there are at least 3 other ways to properly and professionally do the repair, and there is nothing in the code that requires existing copper lines to be only repaired by soldering. We got quotes that were reasonable and comprehensive and would be less if work completed faster than expected. The quotes are all from licensed professional plumbers. Sadly, had we called one of them instead, the repair would be completed for what we paid to have a cap put on a line. The real icing on the cake was learning that when muddy areas are an issue, most others simply roll out some plastic - easier to move around on and they stay clean. When I mentioned being charged extra for having to go into the crawl space and for getting dirty, let's just say the rolling of the eyes said it all. Well, River's Plumbing got the last cent they will ever get from us. Sad to see - they used to be a good company that did good work and was fair and reasonable.

Description of Work
We had a hot water leak under our kitchen sink in the wall and it had been going on for some time, but as it got worse it finally showed up (we have a crawl space under the house). We called our favorite plumber to have it stopped and repaired. The plumber they sent was on time, but sat in his truck for a while, then came in and looked at it and agreed we had a leak and he could feel it. The most important thing was to get it stopped asap and then repaired. He went outside and turned off the water and spent time in the truck again - guess he was getting tools and parts. He opened the crawl space and put on his coveralls all the while complaining about getting dirty, but it was the last job of the day, so he could deal with it. The repair that was discussed turned into simply capping the line and replace the bad section in a few days after things dried out. He cut the copper line and installed a compression cap (no soldering). He was at our location 1 hour and 19 minutes (as per their gps records) and actual time spent working on the problem (including crawl space time) was in the 30-40 minute range. Since we had discussed capping and finishing repair in a few days so he would not have to deal with mud under the house), The $300 bill was reasonable...... until he informed me that it was only for the work he had done that day and it would be another $200-$600 to finish it. I asked what happened to the original quote for the repair and didn't really get a response - other than this is the amount due now for the work he did. We had used this company many times in the past and all dealings with the owner proved him to be a reasonable, fair person, so instead of arguing paid it and said we wanted to talk to the owner for clarification as this is different from what we understood. Very disappointed with the plumber that did the work. Red flags were raised when he said he'd just drill a hole in the floor of the cabinet and stub it up from there. When I asked about what to do when we replace the cabinets, he said we'd have to cut around it - and it was too much work to replace the line in the wall.

I give them an A over all.

Description of Work
I have used them for plumbing.

Steve Rivers the owner of this company is the absolute best. We only use him. There is nothing against anyone else. We know his work. He is just great. The quote is for $800. This is just to take down part of the shower walls and put in new valve without the tile work. His work is excellent. He is very meticulous. The first time he came to our house that was 8 years ago he lays a mat down where he is going to kneel right in front of the sink so he does not even scratch your floor. Everything is stored on something and not on your floor. He is a real careful guy. I don’t think you would get anyone else as professional as Steve Rivers. He is polite and he gets a good price for his work. He knows what he is doing. He has been in business for over 30 years and that is why he is so successful. He has come to our house for a lot of things and he is always like that. We might end up doing the entire bathroom remodel not using him for this particular thing not because of anything with him. But we would definitely use him in the future.

Description of Work
RIVERS PLUMBING HEATING & AIR gave us an estimate for the bathroom remodelling.

I have used them before and they have always been very good. They had trouble finding what was wrong with the sink but they did find the problem. They were very conscientious. The price was high.

Description of Work
I used Rivers Plumbing Heating & Air to fix a leaking sink and a flapper on the toilet tank.

Overall, Rivers plumbing was great. On time, even when we needed the work done in a rush. Very polite, no problem with rude workers. Excellent return on our investment. I would recommend Rivers again, and have to others.

Description of Work
Needed a gas line run for my new outdoor BBQ and Fire Pit. The project was part of a totally new backyard landscape. Rivers Plumbing installed the line for us, and even moved it slightly when we decided to move the BBQ location a little bit.

The work was wonderful I was very pleased. They installed a brand new furnace in my home. I consider them to be very professional and the pricing was excellent. I didn't really shop around for prices, but I'm pretty confident that this was reasonable. I have had no problems so far and overall they did a great job.

Description of Work
I had a furnace installed.

We are not set up for very large jobs, including remodeling of kitchens and bathrooms, whole house waste and water repiping, commercial installations, tenant improvement work and all new construction jobs. While we have the experience and knowledge to do this work (we have been in business since 1979), our company now specializes in smaller jobs.