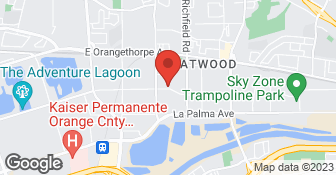 Hardy Windows was hired to replace two sliding glass doors and all of our downstairs windows from the original aluminum frames to new vinyl frames. When they first came out the job took double the amount of time we were originally told. The kitchen window was not installed correctly so we had to have them come out again and redo it. The first time it rained the sliding glass door had not been sealed correctly so our dining room carpet got flooded. We called them to have it fixed they came out looked at it said it was our fault and left. So if you like horrible customer service being called a liar and flaky contractors then this is the company for you. I will never recommend this business as we are still trying to get all the water damage caused by the caulking in the sliding door fixed. They are wasting our time.

Very impressive! All phone calls and e-mail responses were very fast. This is very rare! All on site visits for estimates, measurements and install were punctual. The install team was very neat and fast and their post work cleanup was very thorough. Their level of service is very rare these days. I recommend them very highly.

Description of Work
Replaced all 13 windows and 1 sliding patio door.

They gave me a lifetime warranty on my windows including the slightest adjustment to a sliding screen. Then they check all my other sliding screens, as well. The service is beyond your expectations! I am always delighted when someone comes out and performs service more than what you are expecting.

excellent work, fair price, left the place cleaner than when they first got there. i would recommend them to everyone.

I really wanted to give Hardy Windows an "A", but a few things I think are important weren't done. After I received HOA approval, I called to make an appointment the week before Easter. They said the scheduler wasn't there due to vacation. I wondered why only one person in the company could make appointments. I left a message, but no one called the following Monday. So, I called the following week to make an appointment. She said she couldn't set a date until she heard from the manufacturer. I told her I had Wed. 4-29 off if we could use that day, since they don't work on weekends. She said she couldn't promise-it normally takes up to 6 weeks. She'd have to wait to hear from the manufacturer on an expected date to get the windows and they are always delivered on Wednesday, so it would probably have to be another day. So, day by day, week by week, I waited for someone to call and set the date. Finally, Tuesday just before 5pm I called and said I haven't heard anything since my original call nearly 4 weeks earlier. She said you're booked for Wed-the next day! I said no one had called to let me know. You would think with a big order, they would call at some point to confirm the appointment. Doctors reconfirm, dentists, massage therapists, optometrists-everyone calls to remind you. Sending several workers and all those windows without ensuring you will be home seems incredibly lame to me. This short notice gave me little time to move my furniture and take down all my blinds. They should let you know to wash all your windowsills. I have two cats and didn't think about it until they had already put them in. I asked her how long it would take-she said they would be done between 3-4 pm. Only two men showed and they were not able to complete it in one day as promised by their salesman, Robert, who I found out is no longer with them. The person that referred me to them said five men installed hers. Jesse, the helper, said they should have had one other installer, but they are short handed. They were rushing to leave mid-afternoon. I asked why. Jesse said they had to be back by 3pm-they weren't allowed to incur overtime. So, I had to take time off the next day without pay so they could finish. I was only able to get half a day off, so my roommate had to leave her job early to come home. One upstairs window slides the opposite direction of what I requested. I showed Jesse a small flaw in my bathroom window where the strip popped out. He said he'd correct it, but he didn't. Josef said they would order another window for the one that slides in other direction and would come back to exchange it. It's been over two weeks and I haven't heard from anyone when this will be done. That is why I put "F" for responsiveness, and for the above-not confirming. I would also suggest to Hardy to either blow the dirt off the screens or hose them down before arriving. When it rained this week, the inside tracks had a lot of black dirt on them from the screens. I spoke to service who sent Eddie to correct the strip in the window last Tuesday. I think Josef did a fine job installing them, but it was obvious he was rushing and could have used someone else to help him. The windows do look very nice as does the French sliding door. I may replace my kitchen bay window, but not right away. I would consider using them again since my main complaint is with office staff. If she had called and went over the order, they would have had the correct window upstairs and not have to order a new one and come back.

Description of Work
Replaced all 9 windows in my townhouse and the sliding door in the kitchen that leads to the patio.

Casey was easy to work with and helpful. The crew did a great job. Very attentive and responsive to questions and observations. Cleaned up and were out in 2days. I will refer friends and family. This is a family owned business who pride the work they do.

Description of Work
We replaced all windows, patio doors and front door for a house over 3000sq ft.

Great sales team. extremely professional installation team. Crew cleaned up everything and finished the entire house in ONE DAY!! Windows look great inside and out and the house is much more quiet.

We went in on 10/10/2014. We told the salesman, who didn't tell us his name, what we were looking for. He didn't have a price for the windows or door but took down our name, number and email and said he would contact us the first part of the following week. 20 days later, we haven't heard from them.

Jim from Hardy Windows was the third salesman that we had provide a quote for replacing all the windows in our house. The first two really felt like a used car sales pitch. Jim was awesome. He did his measurements, discussed the product and our options, and then provided an itemized quote which he explained line by line. Neither of the other companies came close. Their price was actually the lowest of all the companies we talked with (total of 4). Hardy was my favorite, but being the lowest bidder caused me to hesitate and do some more research into the company and to visit the showroom. Given that their online reputation was good, and that we had a personal reference, we decided to go with Hardy. We ordered our windows, and a couple weeks later made the final install appointment. They sent a crew of 8 guys and got everything done in a day. The crew was great! They were all very professional and did a great job. They even re-installed all of our blinds even though their paperwork says they will not do that. They left the house "vacuum clean" meaning you knew they had been there but nothing was "dirty". We put our furniture back into place, did some vacuuming, and the house was back to normal. Not bad considering that the place was like a very busy construction site all day. For whatever reason, our order was missing most of the screens. We also found that our two sliders were not keyed the same and required separate keys. We set up a follow-on visit a couple days later and both issues were resolved in about 20 minutes. My two gripes: 1. We were told to expect a phone call once they knew the delivery date of the windows so that we could set up the installation appointment. The time frame passed by and we received no call from Jim. I called the office and had an appointment in a few minutes. 2. When registering for the window warranty on the manufacturer's website, it asked for two pieces of info that I did not have. I emailed Jim and never got a response. Again I called the office and they helped me out with no problem. The office staff was very prompt and helpful the two times I called, I just should not have had to call. This was a minor inconvenience, but lack of response is something I notice. I would certainly recommend Hardy to anyone and would use them again.

No Job Is Too Small Have you ever desired an exquisite remodel for beautiful interior work such as new interior & exterior doors for your home Bates Construction, is your finest choice in quality construction, fine finish wood work, masterful remodeling all right here in our community. Bates Construction, creates elegance in building or remodeling for your environment. Whether it's interior, Exterior trim, or simply upgrading. I serve your home improvement needs as you'd wish. Producing consummate craftsmanship, with pride in doing great work, we care for your place and your project, as if it were our own. We allow perfection to manifest, and right when it should be. Rest assured with Bates Construction; it's our perfectionism you will love. Our fine finish work is guaranteed. Call today for the beauty and elegance you're seeking. I also take PayPal and Venmo for a form of payment.  …

Specializing in all phases of window installation and repairs, skylights, shutters, doors, and more! We guarantee your satisfaction and we won’t leave until the job is done right. We pride ourselves on the quality work we provide, while delivering great customer service! Check out our services offered and call or click to schedule a free estimate today! Hablamos Espanol!  …

We help homeowners save a lot of money with our beautiful energy-efficient windows and doors, which are rated the best in security and noise-prevention, and we guarantee the lowest price! All installations are performed by experienced craftsmen for a professional finished look and all quotes can be done virtually or in person.  …

How is Hardy Windows overall rated?

Hardy Windows is currently rated 4.7 overall out of 5.

What days are Hardy Windows open?

No, Hardy Windows does not offer a senior discount.

Are warranties offered by Hardy Windows?

What services does Hardy Windows offer?