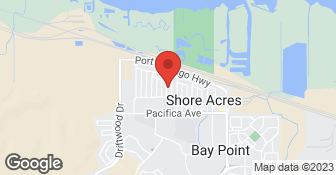 We are a small, independently owned family business with 40 years of experience offering the best value in landscaping and concrete works in the East Bay Area and beyond. We are experts in all things related to concrete, whether bare, colored and stamped. We offer free estimates on: Residential & Commercial concrete pouring, stamped and decorative concrete, sprinkler system installations, general landscaping maintenance and clean up, tree removal, artificial and natural grass installation, bark installation, timers, retaining walls, and general outdoor maintenance. We also specialize in patios and artificial turf installation! Give us a call, our prices are reasonable and the quality of our work is second to none! Thank you for considering us for your next project!  …

We specialize in complete landscaping, concrete on walkway/driveway/broom finished and stamped, retaining walls, fences and gates, sprinkler/drip/drainage, sod installations. We have been in business for 15+ years started off with just father and son bonding and we found love and passion to build a business together with a good team on our side we can help our customers in need.  …

First class work on two projects. First a brick deck and portico 10 years ago followed by the sunroof this month. High quality, professional and attractive work. Carlos stood out among other bidders as knowing his stuff and have great ideas as well as being creative to give you want you want. He and his team show up on time, do excellent work, finish on schedule and involve us, as needed, in anything that comes up. We would not hesitate to recommend Metamorphosis to anyone.

Description of Work
Demo old roof over an existing patio and design and construct a new all redwood sunroof.

Upon arrival, the guy (Jesus) immediately gave me the creeps. I was hesitant to let him into my house, but figured I was being stupid. We went out back and he glanced around for a little bit, and ask if I had gotten other quotes. I told him yes- one for $8500, and one for $7200. He said that his was going to be more. He hadn't measured the fence yet, nor asked what I wanted, just said his was going to be more than that. He pulled out his cell phone and typed the number "11,400" into his calculator. He showed it to me, and said "This is my number, but see what I am going to do for you..." He did some calculations, speaking out loud as he did. He came to a total of $10,000. He then said "Okay, talk to me here, what are you willing to pay?" He wanted to haggle, and was making me angry. Fine dude, let's haggle. After much discussion I talked him down to $8,000. He was pushy. We got into the specifics of how long the job would take, what day they would start, etc and all of a sudden he smacks his hand to his head in a theatrical way and say "OH! Haul away! I have to take all this wood to the dump for you. That's $750... but for you, I'll do it for 5. $8500 total!" I glad-handed him out the door. I spent over an hour with this guy and got nowhere.

Description of Work
I called this company for an estimate to replace my entire backyard fence, and had to leave a message. They called me back promptly, within an hour, and we scheduled something for the next day.

The person from Metamorphosis Construction did an excellent job and came in at the lowest bid. He transforms ugly buildings into beautiful ones. He did a terrific job. He started ahead of schedule. We encountered small problems with the sprinkler system and the owner himself came to supervise the repair. He spent three hours doing it and he is quite knowledgeable. His craftsmanship was really excellent. I mentioned that I had a little bit of extra work to be done and he put his man immediately on the job. It was a work of the steps leading from one part of the deck to the other, it was just a slight modification and he did it quickly. The next lowest bid came in at $2000 higher. I have recommended him to others.

Description of Work
Metamorphosis Construction did landscaping for me.