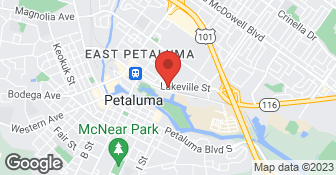 So far, the floors look great and the project is on time. Gary at Abbey Carpet is very responsive and professional. Steve Potter who is installing the floors is doing a great job.

It was horrible and I will never use them again. Ultimately, we ended up getting what we wanted but the owner of the business was very reluctant throughout the process. We had started with them about 8-10 years ago and ended up having a bad install. We had asked them to come out and fix it and they had reported to us that they thought that it wasn't that bad. They knew that we were planning to change the flooring over a period of time but they never let us know that the flooring that we had requested was discontinued when they came back to continue the work. So, we ended up having to change flooring. We had a split between the boards all the way down our hallway that had to be corrected. That particular issue was what I had them come out and inspect and they had said that it was no big deal. We ended up finding out that the person who had come to my house to look at it had stated in their records that the split was because of earthquake damage, which was a complete fabrication. They were going to end up putting a transition molding at the end of my hallway in a horrible location that was going to be an eyesore and it would have been so obvious that we had a different type of flooring. My husband had to deal with them very aggressively in the end and finally got the owner to come out to our house and replace the flooring in our hallway and install new flooring in our entry hall and adjacent sitting room. Ultimately, we ended up getting the flooring corrected and we now have beautiful flooring. There are a couple of places where there are gaps between the wall and the floor from the original install. The work from the original install was so bad and they knew who had done it but that person still works for them. We will eventually have to replace our bedroom flooring because it doesn't match the rest of the house. The new installer who came out really did a good job.

Description of Work
We used Abbey Carpet & Floor for installation of hardwood flooring in our entry hall, hallway and adjacent sitting room.

They were easy to get ahold of and prompt to schedule an in-house visit. They took measurements and presented me with options at their showroom. They have a wide selection of materials and were extremely responsive when a small problem occurred.

Description of Work
They tore out original flooring and installed wall to wall whole house carpeting and vinyl flooring in the kitchen. My contact was Gary, and he was wonderful throughout the whole process.

Specializing in repairing & refinishing of solid hardwood flooring since 1990. However, I am well versed in the installation of prefinished solid hardwood, engineered, laminate & VCT flooring. I also install stairs & moulding. I've never felt like a carpenter, but more so an artisan. My business motto is "Uncompromising attention to detail, craftsmanship & integrity." Being both a visual artist & a gigging musician passion means everything to me. This is not what I do, but who I am. I invite you to look at my Harmony Hardwoods Facebook page where I have a bunch of videos that show how and why I do the things I do. It’s been very helpful for my customers for years now. It’s an open forum. You don’t have to be a member of Facebook to look at my work.  …

If you are looking to rejuvenate your home look no further than HGO! We are the foremost authority in home improvement services for the San Francisco Bay area. We are a family owned and operated company specializing in all aspects of home improvement with our main focus being flooring. We replace and install all types of floors including Tile, Laminate and Wood and much more! Contact us today to schedule an appointment for your home.  …

Abbey Carpet & Floor is currently rated 3.7 overall out of 5.

No, Abbey Carpet & Floor does not offer eco-friendly accreditations.

No, Abbey Carpet & Floor does not offer a senior discount.