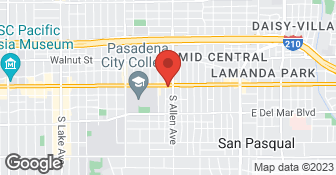 We are involved of fireplaces,built in gas grills and mail boxes with four employees.We work with subcontractors as well. We are certified with C.S.I.A (Chimney Safety Institue Of America) and F.I.R.E Organization and member of (N.C.S.G) National Chimney Sweep Guild. We have California contractor license.We carry wokers comp and general liability insurance.All these crtifications and insurances can be submitted upon request.We Accept personal checks and credit cards....

We come to your home and professionally steam-clean your BBQ....Have your BBQ shine like new...  …

He was very friendly and conscientious of keeping the work area clean. Everything went very well and the fireplace looks very modern and in time for the holidays.

Description of Work
Initially called on a Friday for a chimney sweep using their $89 coupon. He stated he would call me on Monday, which he did and came by that same day. After the chimney sweep I asked how much it would cost to revamp the fireplace from gas logs to glass. After explaining it could be done the next day in an hour I decided to go ahead with the work for $550.

Harry, the owner was very knowledgeable and easy to work with. He was patient and informative through out the whole process. He made sure the outdoor Barbecue island was not only beautiful but very functional. The Fireplace install and the chimney repair went without a hitch and the projected was completed on time as promised. I really enjoyed working with Harry and will definitely recommend his services.

Description of Work
Fireplace installation and Chimney repairs. Outdoor island for my Barbecue.

Fine. Harry, the owner, is very pleasant and mailbox was ready and installer (Harry's cousin, I think) was available earlier than expected. The installation was difficult because a metal post from my old mailbox had to be dug out of a cement block that was buried maybe 2 feet into the ground! I did not think he'd be able to do it, but the installer got the entire ugly block out of the ground using his own brute strength! so he could make a clean, new install. Installer was very patient in getting the measurements just right (required height and distance from the curb) and did a very good job. I think I paid more for the mailbox than I could have elsewhere, but for the time it took to install, I am satisfied. Love my new green Victoria-style box. Harry did try hard to upsell a new gas fireplace...very tempting! But I had to stick to budget. Maybe next time. I would work with them again.

Description of Work
Purchase and install new curbside mailbox with post. Remove old post from cement prior to installation of new.

They were able to install the same day, which happened to be the day before Thanksgiving (we wanted to have a cozy fireplace for our guests). They sent someone out right away and did the install perfectly. We had no complaints. They were fast, prompt, professional, and courteous.

Based on our phone conversation the gentleman I spoke to said that he knew what the problem was and it would cost $600.00. I ended up calling a different company and it was something simple and they were not going to charge me.

Description of Work
I called Royal to get a quote.

We went to Royal Fireplace in the late afternoon. The owner was there and we talked about what was needed. He showed us exactly what was needed and was able to send out a man immediately. The reconnecting of the gas line was not easy as access was not through the normal under-the-house access pane. We had the gas line installed by early evening and the ceramic logs were put in place early the next day. We enjoyed a fire that evening. We really love the result. The folks at Royal Fireplace are honest, responsive and do quality work. This was the second time we used them. The first time was to repair damage after an earthquake.

I had to call several times just to be told that he didn't want the business.

Description of Work
I tried to get a quote for an install of a gas insert fireplace that I purchased online. Because I didn't buy the unit from them (and in turn pay their supplier mark-up), was told they couldn't do the installation. After a brief phone conversation, it was clear the owner is a guy who is out to screw customers with up-charging and is not concerned with his company's reputation or the community it serves.

Came here to get some wood logs for my fireplace. I also asked harry the owner if he can install fireplace glass doors on my two fireplaces. He told me he would come on sunday to measure. So Sunday comes and I waited for a few hours from the time he told me he would come. I tried calling on sunday and he does not answer the phone. I called again on monday and finally he anwers the phone. Asked him what happen and he said he forgot. Then I asked him if there is another time he could come and he told me he would call me and that was back in November. I still have not received a phone call from him. Thanks harry for wasting my time.

Description of Work
Harry told me he would come for an estimate, but did a "no show, no call, no pick up phone."

As new home owners, we were buying a foreclosure, as is, and since our overall inspection went well, we didn't feel the need to do a chimney inspection since which ever way it went, it would not stop us from buying the house, and they specified no fixes, and there was so much competition to just get the house that to ask for repairs or cash back would have maybe caused the cancelation of the purchase. After we moved in, I called this company for their chimney cleaning and inspection. The workman was prompt, professional, quick and clean, which was great. He did say that he saw some cracks on the outside of the chimney above the roof, so he doesn't feel it would be safe to use until we can install a liner for a cool $3500 - yikes! As new homeowners it will be awhile till we have $3500 to spend on that. He did offer if they did the work, they would install gas logs for free. We were very disappointed, but this can be expected in older homes, so in the meantime, I'll put some pretty candles in there, and when it comes time to having the time and money to do this, we'll definitely get some second opinions just to make sure.

Description of Work
Cleaned out chimney and inspection

We recently moved into a home that had been unoccuppied for 5 months and not properly maintained for abut 7 years. I did not want to light any kind of fire without first having the chimney checked and cleaned. A two man team came out. One on the roof and one by the fire place. They checked for safety and then cleaned it out. Our chimney is now ready for use!