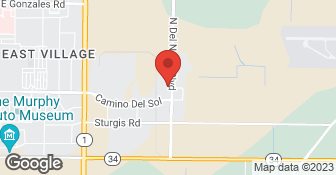 I already had an excellent HVAC guy who had serviced properties in Los Angeles County for me, but when the heater at a property in Ventura County broke down, I had to find someone new as the location was outside of my guy’s service area. I was a bit worried as I know how important it is to deal with someone both competent and trustworthy when it comes to heating and air systems which are not cheap! Plus the residents of the property were elderly which meant that heat needed to be restored asap. After researching a number of large repair companies across the web that promised same day service (but who either didn’t pick up the phone or had ratings that smelled of foul play), I decided to give Anacapa a try. My call was answered by a friendly receptionist who offered to schedule a technician for the following morning. Brian showed up promptly at the appointed time. He was courteous, skilled, and dedicated. He diagnosed an erratic motherboard on the aging system, sourced and acquired the part from a supplier in the Valley, and returned that afternoon to install and configure it. His explanation of the issue and cost was clear. There was no upselling or shenanigans, just a solid repair done at a reasonable price and good turn-around. Thank you!

The estimate had several options, but clarification was needed before the offer could be accepted. A heater/FAU would need to be installed with confirmation that it was AC ready, i.e. to be done a later point in time. Unfortunately, two business days elapsed where this simple question was not answered nor could a more accurate installation date be provided. Due to project time constraints, we have no options but to go with another company.

Description of Work
The provider came out to provide an estimate, which was done promptly and professionally. The estimate was competitively priced.

fan went out during recent heat wave(naturally!). called anacapa and was scheduled for 2 days hence(fair time frame, given the high volume of calls during heat wave,I'm sure). Troy showed up right on time promised(great start!). conscientious, courteous, and professional appearance. he knew the trade, and worked efficiently. I would highly recommend Anacapa Air for any hvac needs.

Representative came out to my house to provide an estimate to add A/C. Eight days later I still had not received the estimate so I called their office (& confirmed my email address), and the lady said she would email it. After 2 more days I still hadn't received it, so I emailed them asking again for the estimate. It's been nearly 3 weeks now so I guess their lack of response means they no-bid. Strange, because the representative did not identify any issues with the A/C install and said it would be straight forward. My complaint is lack of honest communication through this process. Beware.

Description of Work
On-site visit for estimate to add A/C to my house.

They gave me a good estimate, but another company offered a longer warranty, so I went with the other company. They did give an excellent offer.

Description of Work
I was interested in hiring them to install a new heating and AC unit last summer.

Anacapa Heating & Air did a great job. I have a house built in 1987 and the heater went out. Kevin, the owner came out to give me an estimate personally. We ended up getting a new heater and air conditioning unit "he did not try to up-sell us) It was the best decision. Everything works great. Anacapa gave us a great price, cleaned up every day. Great technicians.I will definitely use them again!

Description of Work
Removed and replace old heater with a new heater and all new ducts. They also installed an AC unit. It all works great

Great work, professional and prompt. Price not as agreed...I had them do the job because I didn't want to wait for appointment with another company.

At around 3 the scheduler called and said the technician was running late and it would be closer to 4 but that he would be there. We appreciated the heads up. At 4:30 we began to worry about the job interfering with our evening plans, so we called the scheduler to check and she said the technician was tied up at another job, but he was close by and he would be there within the hour. When he hadn't arrived by 5:30 we called to cancel the job, but the scheduler had apparently gone home. When he arrived at 6:30 we told him that it was now too late and that we had plans for the evening. He apologized, but said we would now have to call the scheduler in the morning to reschedule. In other words, back to square one. We called the next morning and cancelled the job and called another company. They arrived within an hour of our call and completed the job within another hour.

Description of Work
Our air conditioner was out so we called and scheduled the company to come by between 2 and 4.

.After getting 5 estimates for the replacement of my heat pump, I decided to us ANACAPA HEATING AND AIR because I was very impressed with the clarity of the estimate I received from them. Everything was spelled out completely so that I knew exactly what I was getting, what was included and what wasn't. As I was making my decision I could just look at the paperwork and get my answers where the other companies were not as clear and I had to make phone calls to get answers. When they actually came to do the work, they were a bit late. They told me they would be there by 9 and arrived at 10:30 with the news that they weren't going to have the heat pump and air handler that day but they would get the rest of the work done. When I express disappointment and told them that I was promised they could get the job done in one day and that I had taken the day off for the purpose of being there, the worker I spoke to talked to his boss and the boss made the drive to pick up the equipment himself instead of waiting for it to be delivered.. That made me very happy. At the start of the day, there was a two man work crew but when the equipment arrived, another two men were called to help. The men worked hard all day and into the night. They finished the job at 9:30 pm. They fixed the molding around the entrance to my attic and repaired a vent that had gotten knocked part way out of the ceiling. I was provided with the requested "easy to read, large display" thermostat. All in all, I couldn't be happier with the work that was done. They also cleaned up after themselves thoroughly. I would give this company a high recommendation!

Thank You for your business opportunity. We value your opinion and business.
5.0

Don't have the time, it went fine from start to finish.

Description of Work
Excellent and informative serviceman. Was very personable, informed me of situation, arrived when communicated he would. An excellent representative of this company.

Thank you for your business opportunity. We appreciate your opinion and business.

Since 1979, Conejo Valley Heating and Air Conditioning has been delivering dependable, quality service and comfort. Our expert staff, technicians and comfort advisors work together to bring you the very best in HVAC and water heating services. Indoor air quality, hot water and comfort are our priorities and we’ve got the energy efficient equipment and service teams to provide it! We specialize in installation, repair, and maintenance. We’ve seen just about everything and will put that experience to work for you. We’ll help guide your decision process by answering any of your questions or concerns. Please contact us, we look forward to hearing from you. CSLB#:536465  …

Established in 2000, All Four Seasons has distinguished itself as a commercial, residential and industrial air conditioning and heating industry. As a family owned and operated company, fully licensed, bonded and insured, we strive to always exceed the expectations of our customers through integrity-based service and a high moral work ethic. Honesty, integrity and customer satisfaction are the foundations upon which we operate. All of our employees and technicians are handpicked and trained to the highest level of expertise and professionalism. In addition, we are EPA and OSHA certified. We certainly understand that you have many choices in HVAC service solutions, and we invite you to experience the All Four Seasons difference. From the most complex installations, to routine service and maintenance, you deserve to be comfortable at home or work, and All Four Seasons is there for you all year round. Give us a call today.  …

Anacapa Heating & Air Inc is currently rated 4.8 overall out of 5.

Are there any services Anacapa Heating & Air Inc does not offer?