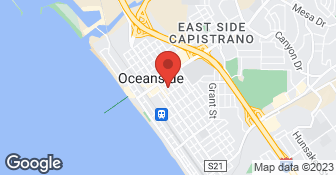 We did not go through with remodel after they demolished due to very messy job. Dust all over the house, they knocked art work and picture frames off the wall and broke some of them. I deposited $6,000 for cabinets which were never done. Porteous never refunded me a single dollar. This guy took all the money and did not even finish the job. Even sent him to small claims court but Porteous did not show up. I would encourage everyone not to use this company.

Michael Porteous started the demolition on November 28, 2016. Informed Michael of the drain line in the wine bar area. They cut however did not cap it. Therefore, there was a leak and had to empty the bucket every few hours. He did not show up till the flowing day. Nov. 30, 2016- They jackhammered the bathroom. Workers did not make me aware of all the frames that were hung in the room next to the bathroom. All frames broke and glass shattered everywhere. Entire downstairs was covered in dust. Workers left electrical wires in office and garage. Wrote a check for $6,000.00 per Michael it was for the deposit for the cabinets. Dec. 1, 2016- Demo continued. Texted Michael numerous times about all the leaks, but he NEVER showed up. Dec. 2, 2016 (Friday)-- Michael stopped by for a short time, and said he would take care of the leaks. NO SHOWED. My husband had to turn of our water softener for fear our house would get flooded. We fired Michael the next day due to LOUSY professionalism and responsiveness. Told Michael we would pay him $1,000 for the demo and that he would have to pay us back the $5,000. NEVER heard from him since.

Description of Work
Hired Michael Porteous to remodel our bathroom and wine bar.

Michael and his team were great. they were punctual and quick. I was worried about doing this before the holidays but they met their deadline and the job was done perfectly. any time I had a question, Michael was quick to respond either via phone, text, or email. never did I have to worry if the job was going to be done right. I highly recommend Michael and the Porteous Building Services team for any remodel job, big or small.

We used Ironwood Pacific Construction for our new home inspection. They usually do commercial work but they were recommended to us by a friend. We wanted to have the kitchen and 2 bathrooms upgraded originally, but we found it was so easy to work with Michael and his crew and the work was so professional. They even built a temporary fence in the backyard, without any additional cost, and bought our bulldog a bone to keep him at bay. No complaining, no hidden costs, and they treated our home with care while we were away. Every bit of work was fantastic craftsmanship from the wood cabinets to the tile showers. We're VERY happy with our new home. The heated floors were an amazing touch. These guys know what they're doing and we're so happy to have found such a solid contractor. Best part? The owner, Michael, would answer my every call. My husband would say I'm very picky, but Michael would just smile and encourage our creative side. This home is truly ours and has so much character because of the care this contractor took to listen to my ideas and talk them through with me. Bravo Ironwood!

What our customers think: "I have been using Advanced Sprinkler and Drainage Repair over the last 8 years, I highly recommend them. The customer service we receive is impeccable. The work and the customer service we receive is what keeps me a returning customer every time." "I have been a customer of ASDR for many years. They are responsive, thorough and always ready to propose a solution to make my sprinklers more efficient. I have happily referred them to others for any sprinkler or drainage issue." "It has been a real pleasure working with Advanced Sprinkler. Over the last two years I have had various works done. Your team is excellent from start to finish--the front office, scheduling and the work are all top rate!"  …

North County’s premier provider of custom network and home automation solutions. We guarantee our workmanship and your satisfaction. We pride ourselves on our expertise and delivering great customer service.Check out all the services we offer below and call -or- click to schedule a free estimate today!  …

We use sub-contractors for our roofing, swimming pool and spa installation/service; and other specialty trades such as fire protection (sprinklers), ANSUL installations, HVAC installations, and asphalt.

Porteous Building Services is currently rated 3.5 overall out of 5.

Are there any services Porteous Building Services does not offer?

We use sub-contractors for our roofing, swimming pool and spa installation/service; and other specialty trades such as fire protection (sprinklers), ANSUL installations, HVAC installations, and asphalt.