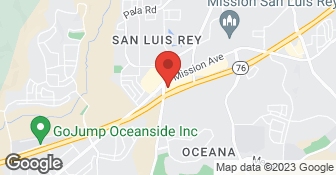 Axis Appliance Repair is a full-service consumer and residential appliance repair business. We repair all types of appliances: washers, dryers, refrigerators, microwaves, ovens, ranges, dishwashers, commercial refrigerators, A/C's, swamp coolers, trash compactors We service all brands of appliances. We work regularly with home insurance and warranty companies and are VERY familiar with most major brands, including very upscale appliances. We employ a large office staff and a number of technicians ready to serve you to your satisfaction....

great, he did a good job.

While they were available same day to replaced garbage disposal it all went downhill from there. New disposal was installed incorrectly and caused dishwasher (which is attached for drainage) to overflow due to built up pressure causing kitchen to flood. Thinking it was dishwasher issue because I had "NEW" garbage disposal I contacted and scheduled the washer repair and waited a week for service only to find out plug was not removed during install of new disposal causing washer no where to drain. I contacted Axis and waited a week for them to come back to address the plug issue. Fast forward 4 weeks and used disposal a few times a week because of our busy schedule. I phoned because I have a horrible sound like its going to fall off and a fork is stuck in it (not the case) I was told there would be a service call fee and if it was not fixable would have to purchase another disposal. ***! its not even two months old! Had I purchased from Home Depot installed incorrectly and flooded my kitchen on my own Home Depot would accept return and replace! Its called a warranty and customer service something Axis doesn't have knowledge of. When they have the $250 dangling in their future they can be here same day but when there is possibility they are covering their poor quality merchandise they throw out an appointment 10 days after my call to send someone out. I was not even provided a time of service but just day and date when they can fit me in. Might add I was a little disappointed with Angie's List after contacting about issue only to be told to post it here and perhaps the service provider would make it good.

Horrible company! Do not use them for any kind of repair. They came out too fix my freezer and ended up breaking both my ice machines. They could not figure out the issue and then had to call Samsung for assistance. After that they told me I needed a new fan but it was not guaranteed to work. I had to pay up front for the fan. Who does that? All of a sudden both my ice machines began working. So, I did not need the part and they did not have to come and put the fan in. However, when I asked for the refund, the manager only gave me a partial one. Said, I needed to pay for the shipping back plus debit card fees that he was charged. Never was I told this and never was I told that I had to pay CC fees. I would have paid in cash. I was disgusted so I asked for the rest and he would not give it to me. I finally got the balance after I disputed with my bank. Horrible people!

Description of Work
stove needed board

Very well. Technician cleaned out the dryer thoroughly and used diagnostic tools to figure out the problem. It took two visits but problem was resolved in a timely manner. Technicians were professional and we highly recommend their service.

Fast response by phone and arrival at job site. Diagnosed problem, ordered part and installed in a timely manner. Would use again.

We did not resolved the problem. Pricing was fair.

Description of Work
They came and assessed my microwave.

The technician showed up on time and diagnosed what he thought was the problem, ordered the part and came back a day or two later to install it. Problem is, it didn't fix the problem; now it needed a new transmission, which if I'd known in the first place wouldn't have even started the job. So I wasted half the cost of the original repair and had to get a new machine anyway.

They were very good.They gave me an estimate, they came on they day they said they going,they cleaned up their mess and they did everything that i want .

We come to your home and professionally steam-clean your BBQ....Have your BBQ shine like new...  …

We dedicate ourselves each day to providing the highest quality duct cleaning, mold removal and dryer vent cleaning care to our customers. Winner of the 2016 Super Service Award! We have also sought to give our new customers the highest confidence about our ethical business behavior. At SD Air Quality we offer unmatched customer service, the latest technologies, competitive pricing and top quality, support and solutions. Whether you have a small or large, business or home, we have the capabilities to clean all the mess. Our specialty is customer satisfaction and trust as well. SD Air Quality is your #1 choice for any type of cleaning and much more!  …

We are committed to excellence in every aspect of our business. We uphold a standard of integrity bound by fairness, honesty and personal responsibility. Our distinction is the quality of service we bring to our customers. Accurate knowledge of our trade combined with ability is what makes us true professionals. Above all, we are watchful of our customers interests, and make their concerns the basis of our business. Call today for all your dryer vent and air duct cleaning needs!  …

Bonded
Insured
All statements concerning insurance, licenses, and bonds are informational only, and are self-reported. Since insurance, licenses and bonds can expire and can be cancelled, homeowners should always check such information for themselves.To find more licensing information for your state, visit our Find Licensing Requirements page.
General Information
Free Estimates
No
Eco-Friendly Accreditations
No
Payment Options
Check, Visa, MasterCard, American Express, Discover
Senior Discount
No
Warranties
Yes

We do not offer plumbing, electrical, services or service small plug-in appliances (such as coffee makers, blenders, etc.).

Axis Appliance Repair is currently rated 3.8 overall out of 5.

No, Axis Appliance Repair does not offer free project estimates.

No, Axis Appliance Repair does not offer eco-friendly accreditations.

No, Axis Appliance Repair does not offer a senior discount.

Are there any services Axis Appliance Repair does not offer?

We do not offer plumbing, electrical, services or service small plug-in appliances (such as coffee makers, blenders, etc.).