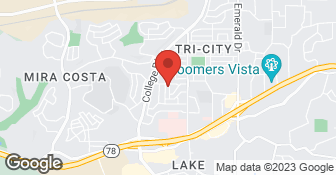 We are a leading company, specializing in roofing installation, hvac, gutters, insulation, radiant barriers and whole house fans. Besides the unbeatable, vip treatment offered to our customers, we are known for our quick, 'next day on the job' workflow. So if you're in an urgent need to get that new roof installed, you made a wise choice approaching us. And no, this does not mean that it will increase the price just because we are quick. In fact, Peak Construction of San Diego is known to be among very few companies to actually offer very competitive prices. Give it a try, and find out for yourself. With over 15 years of experience, rest assure that your roof or hvac job will last for as long as it can be stretched. We actually offer a 30 year warranty for all of our roof jobs. Along the job, you'll get to meet our super friendly staff who will be more than happy to answer any of your questions and explain to you in details all that need to be done. We are a fair size company. Not too small that we won't be able to backup our work and not too large to make us careless about you. Let us know if you have any questions. After all, we want to make sure that we stand to our reputation for many more years to come  …

Sequoia Roofing and Solar is a full service roofing contractor and solar installer serving all of San Diego County. (50 years combined roofing experience) and so much more! We specialize in composite, tile/concrete and metal roofing. We are one of the leading residential roofing and Solar services companies serving all of San Diego County. We feature the highest quality workmanship and materials supported by superior customer service, experience and integrity. Our mission is to constantly strive to become the most respected roofing and solar company in the industry. For your convenience and peace of mind we are fully licensed, bonded and insured. Family owned & operated. Additional contact name - Michael Rochholz. Award winning.  …

Everything went well. Adan's crew did a great job and completed work when promised. I would definitely recommend him.

and Adan said I was on his schedule. No show, no call, and no response to my numerous followup calls over the next 10 days.

Description of Work
Outcome: no show, no call. I discovered a leak after the recent rain. A neighbor was getting a leak repaired and referred Adan. He came by after finishing the repair of the neighbor's leak and gave me an oral estimate of $600 to repair a leak in a valley of our tile roof. Adan said that he had to finish a job in the morning and would call me the next day to tell me at what time he would be coming to repair our leak that day. I did not hear from him and rain was forecast, so I called him and Adan said that he needed to finish his current job before he could repair our roof. Adan said that he would do the repair 2 days later

Description of Work
Retile roof by re-tarpapering, reusing existing tiles and adding extra tiles that were deficient. Remove and replace fascia boards and some other boards damaged by termites.

Adan originally replaced the broken tiles with not matching tiles, but when we did not like the tiles, he found matching tiles (extra cost) and took down the unmatched tiles and replaced the felt again at no extra cost. He was very honest and responsive. His price was half that of other estimates we had been quoted.

Adan repaired 2 roof leaks at a cost of $600 each - one on my rental property, the other at my home. Initial contact was difficult - I missed his first callback and then struggled to get him again - but the first storms of the season had just hit, so he was super busy. His quote was way less than other companies, for the same work. Adan arrived a little later than planned at my home property, but was extremely polite, efficient, and both leaks were fixed without incident. 6 months later, and the fixes are still holding. I would definitely recommend Adan, and would definitely use his services in the future.

Adan reroofed my neighbors house several months ago so when it was time for my house he was one of three roofers I checked out with the BBB and Angie's list. One roofer never went on roof, one went up and spent all his time measuring, Adan spent considerable time checking out my roof in detail from on top and all around the bottom of the eaves. His quote was the lowest, I believe it was because he knew the condition of the roof, and the quote was inclusive of any repairs and replacement of all cracked and broken tiles. He explained what was code when the house was built, what is the current code and what he proposed to provde and why his proposal exceeded code. The first installation window was rained out and was rescheduled. They showed up on time and the first day had all the tiles removed and stacked, three areas of rot (10 ft2) replaced and primed, two layers of 40# felt installed with new drip edges. The second day the skylight opening was reframed to make it taller, new flashing was installed everywhere, the tiles were relaid, everything was cleaned up and the repairs were painted. Everything was complete with the exception being a few cap tiles and the installation of the skylight that was a custom size. The few cap tiles were installed on the third day and the skylight was replaced about a week later when the manufactorer finished it. One of the most professional jobs I've had done.

After going around in circles trying to find the cause of a leak, I called Adan Cruz to inspect the flashing around a vent. He did a very thorough job establishing that the roof vent was not the source of the leak (which turned out to be from a compression fitting, despite what a plumber had told us). I was very surprised when he refused to charge anything for the inspection, even though I would've gladly paid for his time and effort. This company will be at the top of my list when I do need some roof work, no question about it!

Adan the owner inspected our roof and indicated that we needed a new roof, roof was over twenty years old and leaking. Said it would take three days, and explained how he was going to do it and what materials were needed. No big surprises along the way, his workers worked hard and did a great job cleaning up everyday. very pleased with the workmanship and Adan was on the job site everyday. I have recommender him to all of our friends.

He is very upfront with everything he does, and is very prompt, professional, and down to earth.

Description of Work
He replaced my roof.