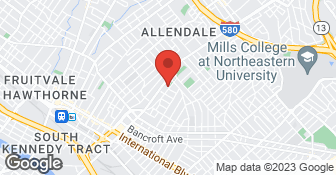 We specialize in sewer line replacements, the toughest jobs in the trade. Also we do video inspections for your sewer line. It's like a colonoscopy for your home's drainage system. It gets recorded on a DVD for your entertainment, really, the DVD gets passed on to the inspectors for passing home inspections. Our plumber services are vast. We can help with back ups, simple clogs, replacing a water heater or upgrading to a tankless. No job is too small or too big for us. We do new constructions, remodels and custom work for private & public buildings. Award winning....

We never spoke to anyone from Toto's. We never did get that inspection or estimate for a new A/C unit. Anther company rep was supposed to come out but we got a text saying they needed to cancel our appointment. We are still waiting....

Description of Work
We wanted our A/C inspected and an estimate of a new system.

Description of Work
Sewage Pipe Over Flow and Roots removed

The job went fine. Benjamin and Jorge arrived on time and did good work for a fair price.

Description of Work
They scoped out my plumbing pipes to get rid of a blockage and cleaned out the P trap for two sinks that were draining slowly.

Raul was very knowledgeable and efficient!

After purchasing our home, we needed to bring the private sewer lateral into EBMUD compliance. We called Toto's after a bad experience with a previous contractor for the same issue. Toto's determined from a camera check that the line should have been in good shape, so they would do their own test. They were pretty clear about the pricing: it would be a certain amount to do the test. If there were a problem, it would cost more to repair it, but they had a clear maximum cost. The pricing clarity was important to us. A previous contractor had quoted us $1,700, then raised the price to $5,000 to replace the line when they found a leak. Toto's maximum was less than that to replace the whole line. They did find a leak, but they were able to fix it for significantly less than the replacement cost. They did the work well, verified that it would pass the test when the EBMUD inspector came, and it did indeed pass. They were easy to work with the whole time: responsive by email, phone, and text. My only complaint, which is pretty minor, was they banged up some of our deck and forgot to replace a couple of the deck screws.

Description of Work
Inspection and repair of private sewer lateral for EBMUD compliance.

Toto was the only plumber willing to do a full accessment of the situation before making a recommendation. Everybody else I hired wanted to be paid for every bit of work without results. Nobody could make any logical assessments and made recommendations that I could agree with. Toto is a breath of fresh air and he did everything he could to make a informed decision on next steps, all complementary. He quoted the best rates and after completing the job and we still had the problem he made a guarantee that he'll make it right without additional cost. I'll hire Toto again in a heartbeat and wouldn't hesitate to referral him. If I hired Toto first I would have saved thousands of dollars.

Description of Work
Bath tub, toilet and kitchen sink was backing up and Toto was the third plumber we hired

We made an appointment for 3 days later. They did not show up, or give any notice they couldn't make it beforehand. They eventually responded to my inquiry 90 minutes after they were to come that they weren't coming, without any further explanation. Luckily I was able to find another plumber later that day.

Description of Work
I contacted Toto's Plumbing to fix a leaking toilet.

Raut is amazing. I initially found him on Angie's list over a year ago and he has fixed multiple clogged drains, placed a new water main and then installed both indoor and water filters. There was a manufactures defect on one of the filters and Raul had to come back two times to make sure it was fixed correctly. He was never frustrated with the manufactures defect and always willing to help fix it. He did all of this with no extra charge. I recommend Raul without reservation. I will never use another plumber.

Called and left message on Friday. Sent an email on Friday. By Monday evening I had heard nothing. Very unprofessional not to have responded, even if it could not /or would not do the work. Will not try again.

They did a great job. Love those guys. I would definately hire them again.

Description of Work
They did a trenchless sewer replacement.