Don't pay for new concrete! Deckrete has the solution for your cracked and discolored concrete! Deckrete systems can beautify and protect your concrete. Imagine what you can do for the interior and exterior areas in your home like Pool Deck, Walkways, Driveway, Patio, Balconies, Anywhere there is concrete, Commercial finishes available. Deckrete Concrete Resurfacing offers a limitless number of custom patterns, textures and colors to choose from. We are dedicated to providing our customers with the most artistic, economical, and durable product available. We pride ourselves on achieving realistic looking, brick, flagstone and cobblestone. We work to provide the best solution for you concrete restoration needs, because if you are not happy, we are not happy! New concrete floors and waterproofing also available

Description of Work
Water drainage from backyard and for the most part, concrete resurfacing with color design

I worked with Victor, They did an excellent job. I would highly recommend them, They are professional. on time. he knows the business. very honest with a fair price.

Great suggestion to resurface versus replace. Estimate to repair driveway as well.

They did an excellent job! I am very happy!

It went pretty well. He gave us the option to get a better price that will work for him and us.

Description of Work
He did waterproofing and stamp.

They gave a very fair price. Very easy to work with. They started on time and finished on time. Even gave a guarantee. We were happy with Victor's work. He is a really nice guy as well as his worker.

Description of Work
We had an old coating in bad condition.

I made and confirmed an appointment. I was willing to pay for their time to come and write an estimate and asked when I made the appointment but the receptionist said they did estimates at no cost. No one showed up nor did I receive a call to reschedule. This was in my opinion very unprofessional.

Description of Work
Concrete resurfacing options for an area of about 1000 sq ft.

Unfortunately, when there were problems, Victor was unavailable. At first, within a month of the initial installation in January, 2015, it was clear that there was insufficient sealant on one quadrant, because the color literally washed away in the rain. This didn't seem like a big problem, because Victor told me on the phone that he was in Mexico, but when he returned, he would come right over and resolve the problem. He never came over and that January was the last time I talked him. In October, we remodeled a bathroom, and unfortunately, there were leaky trucks on our driveway. The oil stains are unsightly and the bathroom contractor wanted to resolve the problem. He asked me to contact the driveway contractor to find out what would take the oil stains out without taking the color out. I called Victor repeatedly and eventually, I contacted him. He was in Mexico; he said he would come over when he got back. He came over and promised to return to power wash the texture coat and apply new sealant. When the work was originally done in January, he said it would be necessary to reseal once a year, so in mid-November, it was actually almost time for new sealant! He water blasted the driveway, which took out most of the stains. Then he came back the next day and put on two coats of sealant. He told me there was no charge, but we insisted in paying him, as he did the work and applied the materials. Once again, the driveway looks beautiful. Would we do this again? No, because it doesn't last, no matter who does the work and how responsive they are. Very very expensive coating that cracks and stains. I've seen it done by other companies; it's the nature of the process. 2015

Description of Work
Resurfaced a 35 year old concrete driveway with a colored texture coating. The work was beautiful. Victor had great ideas about color and design. But then, when we had problems...

The crew were timely and respectful of my time and left a clean work area at the end of every day. Victor said it would take a week and that is what it took.

Description of Work
Victor and his crew resurfaced our existing pool deck and also poured new concrete to enlarge the space.

This was the easiest and most successful home remodeling project we have done in years! Victor came early every day with his helper and worked steadily to get the job done. He kept us informed every step of the way, so that we were aware of what he was doing and what step came next. He gave us excellent advice about color and pattern. He also recommended some structural revisions that might help keep the cracks from reappearing, or new cracks from forming. Victor is a fine technician but also a real artist, with a good eye for color and design which was very important as there is a huge amount of concrete in the front of our house. We could have gone terribly wrong with the wrong color or pattern, but Victor listened when we explained what we liked and he made sure that the job turned out the way we wanted. The job, by its nature, was messy, but they cleaned up after themselves every day. Before we started, he told us how long this all would take, as we needed to obtain temporary street parking permits from the city, and he was done on the day he said he would be done.

Description of Work
Victor resurfaced a 35 year old cracked and stained concrete driveway. He also resurfaced a courtyard in the front of our house.

Meetings times were not always punctual, but this could have been a communication problem on both sides. The work area was left with concrete debris on the lawn and a tool and bucket left behind. The contractor returned to collect the items did some clean up and detailed some unfinished areas cosmetically. Overall the job was done satisfactorily after a few items (clean up and detail) were done. The contractor is pleasant and easy to work with.

Description of Work
Demoed part of driveway and replaced the concrete in a 10 by 8 area, ground down several uneven places elsewhere, and patched where possible. 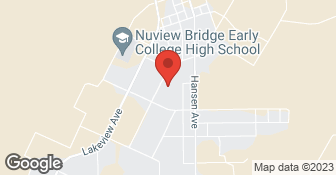 Deckrete Concrete Resurfacing, Inc. is currently rated 4.4 overall out of 5.

No, Deckrete Concrete Resurfacing, Inc. does not offer eco-friendly accreditations.

No, Deckrete Concrete Resurfacing, Inc. does not offer a senior discount.