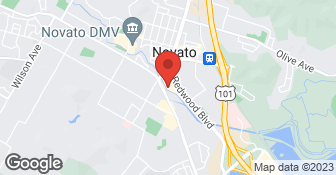 Description of Work
They installed my vinyl flooring after being very helpful with comparing different manufacturers as well as flooring products. I had a complicated case as I lived in Washington and had my remodeling contractor going to Santa Rosa from his home in Boise so scheduling was involved. We talked on email and the phone. Ray was very patient, helpful, and professional through months of this process. I am very satisfied with the pre-installation help as well as the installation itself. They have their own installers. Ray was out to my house a couple of times insuring the measurements due to my change. About half of my floor space of 1400 sq ft is in the vinyl. It looks like a perfect job to me! Karen Averitt

The person that they sent out was a sub-contractor. He has came out twice now, and the first time we were really happy. The man said that the flooring was discontinued, and it would cost almost as much as it originally cost to have it installed. I called Empire, and they contacted the man who gave the estimate. Empire themselves have been great.

Description of Work
I called Empire Floors to get an estimate on installing laminate floors.

Everything went great. It was a bit pricey for what they did. I would definitely use them again. The customer service is great.

Floor Pros was established in 1980 as a family owned business to provide the San Francisco Bay Area with quality hardwood flooring installation, sanding, and refinishing services for both commercial and residential homes and businesses. We are committed to providing our customers in San Francisco, San Mateo, Marin, Contra Costa, and Alameda counties with exceptional hardwood flooring services. Our new customers are all wondering the same thing, what makes Floor Pros qualified for quality work? We are members of several institutions that set high standards for the hardwood flooring industry. Trained and certified by the National Wood Flooring Association, who sets the benchmark for professional conduct, we guarantee that our technicians are the best in the industry. Also, we are a proud member of USGBC, who sets the standards for environmentally sustainable construction. Believing that providing quality services is a continuous process, we send our technicians to hardwood flooring workshops in and out of the San Francisco Bay Area a few times each year to ensure that they are current with techniques and technologies. This year we have enrolled our technicians for Leadership in Energy and Environmental Design (LEED) certification by USGBC. Understanding that sustainable business practices are in the best interest of our customers, suppliers, employees, and environment, we are one of the few hardwood flooring companies in based in the San Francisco Bay Area that are pioneering LEED projects. We also believe in using the best product our suppliers can provide us to ensure that the wood flooring is long lasting and durable. Each year, we make three to four trips to our supplier’s headquarters; whether it’s in Canada, Seattle, or Brazil, we go the distance to find the best brands. Some of the prestigious brands we carry are: Mirage, Lauzon, DuChateau, and Oshkosh Designs. Each brand and product we use and carry is hand picked by our current founder and president,  …

If you are looking to rejuvenate your home look no further than HGO! We are the foremost authority in home improvement services for the San Francisco Bay area. We are a family owned and operated company specializing in all aspects of home improvement with our main focus being flooring. We replace and install all types of floors including Tile, Laminate and Wood and much more! Contact us today to schedule an appointment for your home.  …

We have the experience and dedication to get the job done right! Specializing in hardwood floors services; We guarantee your satisfaction, and we won't leave until the job is done right. We pride ourselves on the quality work we provide, while delivering great customer service! Call or click for your FREE estimate today!  …

Bonded
Insured
All statements concerning insurance, licenses, and bonds are informational only, and are self-reported. Since insurance, licenses and bonds can expire and can be cancelled, homeowners should always check such information for themselves.To find more licensing information for your state, visit our Find Licensing Requirements page.
General Information
Free Estimates
Ask for details
Eco-Friendly Accreditations
No
Senior Discount
No
Warranties
Ask for details

Specialty Tobacco Outlet is currently rated 4.8 overall out of 5.

No, Specialty Tobacco Outlet does not offer free project estimates.

No, Specialty Tobacco Outlet does not offer eco-friendly accreditations.

No, Specialty Tobacco Outlet does not offer a senior discount.

No, Specialty Tobacco Outlet does not offer warranties.