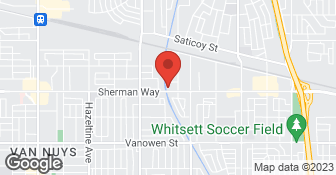 Large selection of in stock flooring as well as temnants and closeouts for quick installation....

Description of Work
I have forgotten the price but the service was great they came out and stretched a carpet and did all the furniture moving for me the carpet looks great and the guy were very efficient. I have their number and would use them again.

they didn't do anything. Never came out

Description of Work
nothing was done. Never returned call.

I was referred to Clint by our plumber, who we love. Clint offered to come by my house to take a look at the space, which was fantastic. I have small children, so going to him would have been cumbersome. We discussed ideas on the phone and he brought some samples with him. He made some suggestions based on our short and long-term goals for our house. After he left, I compared the carpet to another I was looking at and I really preferred what he suggested. It was a really nice remnant; a quality piece of carpet we certainly would not have afforded were it not a remnant. His help was terrific. He steered me toward what I told him I needed and wanted, which with the number of flooring options is really important, but never once did I feel like he was deciding for me - he was just helping me stay true to what we wanted. The day of installation, the guys were VERY professional. It's easy to be professional when everything goes right, but everything didn't go right this day. We had a hand-made cradle in the room where the closet patch was to go - my father made it for my oldest, and all my kids have used it, so we are quite attached to it. It can only be moved a certain way, so I moved it and told them not to and why, but later saw they had moved it - and that they had moved it the wrong way. I flipped! We had someone do that years ago and break the foot on it. After I regained my composure, I apologized for shouting and reiterated my instruction that they were not to move it - the guys were very kind and real stand-up guys. They apologized and didn't skirt around me after because I had gotten mad about what they did. I was truly impressed with their professionalism. After the install Clint followed-up and had someone come back out to make an adjustment where a carpet tack had been poking out. The installer re-nailed the entire strip to make sure there were no further problems and my little ones did not get hurt. Over all they were fantastic. I would strongly recommend them and would absolutely use them again.

They had a good collection of carpets. Their pricing was very reasonable as well. The staff was professional and helpful. I was satisfied with their service.

Description of Work
I bought new carpets from them.

NICE SELECTION AT THIS PLACE. THEY DON'T HAVE A MINIMUM SO YOU CAN BUY WHAT YOU WANT. THEY ALSO WILL COME AND DO BIG JOBS.

Description of Work
I NEEDED A PIECE OF CARPET FOR MY KITCHEN. I DIDN'T LIKE THE COLD FLOOR. I BOUGHT 8 SQ FT OF CARPET (APPROX).

Hardwood Installation and Resurfacing/Refinishing Specialists w/ High-End Custom Staining & Finishing. Special Pricing for Angie's List Members. Olde Tyme Floor Co., Inc. is a boutique, full-service Hardwood Flooring Contractor, established over 40 years ago. Family owned and operated, our employees are hand-picked and several have worked for OTF for 10-20 years. We always perform the work and NEVER subcontract to other companies. Our passion for creating everlasting beauty in your home extends beyond the boundaries of our work. It is the essence from which we pride ourselves on, delivering exquisite craftsmanship and attention to the finer details, bringing your dream home to life. Old Tyme Floor always delivers first-class service that is uniquely tailored for each individual client. We are fully licensed by the State of California (#637696) and are proud members of The Better Business Bureau and the National Wood Flooring Association. Our services include Installation, Sanding and Refinishing, Staining, Wire-brushing, Hand-distressing, Staircases, Crown-molding, Door & Window Casings. Additional services: exterior decks, custom dance floors, racketball courts, plywood sub-floors installed, pre-finished engineered floors installed, leveling, water damage.  …

Mike Pillar and Sons is a family owned and operated business. We have been providing over 40+ years of "old fashioned" & modern hardwood floors to the West Los Angeles, San Fernando Valley and Ventura County areas. Most of our employees have been with the company for over 20 years. We have a field supervisor Michael Pillar, along with Mike (Owner) who promises the personal attention and service that each customer deserves. You can always call the office as well and speak to Wendy Pillar, who can help answer any questions that you may have.  …

How is CARPET DEPOT overall rated?

CARPET DEPOT is currently rated 4.6 overall out of 5.

What days are CARPET DEPOT open?

No, CARPET DEPOT does not offer eco-friendly accreditations.

No, CARPET DEPOT does not offer a senior discount.

Are warranties offered by CARPET DEPOT?

What services does CARPET DEPOT offer?