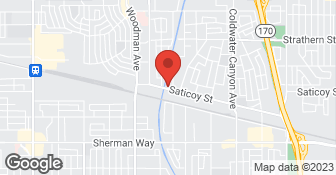 Since 1989, CaliforniaBlinds.com has grown from a small home-based business into one of the largest independent window covering retailers in the US . With well over 200,000 satisfied customers our products cover the windows of thousands of homes and businesses across the country with styles ranging from the basic to the latest in window decorating trends....

It didn't go well. I waited 9 weeks for my new shades. When the installer finally came the measurements were off, he took off my old shades and left telling me that they would call me back to tell me when they would get the correct blinds. The owner or manager Cody was extremely rude to me, speaking over my voice and barely apologized. Do not hire these people.

Description of Work
installation of blinds

It went horribly. I scheduled an appointment with a time window between 11am-3pm and was told I would be called 30 minutes prior to the arrival of the installer. The install, between 11am-3pm, I received no call, no installer, nothing. Half an hour later, 3:33pm, the installer, Paul, calls me to tell me he's 5 minutes away. I tell him that no one is there any more because it's passed the scheduled time range and people have gone back to work. He tells me that I will be charged a rescheduling fee for "wasting their time." So, they're a half hour late, and I am the one wasting their time. He tells me I need to get someone out there in a half an hour (because I was "being technical" when I told them that they were supposed to give a thirty minute call ahead of time. "You want to be technical, fine we can get technical" was his exact response). I immediately called the main office where Cody--who was the only reasonable person in the entire situation--apologized and said he'd take care of the situation. Unfortunately, Cody's boss and Paul insisted that because I didn't tell Paul that people had left (A. Yes I did, B. Doesn't matter, they were a half hour late) they would charge a rescheduling fee if they had to come another day. They ended up just leaving a blind (that was way too long) at my apartment that I would have to measure and cut myself. Paul was rude, impatient, insisted that his lateness was my fault, and projected all kinds of negative connotations onto my tone that weren't there. He also berated me for saying "Sure" instead of "Yes, affirmative", because saying "sure" made it "...sound like [I] thought [he] was wasting [my] time." I kid you not, this was literally what he said to me. Not only my tone had to be up to his standards, but also the words I used. One of the worst experiences I've ever had in any capacity. Never, EVER use this company!!

Description of Work
I needed a blind replaced in my living room.

Serving greater Los Angeles for over 35 years, and earning OVER 200 FIVE STAR REVIEWS and a 4.8 STAR RATING on HomeAdvisor, The Blind Spot is a premier blind, shutter and drapery, repair, sales and installation company. Though humbly named, The Blind Spot can design and execute even the most elaborate of drapery design, solve difficult applications, and provide unparalleled service. We also understand that sometimes just a bit of TLC is needed and that is why we are happy to offer REPAIRS at an exceedingly inexpensive price point. We are very proud of our prompt, professional service, and hope you will allow us to be a part of your design team.  …

Installation and Replacement of Window Treatments, draperies, and wood shutters. I got started in the window covering business in 1973 with my family. During the early years of the company, we focused on manufacturing custom window coverings for our commercial accounts. It was during that time that I began to master all the facets of the business. Knowing the products, how they were assembled, installing our products with our best technicians, and most of all, how to be a business owner. This earned our company a great reputation in the industry including exemplary A+ ratings from the Better Business Bureau and many glowing testimonials from our family of clients. In 1979, I had a vision of branching out on my own, and started a retail window covering operation called, The Window Blind Connection. We specialize in Custom Blinds, Shades, Shutters, Draperies and Motorization, and we take great pride in offering the full experience for any window covering needs you desire. The full experience includes a free in-home consultation, bringing the showroom to you! We discuss design details, function and energy efficiency, light control issues, and then I assess the project on a personal and individual level. I help my clients discover the perfect solution to all their unique window covering needs, and not waste their valuable time. I develop long lasting relationships with everyone we do business with. I handle all of my clients with honesty, care and integrity. A new client is not a mere transaction, but an extension of our family. You should know, when working with The Window Blind Connection, that you will be cared for, and attended to, long after your window covering project has come to a beautiful and and successful end. We look forward to working with you, and adding you to our family! Neil Geller CEO and President  …

We provide for our customers the highest level of quality window coverings at fair and market competitive prices. To ensure the longevity and continued success of our company through repeat and referral business achieved by customer satisfaction attention to detail and service-minded attitudes. We offer free in home estimates.

California Blinds Company is currently rated 1 overall out of 5.

California Blinds Company offers the following services: We provide for our customers the highest level of quality window coverings at fair and market competitive prices. To ensure the longevity and continued success of our company through repeat and referral business achieved by customer satisfaction attention to detail and service-minded attitudes. We offer free in home estimates.

Are there any services California Blinds Company does not offer?