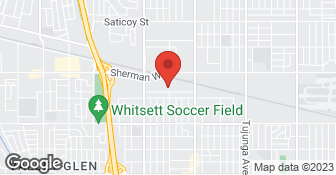 We are a custom manufacturer of commercial and residential awnings, canopies, cabanas, aluminum canopies, window treatments, drapes, and canvas products, We have over 20 years experience in specialty fabrics industry and focus on design, metal fabrication, industrial sewing, and installation. We are bonded, licensed, and fully insured CA state contractor (CA Lic. #752517...

The owner is very nice and the company did a great job replacing our awning. Plus after meeting with a few other companies they were ready to meet any price better then theirs and in the end finalized us out at $150 less then the competitor. So we got what we wanted saved money and are getting ready for summer ahead!

Description of Work
They never called or came out!

Vince, the owner, is a nice man. It's kind of a small operation so you will often be dealing with Vince, or his son. We met a couple of times for an estimate and measuring, which happened quickly. I paid half up front. It took more time than I expected for the awning to be built. Eventually they came to install it. There were 3 or 4 guys. Vince left his son and other guys to finish the installation. They weren't as knowledgeable, nor as particular, as Vince so I had to ask them a few times to patch things up to look better. Since then, the retractable awning has been working great. We'll probably use it more over the spring and summer, but we've used it a few times. It took Vince quite awhile to get me the warranties, but they finally arrived today. Overall, I would use Cal Shades again. I like supporting small businesses, Vince knows his stuff, his product is high quality and his price is competitive.

Description of Work
Installed retractable awning for our backyard pergola.

Great. Initial appointment to discuss what we wanted included measurements, estimate and final plan. Representative was prompt, knowledgable, friendly and efficient. Awning installation was within estimated time of arrival and the crew was prompt and efficient. We love the awnings.

Description of Work
Designed, constructed and installed awnings to a single family home plus a 4 unit rental property.

Description of Work
It has been longer than your calendar goes back since I used them.

It went great. Their price was reasonable. They were quick, they respond to my call, on time and did the installation.

I am an architect and my client requested three exterior canvas awnings over three doors. I contacted three awning companies for bids. Vince Nazliyan of CalShades was able to meet me right away at the project and go over it all in detail. He took measurements and explained exactly how he would complete and install the project. His pricing was competitive and he clearly knew what he was talking about. He was very efficient. Other companies I called were obviously much larger companies, with multiple people involved. I liked dealing directly with Vince. Communication was therefore direct and less chance of error in construction. The job came out exactly as we wanted and my client was very happy. I want to add that I have very high standards about work done on my projects, and so I make sure my contractors do as well. The general contractor was pleased with Cal Shade's work and subsequently asked Vince to price more canvas work for the project.

Cal Shades came to my house in Venice to do an estimate and had several suggestions on what awning would work in the space i needed. Their price was very competitive and they had a much shorter lead time then the other awning companies I used to get estimates from. They also had very competitive pricing. The installation was done professionally and quickly. I would 100% use them again and recommend them to anybody looking for awning work.

Description of Work
Awning over a French Door to my Guest House to protect from rain.

I called two other Awning Companies and received estimates which were $200 more than Calshades. Vince came over within a day of when I called. Once I engaged Calshade they gave me excellent turnaround time -- about a week. The other two companies told me times of 3 to 4 weeks. Overall I was very pleased with the company and highly recommend them for awing work.

Description of Work
Replaced my old awning with new canvass.

US Awnings & Canopies is the preferred Awning manufacture Nationwide, we are a leading retailer for retractable and stationary awnings for three main reasons: * Excellent support and service. * Superior-quality and unique products. * Affordable prices for Commercial and Residential Awnings. * Possess the knowledge and expertise to complete any style of awning throughout the entire United States. US Awnings & Canopies is committed to a tradition of, quality product and personalized service. For over two decades, US Awnings & Canopies has proudly manufactured, installed and shipped beautiful, durable retractable and stationary awnings as well as other sun, wind, rain and snow protection systems to a diverse clientele. Our customers range from home owners to business owners to interior designers, architects, and contractors and large corporations. US Awnings & Canopies has sold thousands of retractable awnings, retractable canopies, and other exterior sun, wind, rain and snow protection systems nationwide. We have an established trade network of the finest domestic and international suppliers to provide the best available retractable awning systems components in a variety of designs, styles, options and accessories, and complexities. We provide an overwhelming variety of Awning styles and fabric colors. US Awnings & Canopies is family-owned and operated, with over 20 years combined experience in the Awning industry. We bring the best of our experience and passion to our customers every day.  …

Serving greater Los Angeles for over 35 years, and earning OVER 200 FIVE STAR REVIEWS and a 4.8 STAR RATING on HomeAdvisor, The Blind Spot is a premier blind, shutter and drapery, repair, sales and installation company. Though humbly named, The Blind Spot can design and execute even the most elaborate of drapery design, solve difficult applications, and provide unparalleled service. We also understand that sometimes just a bit of TLC is needed and that is why we are happy to offer REPAIRS at an exceedingly inexpensive price point. We are very proud of our prompt, professional service, and hope you will allow us to be a part of your design team.  …

Bonded
Insured
All statements concerning insurance, licenses, and bonds are informational only, and are self-reported. Since insurance, licenses and bonds can expire and can be cancelled, homeowners should always check such information for themselves.To find more licensing information for your state, visit our Find Licensing Requirements page.
General Information
Free Estimates
Yes
Eco-Friendly Accreditations
No
Payment Options
Check, Visa, MasterCard, American Express
Warranties
Ask for Details

How is Cal Shades and Awnings Inc overall rated?

Cal Shades and Awnings Inc is currently rated 4.5 overall out of 5.

What days are Cal Shades and Awnings Inc open?

What payment options does Cal Shades and Awnings Inc provide

No, Cal Shades and Awnings Inc does not offer eco-friendly accreditations.

Are warranties offered by Cal Shades and Awnings Inc?

No, Cal Shades and Awnings Inc does not offer warranties.

What services does Cal Shades and Awnings Inc offer?